This event is one of those extravaganzas that has critics out in droves… but it will likely do bang-up business at the gate and make a bunch of folks a mini mountain of loot.

Purists are already clenching those teeth, grinding molars to dust, as this piece of the Logan Paul vs. KSI rematch, to unfold Nov. 9, in LA, at Staples Center, piles up characters.

Truth be told, if you must know, even within this Ring (virtual) building, there is no shortage of folks thinking that the battle of the YouTube “sensations” is more something along the lines of a high-voltage storyline on The Kardashians reality series… something to be glossed over, summarily dismissed, eaten and dissected by ninnies and buffoons only.

But here’s the thing… that argument can’t be arbitrarily dismissed, because yes, some of us get it why purists are feeling nauseous about the YouTuber clash.

Probably it’s because of the play it’s getting. The 24-year-old Ohioan Logan Paul, the buff provocateur, who has made impressive bank off people checking out his low-fi, high-narcissism videos, and 26 year old Englishman “KSI,” who does music after finding his groove as a gamer guy and did videos obsessing on video-gaming will headline at Staples Center. This, after they clashed Aug. 25, 2018, and did 21,000 butts in seats at the Manchester Arena in England. AND the rematch will be offered on the DAZN platform, home to Canelo Alvarez, Gennady Golovkin and Anthony Joshua. Two lads who got famous in an era where that can happen in the blink of an eye in puzzlingly curious circumstances – if you are 40 or over and haven’t fully realized the many ways the world has changed.

OK, purists will also be irked that Paul and KSI, real name Olajide Olatunji, will be granted professional licenses, so they can fight a six-rounder at cruiserweight, sans headgear. And the duo, who have 40 million YouTube subscribers between them, will be paid ridiculously handsomely for the effort to boot. (No, not Canelo or GGG money, so there’s that.)

Hey… maybe, a teensy-tinsy bit of the blowback has to do with envy? Anyway….

Both fellas seem to have a knack for solid trash talking: “Finally, after over a year since our rematch, I get to enter the ring once again to fight Logan Paul,” said KSI, in a release that went out Sept. 3. “If I’m being honest, I didn’t fight well at all in the first fight, and even then, I still managed to draw against him.

“This time I won’t make it so close, especially now that it’s a pro fight, no head guards and 10oz gloves [laughs]. The time to end him is nearing. I can’t wait to see the memes of him slumped on the ground after I’ve repeatedly beaten the life out of him. He’s facing a different animal this time. He will soon realize.”

Paul also tossed a nasty flurry: “I’m excited to ruin JJs face and I want to thank DAZN for giving me the platform to do so. Last fight, KSI couldn’t beat me with only three months of training under my belt. For the past year, while JJ has been wasting his time trying to become a rapper, I’ve been training every single day. I’m finally getting what I wanted from the beginning – no headgear, 10oz gloves, and the opportunity to dismantle JJ’s repugnant face in Los Angeles, my home city. After November 9, the embarrassment of losing will eat away at KSI’s ego for the next decade; he will be afraid to show face in America. This time, I won’t leave it up to the judges.” 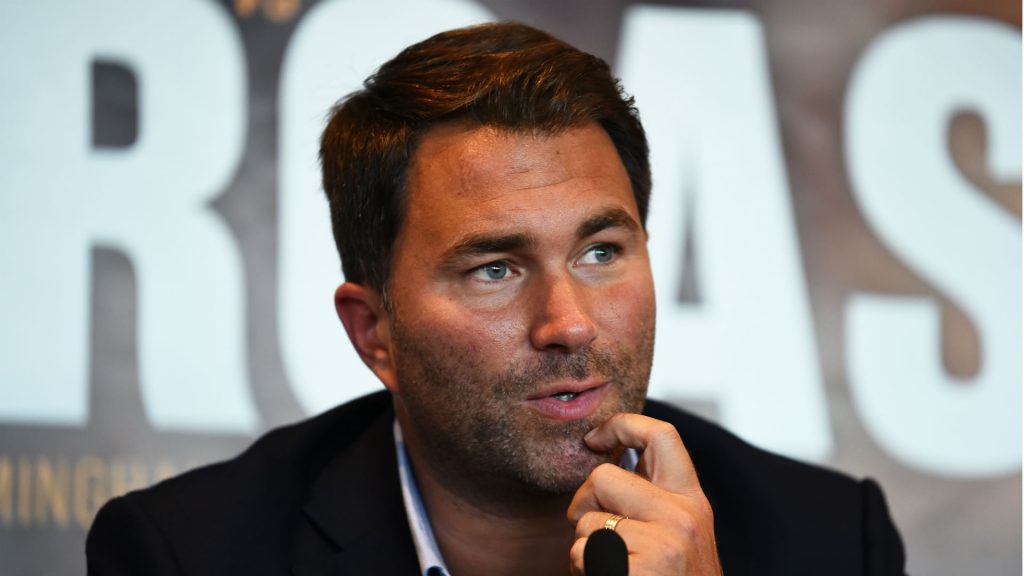 Eddie Hearn is front and center in helping this scrap reach another level, and he is unapologetic about the upsides of the YouTuber tussle. Notice how he skillfully uses his own 180-degree turn on the subject, to better help anyone on the fence about the legitimacy of the scrap come over to the DAZN side: “When the first fight took place, I smirked and pondered how embarrassing it would be to stage this event in a 20,000 seater arena. What I saw was a phenomenon; a sold-out arena, over one million PPV buys but, more importantly, an energy of a new audience to the sport of boxing. When I was asked to be involved in the rematch it got me excited but I had some requests to help integrate the two audiences. I requested that both fighters turn professional and undergo the same medicals that any other fighter would. I asked that the fighters lose the headguards and use 10oz gloves, if we are going to do this then let’s do it properly. Both men obliged and now they prepare for war on November 9 – this event will be huge, a world championship card beneath an event that will create a hype for boxing not seen in the U.S. for a long time. Staples Center will be sold out and a new audience will join our great sport and tune in live on DAZN.”

We get it! Hearn has got the dogs in the hunt, and he’s thinking that he can bring buzz to the brand, he can transition some fans of the new-age bizarro-celebs and make them real-deal boxing fans. Check this out – good-case scenario – Canelo may be fighting Sergey Kovalev the week before the YouTuber scrum. And the Anthony Joshua vs Andy Ruiz rematch is a month after. That can be pitched as good value in the years-end subscription drive. $20 a month, $100 for a year’s worth of content. At worst, a whole boatload of people who hadn’t heard of DAZN learn how to pronounce the streaming behemoth, which is seeking to beef up. But what about someone who has no dog in this hunt, but has been on the hunt for scores like this, if we are speaking in terms of trying to gross a healthy chunk of change? What does “The Bobfather” think of the Logan Paul vs KSI rematch?

“Let me tell you, I don’t know who the fuck those two guys are, and I don’t give a shit about them,” said Bob Arum. “If they make a buck in the ring, who the hell cares? There are things in life to get excited about and this is not one of them. Who gives a shit? People wanna pay to watch them, I take no issue. Now, I never heard of them, but that shows how far removed I am from popular culture.”

OK, so maybe Hearn can snag some new eyeballs to the sport?

“That ain’t gonna happen,” the Brooklyn-born octogenarian told me over the phone on Wednesday. “They have these ‘beefs’ then they talk about setting up a fight to make a buck… the answer is, who cares? If people wanna watch, wanna pay, God love ’em.”