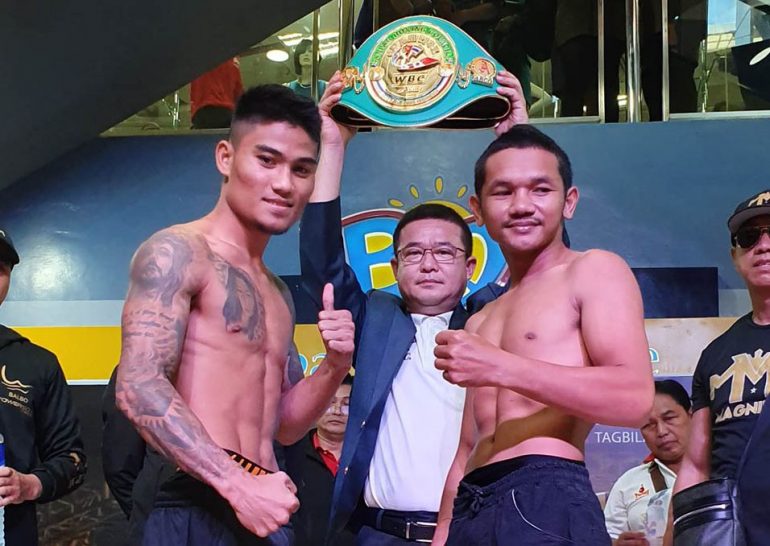 The scores were a 120-108 shutout on two cards, while the third found two rounds to give to Uthok – who fights under the ring name Pungluang Sor Singyu – for a scorecard of 118-110. The win keeps Magsayo (20-0, 14 knockouts) undefeated and earns him a minor WBC featherweight belt, which could help him improve off his no. 10 rating with the sanctioning body.

Magsayo has now won two straight in the past four months after sitting out 17 months following his departure from the ALA Boxing stable.

Though Uthok (53-7, 35 KOs), a two-time WBO bantamweight titleholder from Bangkok, Thailand, entered the fight with a reputation for defeating Filipino boxers, he seemed to be on the slide after jumping around weight classes in losses to Czar Amonsot and Paul Fleming in recent years.

Unlike his previous fight in April, when he looked impatient in a fourth round knockout of Erick Deztroyer, Magsayo, 24, remained disciplined throughout, boxing behind his jab while Uthok pressed forward without any real urgency, taking the power shots while offering one in return.

Uthok, 29, has now lost four of his last five bouts, beginning with his 2016 loss to Marlon Tapales.

The two traded smiles and exhibitions of sportsmanship throughout as the bout took on the texture of a sparring session. Magsayo focused most of his attack upstairs in the second half of the fight, sometimes throwing 3-4 hooks in a row and changing angles to try to get through the high guard of Uthok.

The fight was promoted by Vladimir Boxing Promotions, which is operated by Magsayo’s manager Vikram Sivapragasam, and broadcasted by livestream by Rappler.