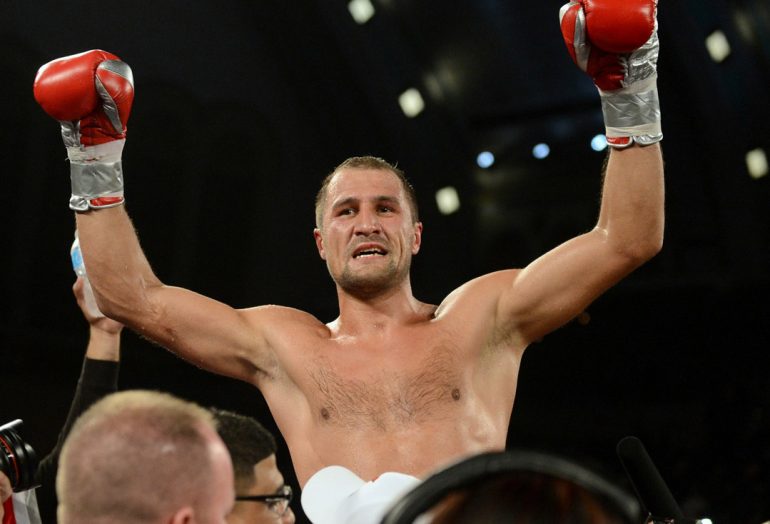 Sergey Kovalev went through hell against Anthony Yarde but retained his WBO light heavyweight title on an 11th-round technical knockout in a dramatic fight at the Traktor Palace in Chelyabinsk, Russia on Saturday. The official time was 2:04.

Kovalev, who is rated No. 2 by The Ring at 175 pounds, was rocked by scores of vicious power shots in the eighth. It’s a miracle that the Russian veteran stayed on his feet, but he displayed the heart of a champion and put together a stunning comeback. The end came courtesy of a huge power jab from Kovalev that put the Englishman flat on his back in the 11th. 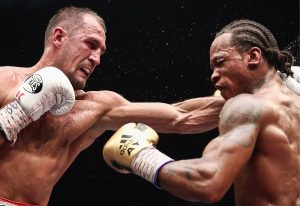 Kovalev connects with a left during an exchange with Yarde. Photo by Valery Sharifulin-TASS via Getty-Images

“You’re a great fighter, you have a great future,” Kovalev told Yarde after the fight. “He’s strong, he has I.Q., he just doesn’t have enough experience. I won because of my experience. I’m Sergey “Krusher” Kovalev. There will be no more defeats. He’ll be a champion one day, 100 percent.”

From the opening bell, Kovalev worked behind an educated left jab. The challenger was competitive, but he was never going to get any favors fighting away from home and more was needed. By the fourth, Kovalev was landing cleaner blows and adding more power to the strikes. Suddenly, Yarde looked out of his depth.

However, the Englishman displayed incredible guts and roared back in the fifth, upping the pace and targeting Kovalev’s body. Yarde may not have won the session, but he was in the fight and making the titleholder work for every bit of success he could get. The seventh was another good round for Yarde. He put his hands up and walked Kovalev down, working the body almost exclusively, and the shots were having an effect.

It was the eighth, however, that was unforgettable. The body punching from Yarde opened up Kovalev’s head and the Englishman took advantage, landing with crushing hooks and right hands. Kovalev was hurt, woozy and perilously close to being stopped. The bell ending that frame must have sounded like a symphony orchestra to the home support.

But as incredible as that Yarde burst was, Kovalev was about to produce a near-miracle himself. Perhaps aided by the challenger punching himself out, the Russian boxer-puncher came out and applied the experience he’d gained from 16 world title fights. He got back behind his jab, refueled and took command, winning the session hands down. 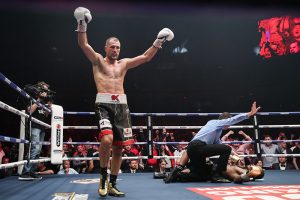 Photo by Valery Sharifulin-TASS via Getty-Images

Suddenly the Londoner was running on fumes. The colossal effort in the eighth had drained him of energy, whereas Kovalev had a second wind. There were scary moments in the 10th for Yarde, and the writing was the wall entering Round 11.

The 36-year-old Kovalev (34-3-1, 29 knockouts) could now be in line for a superfight against middleweight champion Canelo Alvarez. The matchup has been mooted for several weeks and Kovalev, a natural light heavyweight, would certainly be an ominous roadblock on Alvarez’s road to boxing history.

Yarde (18-1, 17 KOs) came into this fight with non-existent experience at top level. He’s got experience now and it’s up to him how he utilizes that. Does he regroup, improve as a fighter and become a factor at 175 pounds, or has he reached his ceiling? After that performance, the odds are that we’ll be hearing plenty more from Yarde.