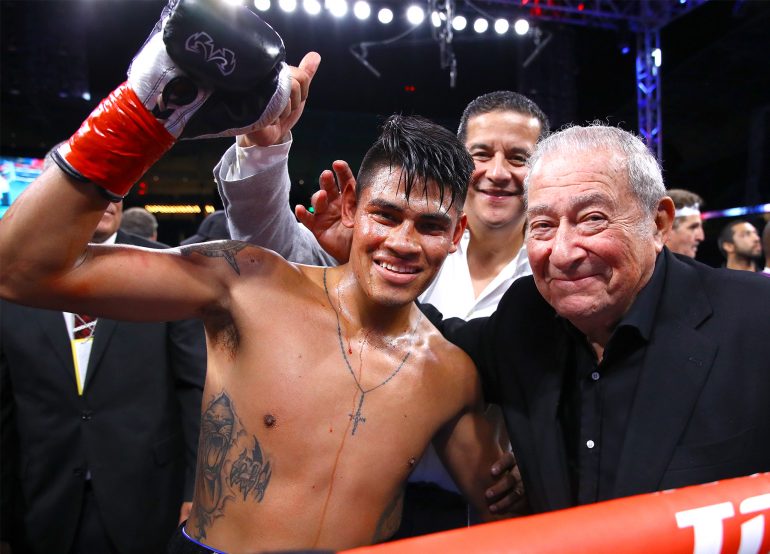 With the victory, Navarrete successfully defended his WBO junior featherweight title and improves to 28-1 (24 knockouts).

Navarrete was making the second defense of the title he won on Dec. 8 by defeating Isaac Dogboe in New York City. Navarrete faced Dogboe in a rematch on May 11 in Tucson, stopping Dogboe in the 12th round.

De Vaca was taking a significant step-up in opposition against Navarrete. The 24-year-old De Vaca had only fought two 10-round bouts and had not fought since defeating journeyman Ernesto Guerrero by decision on Feb. 23. 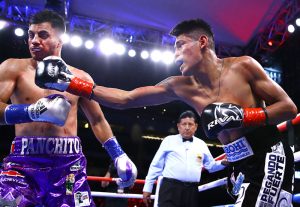 A slow-starter, Navarrete stood in the pocket and traded with De Vaca, mixing his attack to the head and body. Navarrete’s punches began to make an impact as De Vaca’s nose began to produce blood.

Navarrete scored a knockdown during the final moments of the second round, landing a right cross to the head of De Vaca that dropped him onto his back. De Vaca was able to beat the count.

Sensing he was still hurt, Navarrete went in for the kill as the bell sounded to start the third round. Although he was fighting back, De Vaca began to take severe punishment as Navarrete’s punches snapped De Vaca’s head back a handful of times in the round.

Moments later in the round, Navarrete pinned De Vaca against the ropes, letting his hands go until referee Raul Caiz, Sr. stepped in and stopped the bout at 1:54.

“De Vaca showed his fighting heart,” said Navarrete after the fight. “He gave 100 percent in the ring tonight.”

Navarrete’s performances over his last several fights have put him amongst the top fighters at 122 pounds. Prior to Saturday’s fight, Navarrete was adamant about unifying the junior featherweight division against WBC titleholder Rey Vargas or IBF/ WBA titleholders Danny Roman.

Navarrete hopes he could be a part of the fight cards.

“I want to continue the tradition of Mexican boxing in Los Angeles,” said Navarrete, who resides in Mexico City. “I want to fill arenas and follow in the footsteps of Mexican legends.”

During the post-fight interview, promoter Bob Arum announced Navarrete will return to the ring on the Tyson Fury-Otto Wallin fight card, which will take place at T-Mobile Arena in Las Vegas on Sept. 14.

“The best fighter in Mexico will be in Las Vegas (on Sept. 14) to defend his title,” announced Arum.

“I want to thank Bob Arum and Zanfer Promotions for the opportunity,” said Navarrete, who has not lost since a decision loss Daniel Argueta in his sixth fight as a pro in July of 2012.

De Vaca, who is originally from Michoacan, Mexico and now resides in Phoenix, falls to 20-1 (6 KOs). De Vaca entered the fight ranked No. 11 by the WBO.