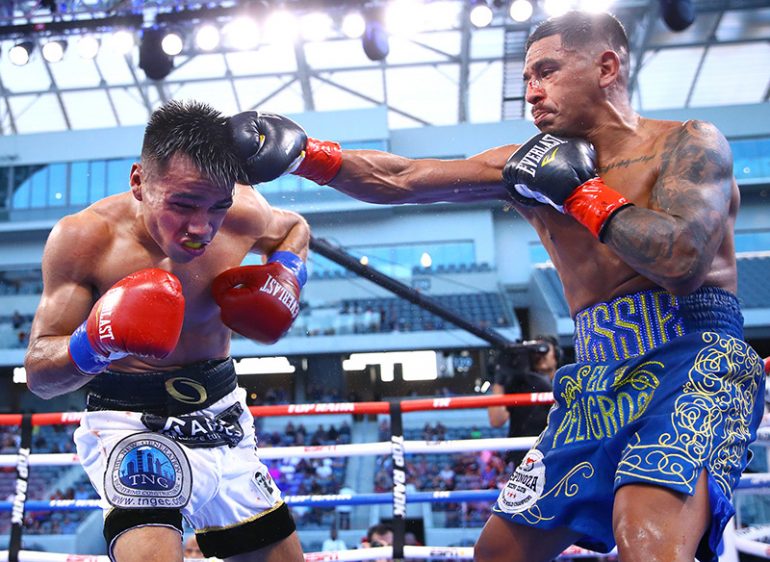 With the victory, Magdaleno improves to 27-1 (18 knockouts).

Rivera (27-4-2, 18 KOs) challenged WBA featherweight titleholder Leo Santa Cruz on Feb. 16, losing by unanimous decision. Rivera bounced back from the Santa Cruz loss to knock out David Godinez on May 31 in his hometown of Tijuana, Mexico.

The southpaw Magdaleno exerted a lot of energy and aggression during the first two rounds, closing the distance and putting Rivera on the defensive. The pace of the fight slowed, but Rivera became the aggressor while Magdaleno looked to counter to the head and body.

During an exchange in round three, an accidental clash of heads opened a cut on the bridge of Magdaleno, who did not look visibly bothered by the blood that oozed out afterwards.

An odd sequence occurred in round five as Magdaleno went down to the canvas, holding the back of his head. Replays showed Rivera landed an inadvertent punch and elbow behind the back of the head of Magdaleno. Referee Thomas Taylor did not admonish Rivera or deduct a point for the foul.

With less than a minute left in round seven, Magdaleno staggered Rivera with a left to the head. Rivera attempted to hold on, but Magdaleno was not able to land a significant blow to finish off Rivera.

Magdaleno did score a knockdown within the opening 30 seconds of the ninth round, dropping Rivera with a short overhand left to the head. Rivera did not look visibly hurt, fighting on and attempting to close the distance on Magdaleno.

Towards the end of the round, an inadvertent elbow by Rivera landed above the right eye of Magdaleno, opening a cut that produced blood. Referee Thomas Taylor stopped the bout at 2:55 after a ringside physician told him to stop the fight.

Because the fight was stopped by an accidental foul, the fight went to the scorecards, including the ninth round. Scores were 89-81, 89-81, and 88-82 for Magdaleno, who resides in Las Vegas.

The 27-year-old Magdaleno, who is ranked No. 3 by the WBO and No. 6 by the WBC, believes he is ready for a world title shot.

“I’m ready to fight for a world title belt,” said Magdaleno, who is managed by Frank Espinoza. “I want them all (world titleholders). It don’t matter.”