Icelandic heavyweight Kolbeinn Kristinsson fights for his right to fight 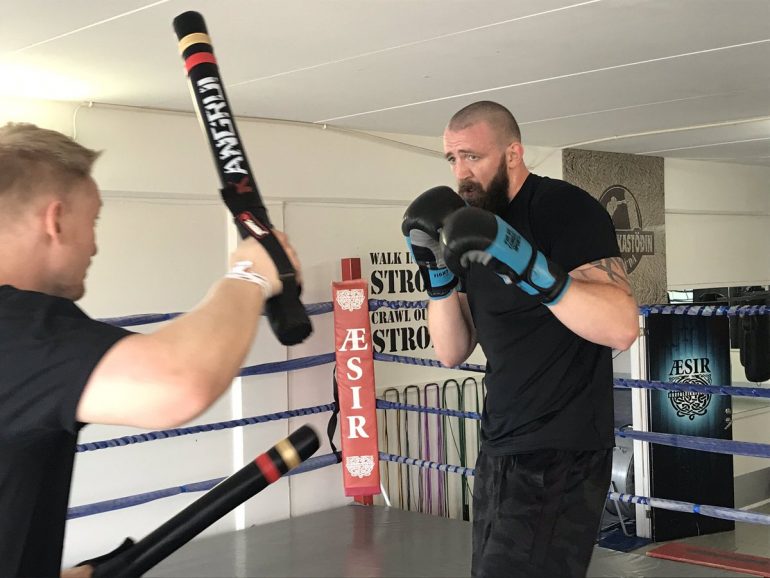 REYKJAVIK, Iceland — It’s plain to see that Kolbeinn Kristinsson is in the mood to hit something as he moves around the ring at Hnefaleikastöðin ÆSIR (which translates loosely to boxing gym of the Norse gods), located on the outskirts of Reykjavik, Iceland’s capital.

Holding the punch sticks for the 6’6”, 250-pound heavyweight is the much smaller Arnór Már Grímsson. Though Kristinsson is disciplined and restrained, he often adds on to the combinations put forward by his assistant, hitting him in the hip and shoulder just hard enough to let him know he’s there.

“He came here to help me and I hit him. That’s not very nice,” jokes Kristinsson (11-0, 5 knockouts) as he finishes up his five round workout.

Kristinsson is used to holding back in the ring. Coming from one of the few countries where pro boxing is still banned, there are very few boxers for him to work with, and none of them are heavyweights. He will sometimes get in the ring with his personal training clients and move around with them, allowing them to throw at him while he offers back an occasional jab to keep them honest.

But it’s not the same as full contact sparring.

“I’ve coached them so they know how to move, but they’re not good enough to have any contact,” says Kristinsson.

The scarcity of Icelandic boxers begs the question: Why?

“I’m a unicorn,” said Kristinsson, laughing at his unlikely situation.

“I say I’m from Iceland and they think it’s Estonia, because they can’t fathom that there’s boxing in Iceland,” said Kristinsson.

There were few socioeconomic indicators that would suggest Kristinsson would find his way to boxing. One of five siblings, he grew up in a middle class home with two parents who worked office jobs. They didn’t have anything fancy, he says, but they didn’t want for anything, either.

Heavyweight boxer Kolbeinn Kristinsson (@IceBearBoxing) getting in a workout in Reykjavik pic.twitter.com/sH3au50hVt

As a kid he had played soccer and handball (a sport popular in Europe that is like futsal with hands), but found himself overweight and out of shape at age 18 while working in a warehouse. One of his coworkers, Skuli Armannsson, who had a single pro fight in 2008, took one look at his long arms and figured he’d be a handful for other boxers.

“I lost my first 3 or 4 fights, then I started winning,” recalled Kristinsson, who started at 200 pounds and then moved to heavyweight, slowly wiping out the competition at home. To find amateur fights, he’d fly to Denmark and Sweden, paying about $1,000 per round trip flight to fight even just one unpaid fight, often against the top heavyweights in those countries.

Boxing wasn’t the only career path he explored. He finished aviation school and made it halfway through his flying lessons with small private planes, but found the lessons too expensive. He also worked as an electrician, which offered more immediate income, but none of it gave him the rush like boxing.

After 40 amateur fights, 20 of which were overseas, he decided to turn pro in 2014. His fights have been at the four- and six-round level in countries like Sweden, Finland and Denmark, though he’s sunk far more money into boxing than gained from it.

“We had to beg people to be on their cards,” said Kristinsson, who estimates that he’s $50,000 in the hole to advance his career, with perhaps another $50,000 in lost wages he would have made had he stuck to work as an electrician.

“It’s a struggle. Right now I don’t have a manager. Even before that, I don’t have promotional or financial backing. We have to go back to people, ‘Can we please be on your card, we will pay for the opponent, you don’t have to pay me anything?’”

The frustration doesn’t end even when he’s in the ring. Kristinsson made similar arrangements to face Gyorgy Kutasi (4-11, 2 KOs) on June 29 in Dunaújváros, Hungary.

He knocked his opponent down twice in the first two rounds before it was stopped at the 1:05 mark of the second. Though video of the fight exists, the fight has yet to be added to Boxrec, which has had issues in several European countries due to fights being fabricated to pad records.

An email to Marina Sheppard, who runs the record keeping site, never received a response regarding the omission.

Kristinsson hasn’t only had to fly to fight; he’s done the same for sparring. He joined Robert Helenius in Finland, prior to his most recent fight to get in some gym work, and had spent time sparring with German heavyweights Erkan Teper and Agit Kabayel, plus the unbeaten Filip Hrgovic of Croatia.

Prior to turning pro, Kristinsson traveled to Los Angeles and Las Vegas to see if he could hold his own with more experienced fighters.

“I saw the pros working out and I said they’re not much better than me,” said Kristinsson.

“I sparred Ismayl Sillah. We were similar weight, and he was one of the top prospects of the time. I said he’s better than me, but not much better. I went to Vegas to train just to develop more, sparred with pros and beat them up. It established that I’m gonna go pro.”

He’s never had a promoter, he had a “falling out” with his most recent manager, and has often had to train alone because of the lack of quality coaches in Iceland. The latter began to change when he linked up with Javan “Sugar” Hill, the nephew of the late Emanuel Steward who has reopened the KRONK Gym at a new location in Detroit.

Their two week introduction minicamp changed his mindset on boxing, Kristinsson says. He rejoined Hill for a month-long camp earlier this year in Boca Raton, Fla., when Hill was training Anthony Dirrell for his WBC super middleweight title victory over Avni Yildirim.

Since he started boxing he dreamed of being heavyweight champion, even keeping a photo of George Foreman holding the Ring Magazine championship as his phone’s background photo. Yet, as the division heads toward another Golden Era, Kristinsson can only watch from a distance as others get the opportunities he craves.

“I’m not that different from [Anthony] Joshua when he came up in the system. Just a hard worker, who’s smart and listened to his coaches. But he got all the money and opportunity and I got none of the opportunity. He was world champion and I’m struggling to get a fight.”

Being prohibited from practicing his trade in his country means more than not having friends and family being able to witness his fights in person. The lack of visibility means a lack of media attention, which hurts his ability to attract sponsors.

“More media attention would mean it’s better for abroad,” said Kristinsson. “If I’m like a ghost over here, then I’m also a ghost everywhere else.” 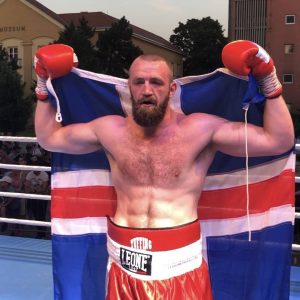 Grímsson, who was in Kristinsson’s corner in Hungary, sees the fight to end prohibition as parallel to that which Gunnar Nelson, the Icelandic mixed martial arts fighter competing in UFC, has undertaken. Nelson’s fame in the UFC has led to a boom in the sport’s popularity domestically, and has given life to his dream of a UFC event in Iceland.

“I think we just need fighters who are successful, then people will start liking it,” said Grímsson, a national champion at three weights. “People will start fighting for it, and eventually the ban will get lifted. It’s just a sport like anything else.”

Pro boxing has been banned in Iceland since 1956, a few years before a Nordic fighter named Ingemar Johansson became the region’s only heavyweight champion. It wasn’t until 2002 that amateur boxing was legalized, a concession that came after a 13-year battle, according to a 2015 article in Icelandic Review. At the time of that publication, 700 boxers were estimated to be active in the nation of around 340,000 people.

The sport had been banned at different times by countries over safety concerns, but countries like Sweden (2007) and Norway (2015) have taken a more libertarian view of the sport in lifting their prohibition, leaving Iceland as the only nation in its region to uphold the ban. Other countries like Cuba and China, which banned pro boxing because they saw it as incompatible with communist ideology, have also nixed bans.

He understands why the sport’s inherent dangers turn people off, but he also sees it as a personal liberty issue where adults should be able to assume their own risks.

“You shouldn’t control what people do,” said Kristinsson. “You have free will. You can smoke, you can drink alcohol, you can jump from a building, it’s not illegal, but you can’t do a sport?

“I kinda get why they want to ban it because it’s dangerous, but so is drinking alcohol.”

An email seeking comment was sent to the office of Iceland’s president, Guðni Jóhannesson, though he declined to comment in a message sent by the Secretary General.

As his country’s de facto most accomplished pro, Kristinsson believes he can affect change if he can achieve success abroad. Though, he sees it more likely that certain pros will be granted exemptions to box.

“The amount of public pressure, I think that’s the thing. I have to do extremely well,” said Kristinsson. “If I win a title abroad and then I go make pressure, like I want to defend it at home but I can’t. That makes pressure because they want votes in parliament.”

Boxing remains an afterthought in Iceland, which is a soccer loving country that is best known for its disproportionate contributions in strongman competitions. Put some gloves on a few of those strongmen and Kristinsson thinks Iceland can make an impression in boxing as well.

Until then, Kristinsson waits for the day when getting to the ring isn’t the hardest part of his profession.

“Before people used ask me ‘Are you still boxing, are you still doing that?’ Like it was a joke,” said Kristinsson. “But now I’m getting a little bit more recognition and people are respecting it.

“I’ve been very driven to do this, a lot of sacrifice. I believe in the end it will pay off.”