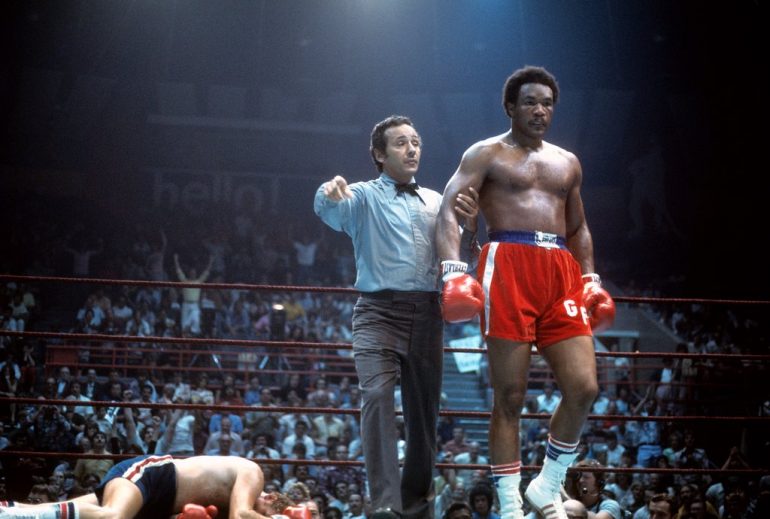 Foreman finishes LeDoux. Photo from The Ring archive.
14
Aug
by The Ring

On August 14, 1976 former heavyweight champion of the world George Foreman faced off against durable contender Scott LeDoux at the Utica Memorial Auditorium in Utica, New York.

LeDoux, never known for his defensive qualities, stood up to the best Foreman could offer for two rounds before succumbing to a crushing third-round knockout in the third.

This was Foreman’s third bout since being spectacularly knocked out in eight rounds by Muhammad Ali in October 1974 in Kinshasa, Zaire. The hard hard-hitting Texan was coming off impressive stoppages over Ron Lyle – in a classic Las Vegas slugfest – and Joe Frazier in a rematch.

Shortly after dispatching LeDoux, “Big George” would halt John Dino Denis in four rounds. His four devastating performances in the year 1976 led to Foreman being named The Ring Fighter of the Year.

A professional for almost a decade, LeDoux’s best performances came against future heavyweight champion Leon Spinks in 1977 and former heavyweight titleholder Ken Norton in 1979. Both bouts were scored split decision draws. In his lone heavyweight title challenge, he was stopped in seven rounds by Larry Holmes.

The Minnesota-born LeDoux passed away following a long battle with ALS (Lou Gehrig’s Disease) in 2011.