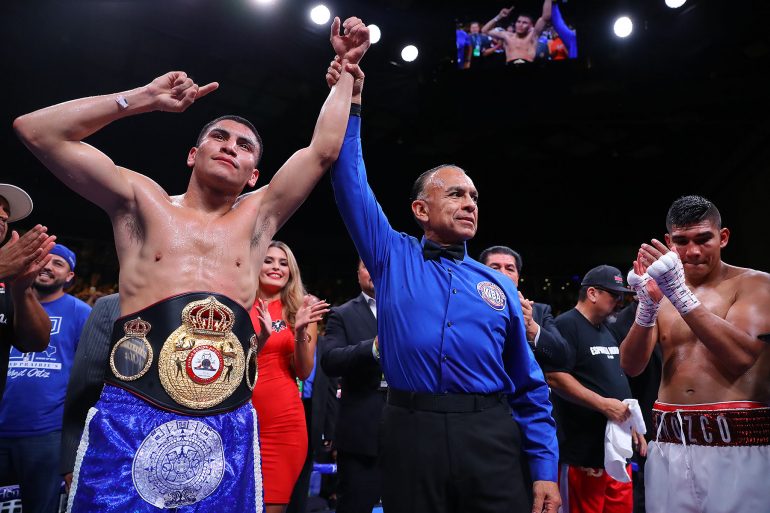 Vergil Ortiz celebrates the best victory of his budding career, so far, a sixth-round TKO of Antonio Orozco. Photo by Tom Hogan
10
Aug
by Michael Montero

Undefeated welterweight Vergil Ortiz Jr. graduated from prospect to contender in from of his hometown fans in Grand Prairie, Texas on Saturday. After five competitive rounds with good two-way action, Ortiz dropped Orozco three times before scoring a TKO win in sixth.

It was the main event of a Golden Boy Promotions card streamed live on DAZN in the U.S. 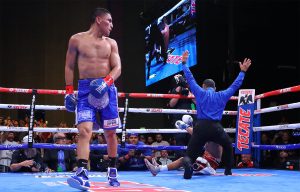 Ortiz’s KO streak continues at 14 in a row. Photo by Tom Hogan

Ortiz came out guns blazing in the first round, backing Orozco into the corner in the opening moments with a flurry that had the fans on their feet. But the veteran from San Diego showed his experienced and weathered the storm. Both men boxed in the center of the ring for the most part early on. Ortiz would occasionally back into the ropes in attempts to set up counters against Orozco. Although each fighter had their moments in the early rounds, it felt like the naturally bigger Ortiz was doing more damage when he connected.

The pace steadied a bit as the middle rounds approached. Orozco stayed low, covered up and landed enough offense to give his younger opponent plenty to think about. Ortiz had never been past the fifth round prior to Saturday’s bout. The 21-year-old, showing marks on his face and a trickle of blood from his nose, came out in the sixth round with a sense of urgency.

A minute into the round a beautiful left uppercut from Ortiz dropped Orozco in the center of the ring. Seconds later a follow up combination had him down again. Ortiz, like a shark smelling blood, once against pounced on his veteran opponent, dropping him a third time with 45 seconds remaining in the sixth. Referee Mark Calo-oy waved the fight off without a count, giving Ortiz the TKO victory.

Although there were some nervous moments, it was an extremely impressive performance by Ortiz, who improved to 14-0 (14 KOs) with this win. Orozco, who had never been stopped before facing Ortiz, fought very well but simply could not recover once he was caught. Ortiz landed 115 total punches to Orozco’s 57 (91-48 power connects). He had mixed reviews of his performance after the bout.

“In the first round I got a little excited, I had to force myself to slow down,” Ortiz said. “I’m going to learn from this fight.”

Trainer Robert Garcia spoke highly of their opponent. “Orozco came to fight tonight,” he said. “What he did today, he deserves credit. He was coming in low; he had a great game plan.”

Ryan “Kingry” Garcia may have more followers on Instagram but make no mistake about it, Vergil Ortiz Jr. is the best young fighter in Golden Boy Promotions’ stable. The future is bright for the hard-hitting welterweight from Grand Prairie, Texas.