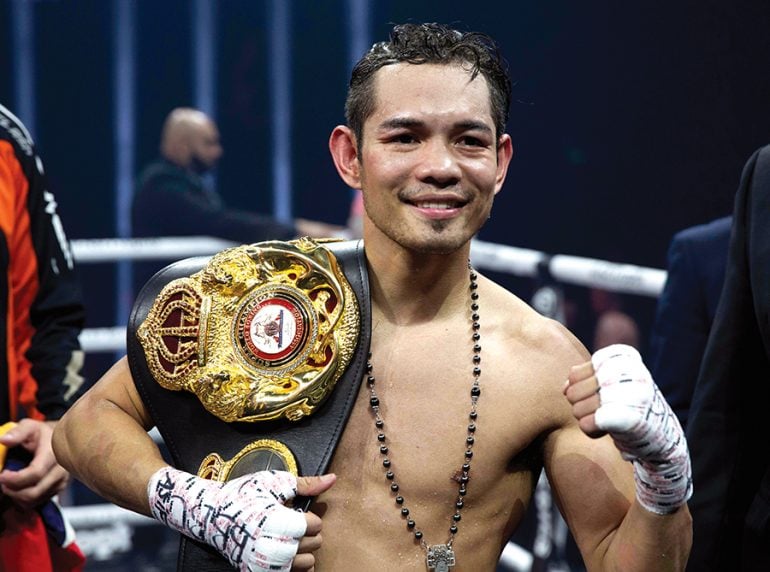 Editor’s Note: The following feature appeared in the September 2019 issue of The Ring.

FROM FLYWEIGHT TO FEATHERWEIGHT, NONITO DONAIRE RECALLS HIS BEST WINS

Every bantamweight who entered the World Boxing Super Series did so with the view of building a legacy – with the exception of one.

Nonito Donaire entered the white-hot elimination tournament as a four-weight world titleholder with Hall of Fame credentials. “The Filipino Flash” simply sought a new challenge because he’s a warrior, because he loves the sport, and because he wants to add more icing to his cake. Donaire doesn’t need to build a legacy; that was secure a long time ago.

It was in July 2007 that Donaire announced himself at the elite level, knocking out previously unbeaten IBF flyweight titleholder Vic Darchinyan with a left-hook counter from hell in Round 5. Multiple belts followed at bantamweight, junior featherweight and featherweight. Such was the quality of Donaire’s performances that he was a permanent fixture in the top five of any pound-for-pound list worth reading.

Of course, there was adversity. Donaire dropped a unanimous decision to Cuban defensive wizard Guillermo Rigondeaux in April 2013, and there was a brutal sixth-round stoppage defeat at the hands of then-unbeaten power-puncher Nicholas Walters 18 months later.

But you can’t keep a good man down.

Donaire rebounded to recapture his old WBO junior featherweight title with a 12-round unanimous decision over Cesar Juarez in December 2015, and although he lost on points to Jessie Magdaleno and Carl Frampton, it is interesting to note that the 36-year-old boxer-puncher has never lost a fight at the bantamweight limit.

“I feel amazing at this weight class,” Donaire told The Ring. “My speed is back, and I have a lot of confidence. I made a great decision to go back to the weight I felt comfortable at. Making the bantamweight limit is actually quite easy for me.”

In his first WBSS appearance, Donaire claimed the WBA 118-pound title with a fourth-round stoppage of Ryan Burnett (the Belfast man suffered a back injury in what was shaping up to be a competitive fight). In his first defense, he produced a spectacular sixth-round knockout of Stephon Young (who replaced an injured Zolani Tete) to secure himself a place in the tournament final against Ring Magazine champion and IBF titleholder Naoya Inoue later this year.

“It’s a fight that’s been called for,” said Donaire, who feels that this particular matchup was predestined. “The best thing I can do is fight the best, and people look at Naoya in that light. People look at me in a different light because of what I’ve done in heavier divisions. But this is the best fight, and it had to happen. It had to be him and it had to be me. That’s something that I’m sincerely happy about. No other opponent could make me feel the way I do – so focused – because the guy in front of me is much more dangerous than the other guys in the tournament.

“It doesn’t matter to me (that I’m the underdog). I’ve nothing to prove to anyone else. It’s something that I’ve learned: No matter what you do, there’s always someone that’s just gonna write you off. Granted, the guy in front of me is Inoue, but that makes me train even harder. It’s more about what happens after the fact, when victory is there and the jaw drops to the floor. That’s my visualization in this whole tournament. I welcome everyone’s opinion, but I’ll work hard and do what I do best.”

There could be more glory in the future for one of the very best fighters of a generation, but Donaire was kind enough to go back in time with The Ring and review some of his past triumphs:

“He walked into the press conference with this Australian helmet and said even with me wearing a helmet I was going to get destroyed. To me, from that point, I just turned on the switch and wanted to hurt this guy. When I came to the ring, all I could think about was hurting him, and that took some of the pressure off me winning the belt. In the moment when I knocked him down, I still wanted to destroy this guy. I wanted him to get up so I could knock him down again. When I realized that I’d knocked him out, it was such a release and I just jumped around like a crazed madman. ‘Oh my God, I’m world champion.’”

“Moruti was a guy who was gonna come at me, so the plan was to box, box, box. But things happen, and on the week of the fight, I suffered an asthma attack and this fight was gonna be called off. It was a very bad attack and I couldn’t take any inhalers (because of testing). My doctor told me to pull out, but we went ahead with it. In the fight, I was cracking him with good punches when he was coming in, but my lungs were going; I could feel it. Somehow luck was in my favor. I hit him and opened up his eye, and I’d never seen an injury like that before. I was willing to give him a rematch, but we decided to move up in weight.”

“I trained really hard, and it was one of the most nerve-racking fights of my professional career. I knew the guy was really tough and anything could happen. But on the week of the fight, I started studying him more and realized something. I saw something in his style. And this is strange, but I told my guys, ‘I’m gonna knock him out in the second round.’ They’re like, ‘What?’ I said, ‘The moment I get his distance, I can land the biggest punch, because his head is right there.’ I told my guys to bet on the second round, and they won a few thousand dollars. It’s the only time in my career I’ve predicted something like that. I was very confident of pulling it off.”

“I couldn’t land really well, but I knew I was winning the fight anyway. I didn’t pursue (the stoppage) too much. If there was animosity between us, then I would probably have kept pushing and pushing for that knockout. But it became a very easy night. He was undefeated at that time, and I figured his record was important to him and that he would open himself up. Throughout the night, I just kept waiting for something that didn’t happen. He knew he was losing. His main goal going into the fight was to survive Nonito Donaire. That’s what he said in Spanish, so I read him well.”

“He pushed me at the press conference before the fight, and I pushed him back. At that moment, we were about to go at it, and that’s the only time during my career that I’ve almost had a scuffle outside of the ring. I wasn’t just going to back off. I’m a fighter, and I always conduct myself well, but if you put yourself in that territory, in my zone, if you’re getting in my space, then that’s a different story. It could be a punch in the face. It could be a kick in the leg. I don’t know. (laughs) Just be aware that I’m gonna hit something. I’m not a pushover when someone tries to bully me. Also, the Vazquez fight wasn’t close; I won more rounds, and the (split) decision baffled me.”

“I had a lot of respect for Nishioka. He was a great fighter, and he had a lot of power in his hands. I trained really hard for that fight and was really pleased with my preparation. I thought he was the best in the division, so I trained as hard as I possibly could. I was also looking to leave the sport around that time. I’d had an easy night against Jeffrey Mathebula, but going to the gym was becoming a chore for me. It was actually the Nishioka fight that got me back up, because I had to really focus for the opponent. I studied him, and everything in the game plan worked. They were expecting the hooks, but it was the straight right hands that really opened him up – and the uppercuts.”

“A lot of emotion went into that fight. I’d dropped him (twice in Round 4), but somewhere around the fifth or sixth, I twisted my ankle really bad. I was limping and it hurt when I pushed off it, which diminished my power. The guy was really tough, and he kept coming and coming. From the eighth round to the 10th round, my body and mind was saying, ‘Man, you’ve done enough. You don’t need to prove anything else.’ My mind was telling me to call it a night, and I was like, ‘Get the hell outta here!’ That’s not me. You’ve gotta take me out for me to be defeated. I gave it all I had in the last couple of rounds, and that shows the faith I have in myself. It was tough, but that fight gave me the ray of light that I needed. I got the win, but I knew I could be even better.”