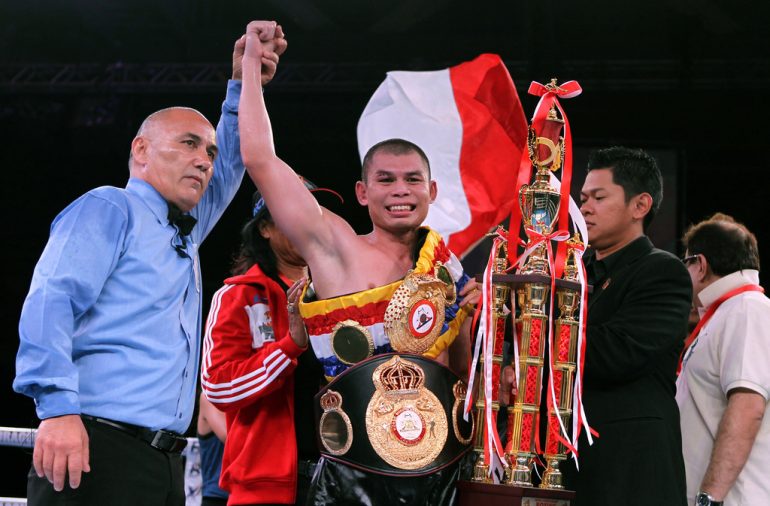 Chris John was a mainstay in the featherweight division in the 2000s through the early-2010s. During that time the skilled Indonesian held the WBA title for over 10 years and made 18 successful defenses.

John was born in Banjarnegara, Indonesia on September 14, 1979 and was one of four children. His father encouraged him and his younger brother to box from a young age.

“Growing up in Indonesia was tough for me and my family,” John told The Ring. “We didn’t have much money. My father didn’t have anything to give me but boxing, that’s all he knew, and he taught me discipline at a very young age. I used that for my whole career. I owe everything to my father.”

John wasn’t a renowned amateur and estimates that he had around 30 contests locally, with mixed success. However, respected trainer Sutan Rambing saw enough to convince the young novice to move to Semarang when he was 17 and work under his stewardship.

As well as boxing, John also practiced the Chinese martial art of Wushu, winning gold at the South Eastern Asian title in 1997. But boxing soon became the priority and he made his professional debut in June 1998.

In his 12th professional fight John gained invaluable experience that helped him later in his career. “I was 20 years old fighting Muhammad Alfaridzi at the Indosiar Studio in Jakarta in July 1999,” he recalled. “It was the hardest fight of my career, and one that taught me so much. It was for the national featherweight title. I was knocked down twice and had my nose broken in Round 1. I had massive bleeding, but I would never let this opportunity pass. As my father taught me, success is when opportunity meets preparation and I was well-prepared. In the 12th round I knew I had the opportunity for the knockout and had no option because so much blood was coming from my nose.” 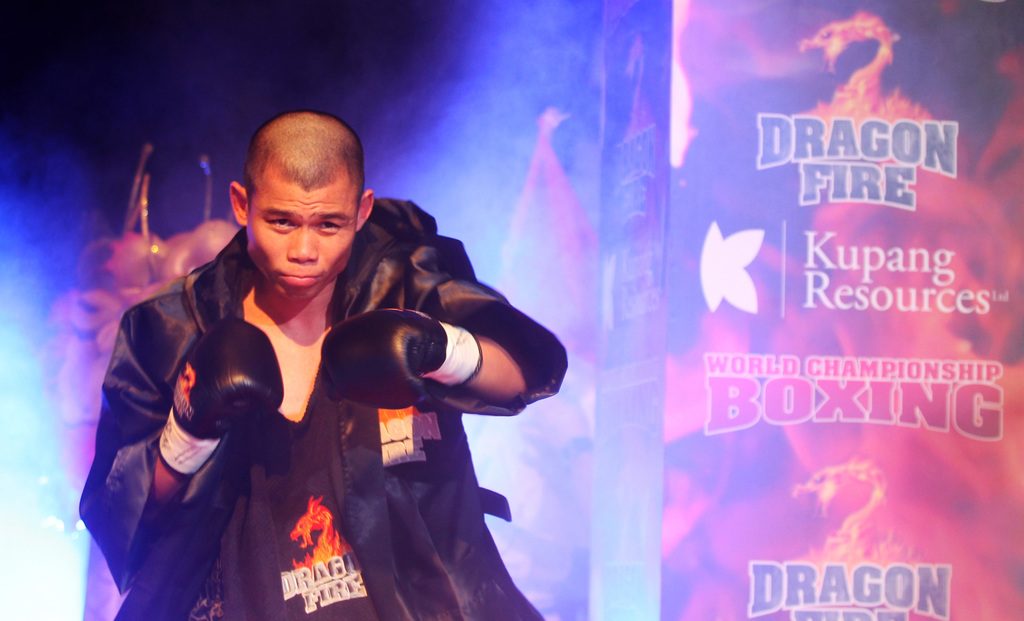 John went on to claim a regional 126-pound title before zeroing in on a world championship fight.

When WBA titleholder Derrick Gainer was injured and unable to defend his belt, John was matched with the seasoned Oscar Leon for the interim belt. In September 2003, “The Indonesian Thin Man’ edged the bout by close split decision.

John was soon upgraded to full titleholder and turned back the challenges of Gainer (UD 12), Juan Manuel Marquez (UD 12), Rocky Juarez (D 12 and UD 12) and he also prevailed in the first all-Indonesian world title bout against Daud Yordan (UD 12).

Despite travelling to the U.S. for both Juarez fights, much of John’s career took place in Asia. The money was better at home and he was hugely popular – over 50 percent of Indonesian people watched his fights – so there was very little motivation to travel.

On Dec. 6, 2013, the morning of Nelson Mandela’s passing, father time caught up with “The Dragon” (The Dragon in Chinese culture brings luck; John is of Chinese descent). He lost his title by sixth-round stoppage to South Africa Simpiwe Vetyeka and retired soon after with a record of 48-1-3 (22 knockouts).

Looking back, John feels his best two performances were the notable victories over Marquez and Yordan.

“With Marquez, I was so proud to make my country proud because I beat one of the best boxers in the world,” said the former titleholder. “Not many people gave me a chance to win this one, but all my preparation at Harry’s Gym made this possible.

“With Yordan, I could show to Indonesian boxing fans that I could beat their rising star and a younger boxer than me. Age doesn’t matter but experience does.”

Harry’s Gym and Dragon Fire Chief Operating Officer Tony Tolj has known John since 2004 and speaks glowingly of his friend and former fighter.

“Chris John is without question the most humble boxer I have ever been involved with,” said Tolj. “He lived his life by his ‘three Ds’: dedication, discipline and determination. His father instilled these values in him and he advised his son.

“You can’t use the elevator to success, you have to take the stairs. An example of the character of the man; every year, for his birthday, he would go to orphanages and buy the kids food and presents; a true humanitarian. He was recognized multiple times by the Indonesian president’s over his 10-year title reign. It was a privilege to work together with the WBA Fighter of the Decade Chris John.”

One man John would like to have competed against was “The Baby Faced Assassin”.

“I really wish I could have fought [Marco Antonio] Barrera,” he said. “Marquez could beat him, so why couldn’t I? He retired before I challenged him.”

John, now 39, lives in Semaranag with his wife and two daughters. He is involved in boxing as a promoter, runs his own property business, has appeared on television and does motivational speaking.

The ex-champion graciously took time to speak to The Ring about the best he faced in 10 key categories.

BEST DEFENSE
Soleh Sundava: He let me punch and expected me to tire. He had a good plan, but it didn’t work because I was younger and I had more stamina. The best defense was Sundava, even compared to Marquez or Gainer. His defense was neat and tight; very hard to punch his chin or stomach, so I punched his shoulders and anything I could.

FASTEST HANDS
Derrick Gainer: He was tall, skinny had a long reach and was very quick. Maybe because he is skinny and tall, that’s why he’s very fast.

BEST FOOTWORK
Marquez: He was a good counter puncher with foot movement. For example, when I landed the jab, he moved his foot back quickly and at the same time landed a strong straight shot.

SMARTEST
Simpiwe Vetyeka: He could read my mind. When I threw the jab, he just punched back straight away, and with more combinations too.

STRONGEST
Hiroyuki Enoki: He was very strong; never gave up even though I punched him a lot. He just kept coming forward, even though his face was swollen. He seemed like he didn’t care. He knew he would lose, from the first round to the end I was ahead of him, but he would not surrender.

BEST CHIN
Thongchai Treeviset: I punched him right on his chin so many times but magically he still stood up. To be honest with you, if any other boxer got punched that much on the chin, they would get knocked out. Finally, the referee stopped the fight because I punched him so many times and he couldn’t punch me back.

BEST PUNCHER
Marquez: His punch was powerful and accurate.

BEST BOXING SKILLS
Marquez: He was a smart boxer. He had good technique, skills and a powerful punch. No wonder he could beat good boxers such as Manny Pacquiao.

BEST OVERALL
Marquez: He had good footwork, good counterpunches. They were hard, strong punches and very accurate too. I am really proud that I could beat him.