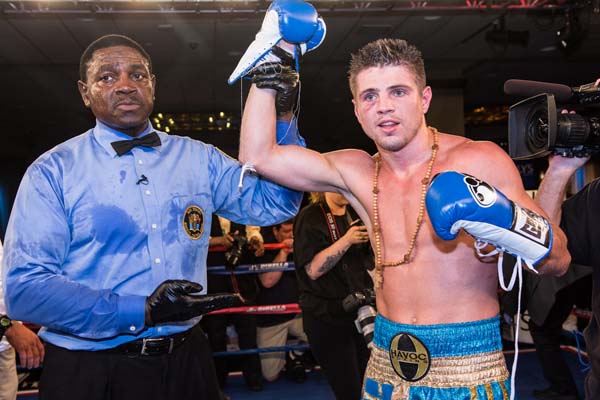 Super middleweight Ievgen Khytrov battered Gabriel Pham before stopping him in six rounds on Thursday night at the Convention Center in Monroeville, Pennsylvania.

The Brooklyn-based Ukrainian walked his southpaw opponent down from the opening bell, landing thudding shots to head and body that eventually took their toll. Pham attempted to fight back, but his punch output dropped with each passing round.

Khytrov’s aggression was decisive in Round 6 when, midway through that session, he landed a left hook to the body that dropped his opponent. Pham beat the count but retreated, which only served to give his opponent momentum. Moments later, Khytrov dropped Pham again with another left hook to the body, this time to one knee against the ropes. Pham rose again but went down a third time, courtesy of yet another left hand to the body. Referee Gary Rosato stopped the bout at 2:38.

This was Khytrov’s first fight at 168 pounds after mostly campaigning at the middleweight limit. The 30-year-old boxer-puncher recently appeared on The Contender series, where he was eliminated by eventual winner and recent world title challenger Brandon Adams.

In the co-feature, junior middleweight Eric Walker (19-2, 9 KOs) stopped Jose Antonio Abreu (14-6, 8 KOs) of the Dominican Republic in the fourth round.

The bout was stopped at 1:28 after Abreu reportedly was not able to continue due to an injury to his shoulder.

The 36-year-old Walker, who resides in Plaquemine, Louisiana, also participated in The Contender series. He made his pro debut at the age of 30 after serving several years in prison for armed robbery. It was in the penitentiary where he learned to box, fighting 66 times as an amateur and losing only once.

The fight card was streamed live on UFC Fight Pass.