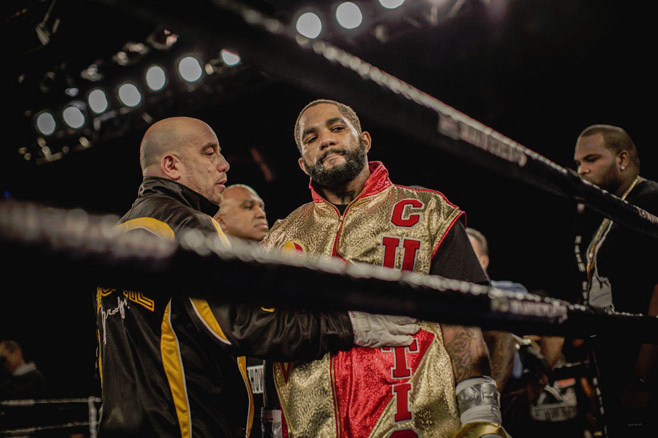 Curtis Stevens began his career as a light heavyweight, and now looks to end it as a junior middleweight. Photo by Sylwek Wosko
30
Jul
by Ryan Songalia

While most fighters generally move up in weight as their careers progress, Curtis Stevens has done the inverse. Having turned pro in 2004 as a light heavyweight, the former Chin Checker has worked his way down the scales throughout recent years. Now at 34, Stevens returns to the ring this Saturday at Barclays Center in his home borough of Brooklyn against Wale Omotoso, this time as a junior middleweight.

Standing at 5’7”, Stevens always seemed better suited for a smaller division. The lowest he had gotten was 157 1/2 for his 2016 win over James De la Rosa.

“I wasn’t trying to come in that low. I always knew I could have made it but I had nothing saying to me let me ‘move down to 154,’” said the “Chin Checker” Stevens, who was last in the ring a year ago against Carlos Rafael Cruz.

Stevens had been working with his trainer/uncle Andre Rozier as an assistant trainer when the itch to return to the ring hit him, but Rozier had some ground rules to set.

“No one has seen the best of Curtis Stevens due to the fact that he likes a little too much after the evening life,” said Rozier, who has worked with Stevens since he was 5 years old. “So we laid down the mandate that he had to be a practitioner of the sport and he’s worked really hard and he looks great.”

For the first time in over a decade, Stevens has management behind him, having linked up with adviser Keith Connolly, who manages Danny Jacobs and Adam Kownacki, the undefeated Polish fighter who faces Chris Arreola in the main event of the PBC on Fox card.

Stevens-Omotoso was elevated from the undercard to the opening bout on Fox on Monday after Andre Berto withdrew from his fight with an injury.

Omotoso (27-4, 21 KOs), a Nigeria native now based in California, is also 34 and had been a career welterweight before moving to 154 pounds in his last two fights. Despite his losses, Omotoso has never been knocked out, a fact that Stevens is hoping to change.

“I have tremendous punching power, so we’ll just see if he can hold up to it.”

Rozier says the fight will be contested for the WBO Intercontinental belt, and that the winner will likely earn the no. 5 ranking with the sanctioning body, putting Stevens in position to challenge WBO titleholder Jaime Munguia.

“We told him this is it, this is your last run, we’re gonna make it solid and a good one,” said Rozier. “He’s on a hot course looking for some Munguia meat and we’re gonna work and work until we’re close enough for him to get it.”

“I don’t have a time schedule,” added Stevens. “The way boxing is, you can never predict what will happen next. I can go in there and give Wale his first knockout loss. You never know how the ball turns. I could be fighting for a world title in my next fight. Whatever’s in God’s plans, I just gotta be ready for it.”

Stevens’ career has been an up and down journey over the past 15 years, with his punching power captivating audiences in the New York area. His shortcomings have come when a world title was in arm’s reach, including a 2013 stoppage loss to Gennady Golovkin in his only title opportunity. Yet just when his career seems to be winding down, he’s shown he’s always one left hook away from grabbing people’s attentions.

His most exciting knockout, he says, was his 2016 stoppage of Eric Howard on the Cotto-Malignaggi undercard at Madison Square Garden with 45 seconds remaining in the sixth and final round. The urgency was that there was a helicopter waiting on the building’s roof waiting to take him and his crew to the Bernard Hopkins-Antonio Tarver fight in Atlantic City.

“They were like Curtis go on and knock him out so we can catch B-Hop-Tarver. I’m like OK, but this guy wouldn’t go nowhere. He was a big country motherf—ker,” said Stevens. “I finally knocked him out in the sixth round and we caught the fight.”

His last fight in the Dominican Republic was thrilling, but for another reason. After the local fighter Cruz was beaten until he retired on his stool after the fourth round, a riot broke out, with the crowd tossing white lawn chairs into the ring. A bottle struck him in the head and armed police had to escort him and his parents to safety, but otherwise the mayhem didn’t ruffle his feathers too much.

“It actually started inside the ring. After [referee] Steve Smoger stopped the fight, his brother was cursing Steve Smoger out. I’m like ‘yo chill’ but he acted like he wanted to get in the ring and come for Steve, and I’m like ‘come on motherf–ker’ and from then it just got nasty,” Stevens recalls.

“I’m from Brownsville, it was more of, they were pissed off that their hometown guy got knocked out. I can understand, there’s no real rules and regulations over there. If that was Brownsville with no rules or regulations, same shit probably would have happened but with gunshots inside of the place instead of outside.”

Stevens isn’t planning for that much drama on Saturday night.

“What I always do, get in and get out,” said Stevens of his plans. “And become junior middleweight world champion.”