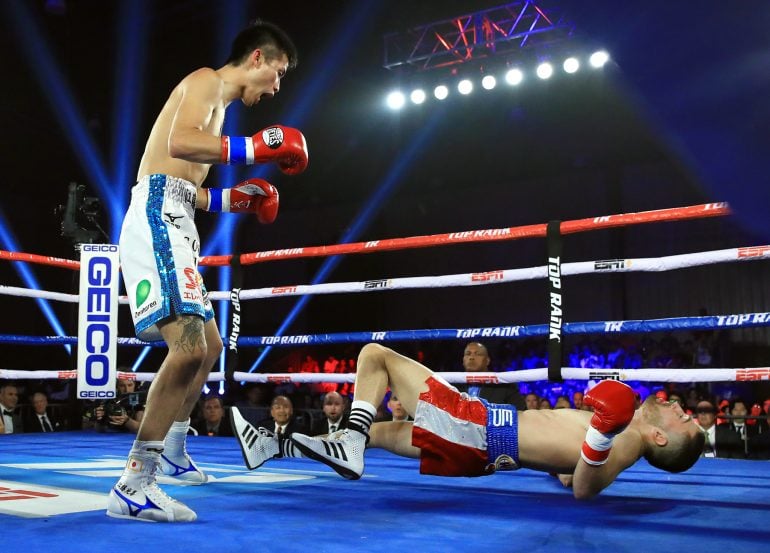 The story begins in late-May when Puerto Rico’s Jeyvier Cintron and Japan’s Koki Eto are matched in a WBO junior bantamweight title eliminator.

Late in the opening round, Eto and Cintron clashed heads and the latter was left sprawled on the canvas. Eto was initially declared the victor, but video replays confirmed an accidental clash and the result was amended to a no-contest.

This unfortunate scenario left a bitter taste in the mouths of all concerned, and both parties agreed to a direct rematch. The sequel takes place this Friday at the Osceola Heritage Park in Kissimmee, Florida and the winner will be named mandatory challenger for reigning WBO 115-pound titleholder Kazuto Ioka.

Cintron (10-0, 5 knockouts) is pleased to have the opportunity to face Eto again so quickly.

“Obviously I wanted it since the first (fight); I was 100 percent confident in myself,” Cintron told The Ring through Aleudi Rosario. “I believed in myself and everyone saw what happened; the headbutt. I could not take the victory on that occasion, and I longed for this fight. I’m going to show that I can (leave the ring) with my hands up.”

“I learned a lot; especially that I have to take care of myself. [Eto] is a fighter who enters with the head and you have to be alert; always keep your guard up. I have to use all my arsenal and be aware of the blows and headbutts.”

The battle-hardened Eto has been a professional for over a decade and held the WBA interim flyweight title in 2013. Prior to the Cintron bout, the 31-year-old Tokyo resident was on a seven-fight win streak after losing a spirited contest to then-WBC titleholder Carlos Cuadras in 2015.

Cintron had a week off after the Cintron bout before returning to the gym. He admits there was some mental residue left over from the first Eto fight.

“We worked hard in the gym, but we had to come up with a clean mind psychologically,” said the 24-year-old amateur standout.

Peter Rivera of PR Best Boxing felt that this rematch was a natural.

“It was something that had to happen because of the outcome of the first bout,” Rivera said. “We managed to make the rematch concrete, and we are confident that Jeyvier can achieve the victory and go for the world title later.”