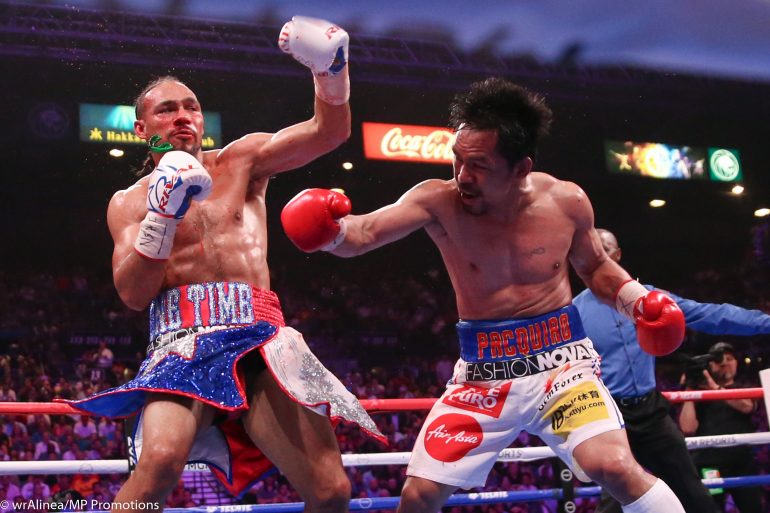 Sean Gibbons has been involved with sports in various capacities for 34 years, from his time as a pro fighter, to managing, to matchmaking. Still, no experience comes as close to the grand victory Manny Pacquiao pulled off this past Saturday in Las Vegas, handing Keith Thurman his first defeat at age 40.

“The second would have to be Carlos Baldomir beating Zab Judah, a couple of [Orlando] Salido fights, but nothing compares to Senator Pacquiao doing what he did at 40 years old,” said Gibbons, a Swiss army knife of boxing who works as a matchmaker for MP Promotions.

The only thing rankling him has been the insinuations – some veiled and others direct – about the integrity of the drug testing for this fight. Unlike at least four of Pacquiao’s previous fights, the Nevada-based Voluntary Anti-Doping Agency (VADA) did not conduct the testing for the Pacquiao-Thurman fight. Instead, pre-fight drug testing was conducted by the Nevada State Athletic Commission (NSAC).

Gibbons says VADA did the collection for NSAC, but did not administer the tests themselves. He adds that Pacquiao was tested “two to three” times prior to the fight. Then again on fight night, once before and once after, but did not recall at which points in camp that testing began.

“I want to tell everybody that questions the senator’s drug testing … you all live in Lala land. His performance enhancing stuff is called hard work, The Lord, faith and food. That’s it, that’s what he uses,” said Gibbons.

“There ain’t no hyperbaric chambers, there’s no two strength and conditioning [coaches]. It’s all old-school boxing. The man gets up and runs 7-8 miles uphill. He goes to the gym with Freddie [Roach] and Buboy [Fernandez] and works like a champ. Justin [Fortune] gets in there and throws in his plyometrics. [He] goes home and eats beautiful Filipino food, the best food prepared for him that you can ever have. Then, he mixes in six different vitamins and some honey.

NSAC, when reached for comment about its testing for the fight, said that it conducts “random drug testing on all fighters including urine and blood, both in and out of competition, to maintain the world’s highest standards for contests of unarmed combat … in a manner that accurately reflects the status of a fighter before, during, and after a contest.

“The Commission does not provide public comment on an individual’s testing schedule in order to protect the integrity of the program.”

VADA directed questions towards NSAC regarding Pacquiao-Thurman testing in a direct message, and did not respond when asked if they were the collection agency for the Pacquiao samples.

Gibbons points out that Pacquiao is enrolled in the WBC’s “Clean Boxing Program,” which is partnered with VADA, and that he’s available throughout the year, in or out of training to be tested, even when he’s at home in the Philippines working as a senator.

“They can drop any test that they want. Why don’t they come? Because they don’t want to pay for it. It’s a money thing,” said Gibbons. “So when someone says he’s not with VADA, that’s bulls—. He’s with VADA 365 days a year.”

Gibbons says it’s unlikely that Pacquiao will fight a third time in the calendar year of 2019, and is likely to return to the ring in the first quarter of 2020. Asked for opponents Pacquiao’s side would be interested in, Gibbons listed Danny Garcia, Mikey Garcia, or WBC titleholder Shawn Porter. When asked about IBF welterweight titleholder Errol Spence Jr., who is set to face Porter on September 28, Gibbons says Pacquiao has nothing left to prove in the sport after winning world titles in eight divisions, including four different reigns at 147 pounds.

“This isn’t Manny Pacquiao at 30. He beat the best of his time. He beat the Errol Spences and [Terence] Crawfords of his era. He beat [Erik] Morales, [Marco Antonio] Barrera. This is just cruising out some fights that are great for the fans. I don’t see any fans demanding the Errol Spence fight. I see a couple of reporters asking about it, but where’s the demand?” Gibbons asked.

“Beating Keith Thurman is as good as beating Errol Spence. It’s as big on a magnitude. Keith Thurman two years ago was the unified champion. He was better than Spence, better than Porter. They weren’t even talking about Spence.” 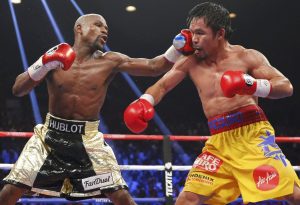 Gibbons brushed aside the symbolism of Floyd Mayweather Jr. appearing in the ring before the fight, but not confronting Pacquiao after his victory. Mayweather defeated Pacquiao in their overdue showdown back in 2015 in a fight that set pay-per-view and financial records.

“Mayweather has said he is retired, the senator is a very active guy. If Mayweather decided he saw something and wanted to fight again, the senator is available, but those are really questions for Floyd. Of course, we’re not gonna ever turn it down.

“The idea is there was some closure that Manny would like. He had some issues with his shoulder. He’d love another shot just for his legacy, but at 62-7-2, his legacy is better than any 50-0 ever.”