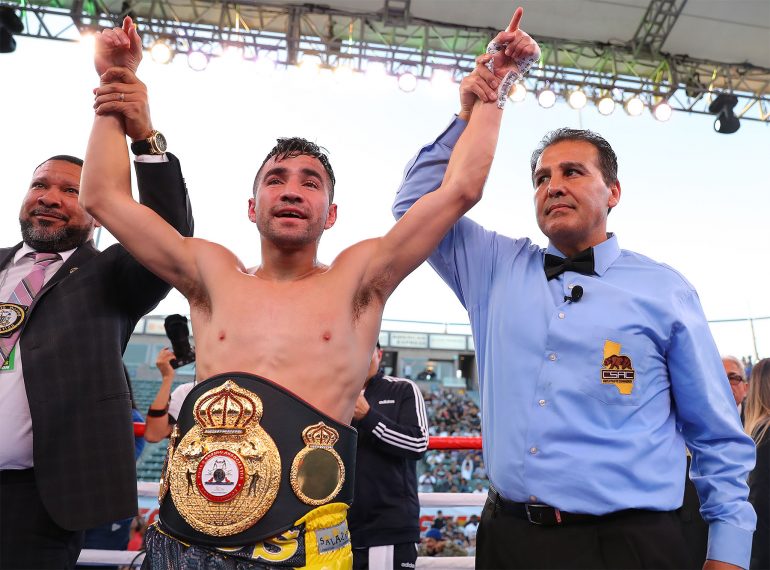 CARSON, California – Ronny Rios was in semi-retirement after his knockout loss to Azat Hovhannisyan on Mar. 9 of last year. Rather than hang up the gloves for good, Rios decided to give his career one more go-around.

After his upset win Saturday night, he is glad he did.

Rios gave Diego De La Hoya the first loss of his career, dropping him in round six to win by knockout to improve to 31-3, 15 knockouts. With the win, he won two regional title belts.

The fight between Rios and De La Hoya was a clash between junior featherweight contenders who had issues outside the ring. It was almost 14 months before Rios returned to the ring after the Hovhannisyan fight, stopping Daniel Ole after the fifth round on Apr. 26.

De La Hoya was scheduled to fight in his hometown of Mexicali, Mexico for the first time as a pro on Nov. 17, but he had to withdraw two days before the bout after reportedly collapsing in an attempt to make weight. He returned to the ring against veteran Enrique Bernache on Apr. 13, fighting to a No Contest in round two after a cut opened over the right eye of Bernache from an accidental clash of heads that deemed him unfit to continue.

After a dull opening round, both fighters let their hands go in round two to the delight of the fans in attendance at Dignity Health Sports Park (formerly known as the StubHub Center).

Both fighters traded two-three fight combinations during entertaining exchanges. De La Hoya would land several sweeping right crosses to the head, while Rios effectively countered with left hooks, producing a trickle of blood from the nose of De La Hoya.

The pace of the fight slowed in round four, but both fighters went at during the last 30 seconds of round five, bringing fans out of their seats after their back-and-forth exchanges. 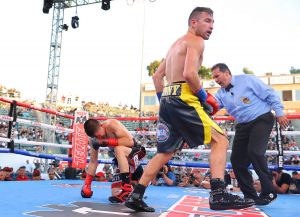 Midway through the sixth round, Rios landed a left hook to the body, followed by a right uppercut to the head, dropping De La Hoya to the canvas. De La Hoya beat the count, said something to referee Rudy Barragan, who waved the fight off at 1:17.

Rios, who resides in nearby Santa Ana, was emotional after the end of the fight, embracing trainer Hector Lopez.

“I feel great. It’s an unbelievable feeling,” said the 29-year-old Rios. “I was mentally focused for this fight. I think I overthought in those other fights.”

“I was kind of retired. I was inspired to come back to the ring. I believed in myself. I still have a lot more years. I pushed my team. De La Hoya pushed me because he was likely training harder than me. (The knockdown) was a shock. He’s a warrior. He had never been knocked down before and he just kept coming forward.”