Jazza Dickens wins ten round decision over Nathaniel May in Liverpool 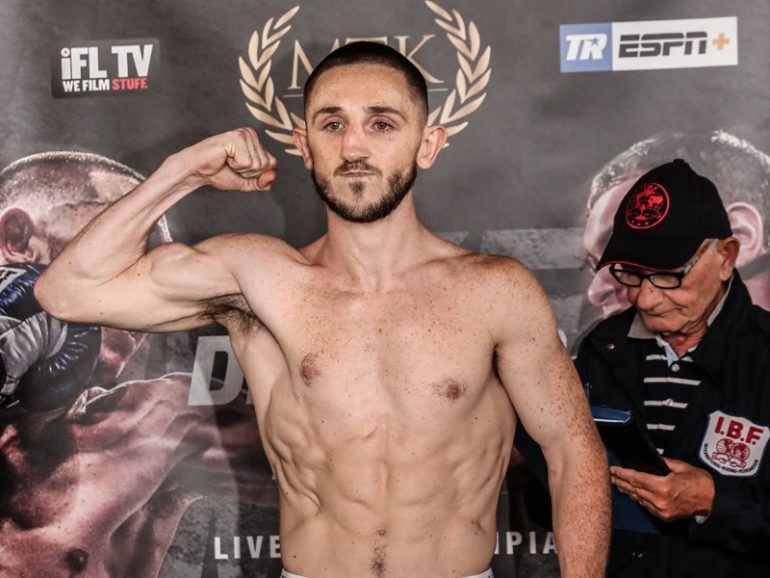 Jazza Dickens thrilled his hometown fans in Liverpool at the iconic Olympia with a ten round unanimous decision over Nathaniel May at featherweight. The scores were 97-92, 97-91 and 96-92.

Both men fought on even terms for the first three minutes. May surprised Dickens in the second and landed several impressive shots and certainly got the Liverpudlian’s attention. It served as the wake up call he needed, Dickens enjoyed a better third round and kicked on dropping the Australian in the fourth and again in the fifth to stamp his authority on the contest.

Dickens, who had held the British title at 122-pounds and had unsuccessfully challenged Guillermo Rigondeaux for the WBA strap in 2016, looked at one point like he may stop May but to the Australians credit he dug in but was unable to reverse his fortunes and lost a decision.

Dickens improves to 27-3 (11 knockouts) with his fifth straight win while May (21-2, 12 KOs) suffers his first loss since his fifth pro bout.

Terry Flanagan (34-2, 14 KOs) got back in the win column on his return to lightweight, dropping Jonas Segu (19-9-2, 6 KOs) in the final 30 seconds of the first round with a check hook. Although the Tanzanian battler was on unsteady legs he was able to survive to the end of the round.

“Turbo” Terry struggled at times to catch his unorthodox opponent for the next two rounds but importantly was able to shed some much needed ring rust before he found his feet before the stoppage came in the fifth round.

Amateur starlet Natasha Jonas (8-1, 6 KOs) thrilled her fans with a fourth round stoppage over Bec Connolly (2-6, 0 KOs). Jonas dropped Connolly twice early in the opening round but to Connolly credit she dug in and lasted until the fourth when she was hurt and rescued by referee Steve Gray.

Craig Glover outclassed Czech republic journeyman Jiri Svacina over six rounds in a cruiserweight bout. The Tony Bellew protege got back to winning ways and moved his record to (10-2, 8 KOs), while Svacina dipped to (13-36, 2 KOs).