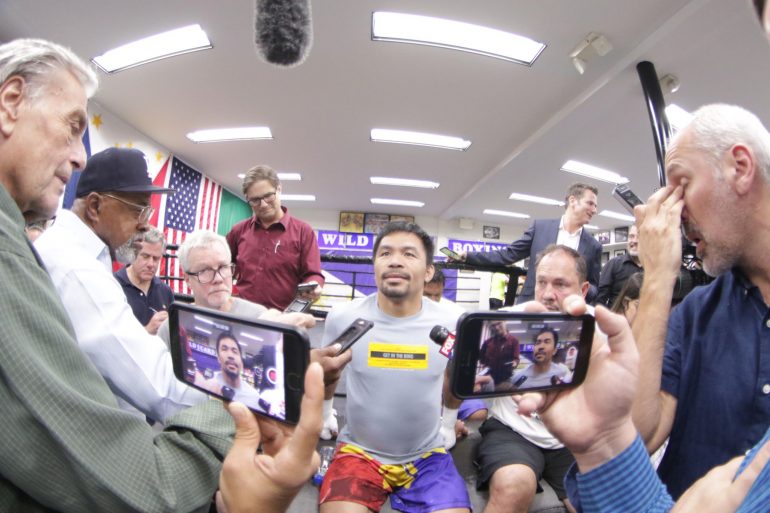 Thursday brought us a conference call to hype the July 20 Manny Pacquiao fight, which pits the 40-year-old fighting senator against younger gun Keith Thurman, a cerebral Floridian who looked only so-so in his most recent outing.

The dominant theme of the call, presided over by long time “Pacman” publicist Fred Sternburg, played out as follows: I’m 40. I feel really good. I know I can’t over-train anymore and I do this because I love exercise and I love the challenge.

“Why do this?” Rafael asked. “Because I love to exercise,” the boxer responded. Trainer Freddie Roach said he thinks Manny will keep on fighting because – Why not? His speed is still exemplary, and he thinks Pacman wants to snag another world title.

Basically his boxing aims have been satisfied, Pacquiao continued, but he still loves this grind.

Attempts to lure Pacman into a spicy sound bite failed. No, he said, he hasn’t been offended by Thurman’s trash talk, such as when the latter said he’d like to “crucify” the heavy-duty Christian. “I’m not angry with him,” said the placid pugilist. He did allow, however, that Thurman’s comments have jazzed him up more so than anyone else has of late and that will show in aggressiveness during the bout, which will unfold in Las Vegas. “Been a long time, I’ve never (been) focused like this,” he added.

“Dedham” Freddie was asked if he was using reverse psychology, in NOT declaring that Pacquiao would win by KO, as he always does before these fights. He chuckled and said no, not using any psychological tricks. However he stated later that he does think Adrien Broner is a better fighter than Thurman and that Manny’s speed will shock and amaze the younger fighter.

Manny also didn’t really bite when asked if he’d retire if he lost. He said his body and mind are good; he wants to fight on.

He held the door open for another fight this year, during the next legislative break in the Philippines. He does indeed keep in touch with staff there and monitor bills and such, while training, he disclosed.

The hitter said again that he compares Thurman’s style to that of Ricky Hatton but didn’t delve deeply into how.

We did get a candid bit when he admitted he was over-trained for Jeff Horn and that he’s now pulled back. Buboy Fernandez and Justin Fortune monitor him for overworking, he told media.

We heard Manny refer to being careful in the ring a few times. Yes, he did learn from being the hyper-aggressor, against Juan Manuel Marquez; I think.

Writer John Gatling told Pacquiao that he’d been in Florida on Wednesday and that Thurman (29-0, 22 KOs) had told him he’d go right at Manny. Pacman seemed happy to hear that and believes that would be to his advantage. That would be a “gift,” Sternburg cracked. Roach, meanwhile, indicated he’d believe that when he saw it.

Pacquiao’s last query had him saying yes, he’d like to do a fight in the Philippines.

My three cents: Not much in the way of news but a few thoughts: One, the promotion of this clash has been consistent and solid. Sternburg gets a lot of credit for that. Two, I’m hopeful we get a good style clash, that Thurman fights like he told Gatling he would. We need him to be aggressive, attack…If he’s “Moving Time” Thurman, this one could leave pay-per-view buyers bummed. Pacquiao is a smarter, not harder, fighter now. His volume level won’t be what it used to be and it will be up to Thurman to make sure tens of seconds don’t go by with little flurrying.

What are your thoughts, a bit more than a week away from Thurman vs. Pacquiao?