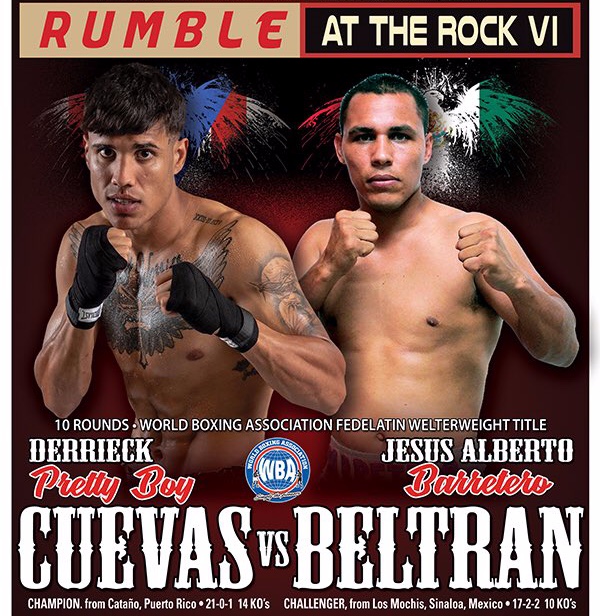 Derrick Cuevas is on the cusp of becoming a world title contender at 147 pounds. A victory over an experienced fighter from a boxing family could make that a reality.

Cuevas will face Jesus Beltran Friday night at the Seminole Hard Rock Hotel and Casino in Hollywood, Florida. The 10-round bout will air live on Telemundo (11:35 p.m. ET/ PT).

Friday’s telecast will commence the ’Boxeo Telemundo’ summer series. The fight between Cuevas and Beltran will also mark another chapter in the Puerto Rico-Mexico rivalry.

The 24-year-old Cuevas has passed every test thus far, earning a modest No. 13 ranking by the WBA. Cuevas will have a significant test when he faces Beltran, who will also be making his United States debut Friday night.

Beltran (17-2-2, 10 KOs), who resides in the boxing hotbed of Los Mochis, Mexico, has not fought since losing a close split-decision to unbeaten junior middleweight prospect Oluwafemi Oyeleye. The 31-year-old Beltran is the older brother of former world featherweight title challenger Miguel Beltran.

Promoter Felix ‘Tuto’ Zabala believes the aggressive style of Cuevas and the ring savviness of Beltran could produce an action fight.

“Cuevas is a young Puerto Rican who is undefeated with a lot of hunger (to succeed),” Zabala told RingTV Tuesday night. “Beltran comes from a boxing family and he wants to solidify his standing in the sport. I think their styles will provide for a great fight.”

A regional title belt and a top-10 ranking will be on the line for both fighters.

In the co-feature, welterweight prospect Livan Navarro will square off against Diego Cruz in an eight-round bout.

Navarro (11-0, 7 KOs), who is originally from Cuba and now resides in Miami, Florida, defeated Breidis Prescott by unanimous decision in his last bout on May 10. Cruz (19-7-2, 15 KOs) resides in Mexico City and has lost four of his last five bouts.

Francisco A. Salazar has written for RingTV.com since October of 2013 and has covered boxing in Southern California and abroad since 2000. Francisco also covers boxing for the Ventura County (Calif.) Star newspaper, Boxingscene.com, and FightNights.com.