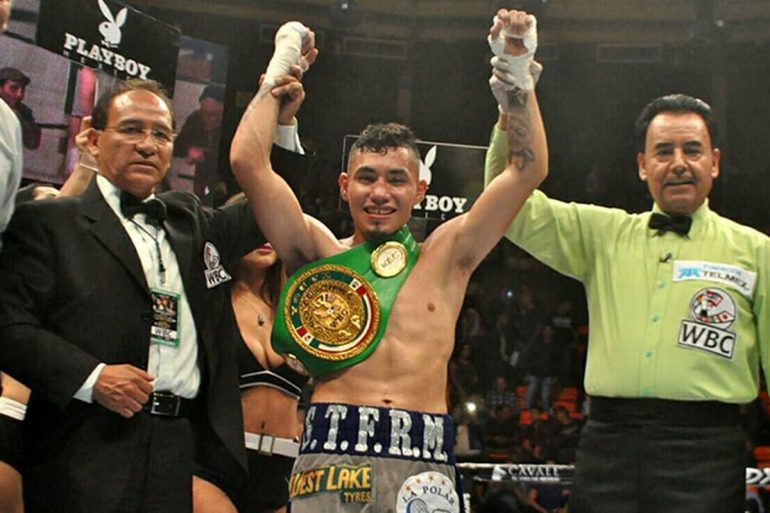 Nine out of 10 boxers from Mexico will tell you that Julio Cesar Chavez inspired them to pursue the sport. That 10th boxer will tell you it was another Mexican great, maybe Erik Morales or Marco Antonio Barrera, depending on where in Mexico he’s from.

Eduardo Hernandez, a 21-year-old junior lightweight contender, has many Mexican fistic idols to choose from being from Mexico City (including Barrera, Salvador Sanchez, Juan Manuel Marquez and Ricardo Lopez), but it was Sylvester Stallone who inspired him to first step into a boxing gym 11 years ago. 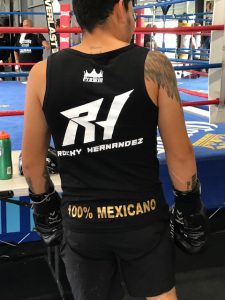 “It all started with me watching the Rocky movies with my dad, starting with Rocky Balboa, and then going back and watching the earlier films,” Hernandez told RingTV.com (with translation help of Nancy Rodriguez of the WBC) last week at Legendz Gym in Norwalk, California.

“My dad wasn’t that into the sport of boxing, he just really liked those movies, and I enjoyed watching them with him. At some point I started to wonder what it would be like to be a boxer, to punch somebody, to receive punches, to rely on my wits in the ring. I was a little chubby as a kid so my father thought it would be good for me to do boxing training to lose weight.”

Hernandez did more than lose weight. He found he had a knack for the sport, and the ferocious manner in which he tore into his gym mates and amateur opponents, earned him the nickname of his fictional hero, “Rocky.” Hernandez compiled a 112-8 amateur record and he’s won all 28 of his professional bouts (25 by KO).

On Saturday, he will fight in the U.S. for the second time, taking on Roger Gutierrez in the opening bout of a DAZN stream headlined by the Rey Vargas-Tomoki Kameda WBC 122-pound title bout on Saturday at the Dignity Health Sports Park (formerly StubHub Center) in Carson, California.

Gutierrez (23-3-1, 18 KOs), a former prospect who is coming off a fifth-round KO of Leonardo Padilla (17-1 at the time) in December, has a respectable record and is a solid opponent but he isn’t considered much of a threat to Hernandez, The Ring’s No. 9-rated junior lightweight.

The 24-year-old Venezuelan suffered his first loss to hardnosed Nicaraguan gatekeeper Rene Alvarado in 2017, getting stopped in the seventh round, and he’s since lost to Golden Boy prospects Hector Tanajara (UD 8) and Oscar Duarte (RTD 4) last year.

Hernandez isn’t looking past Gutierrez, but he’s isn’t overly concerned either. He’s been in with more accomplished fighters, including former 122-pound beltholder Viktor Terrazas, and he’s put the work in during a six-week camp with new trainer Manny Robles Jr., who encouraged him to leave Mexico City to train in Norwalk. Hernandez views Saturday’s fight as the second phase of a new learning process that began with his first training camp in the U.S.

“Coming to train in California with Manny was a decision I made with my Mexican promoter, Promociones del Pueblo,” said Hernandez, who is co-promoted by Golden Boy. “We wanted to elevate my camp, expose me to better fighters, different styles, in order to prepare me for international-level bouts. 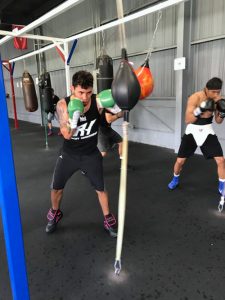 “I’d reached the top of the Mexico scene, so we were looking for top trainers in the U.S. We were considering Robles for awhile but after he trained Andy Ruiz to beat Anthony Joshua for the heavyweight championship, we were convinced he was the right choice.”

And training at Legendz Gym has also proved to be a good choice.

“I’ve learned so much in such a short period of time,” Hernandez said. “Training here, with Manny helping, has opened my eyes. I’ve got a lot more to learn.”

Robles agrees with his newest fighter.

“He’s definitely a hard puncher, his record proves it, he carries pop in both hands, but I believe he’s got a lot of room for growth,” said Robles, who, along with Andy Ruiz Jr., is currently training former heavyweight beltholder Charles Martin and junior featherweight prospect Francisco De Vaca.

“Rocky’s an aggressive-type of fighter, he’s got that Mexican style, but I’d like to work on his defense, his ring generalship and his footwork.

“There are different aspects of boxing that I’m trying to show him. I think he understands now that training in America is a little bit different than in Mexico. Out here, it’s a melting pot where you get boxers from every part of the world in your gym.” 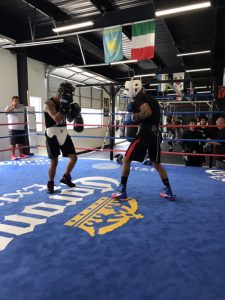 Crowley, a 25-year-old Londoner who was held to a draw in his pro debut in April, gave the stalking Hernandez some looks with his jab and lateral movement. Valdes (12-0, 7 KOs), 20, took a more aggressive approach, drawing Hernandez into a battle of infighting before Robles reminded the Mexican to gain some distance, work his jab and move his head.

“In America, he’s going to face a lot of different styles, guys that can box, guys that can fight you on the inside, southpaws, tall guys, fighters out here are more well-rounded than what he’s used to and we got to get him ready for that.

“His first couple of weeks here were difficult for him. He had to adapt. It’s not like in Mexico where most of the guys he sparred with and fought were one-dimensional. He was accustomed to having opponents stand in front of him. They may not do that over here. Guys will box when they need to and they’ll stand and trade when they need to.”

During the eight rounds with Crowley and Valdes, Hernandez showed the ability to adapt as he applied smart pressure. He’s added wrinkles to his game, says Robles.

“It was a little bit discouraging for him in the beginning, but he hung in there,” Robles said. “I told him ‘The more you’re here, the quicker you’ll get used to these different styles, these types of boxers.’

“He’s had five different sparring partners for this camp and they all have different styles. And when he’s in with these types of styles in a fight, he’ll be able to adapt to them a lot quicker than if he hadn’t experienced it in trainer.

“We talk one-on-one after every sparring session. I want to see if he feels he’s learning and improving. And he seems pretty happy. He wants to come back before his next fight. He says ‘Next time I’m coming back even sooner.’ That’s what I want to hear.”