Thulani Mbenge: ‘I have to adjust to Sebastian Formella’s movement, then it’s game over’ 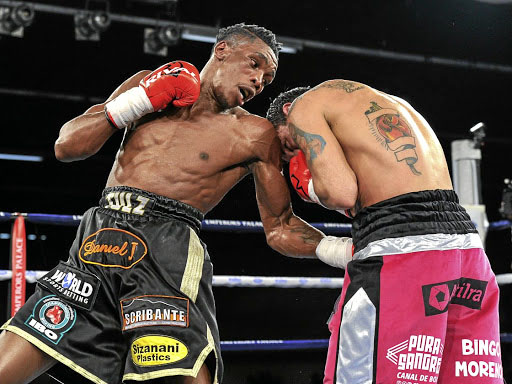 Thulani Mbenge digs a left uppercut to the body of Diego Chaves. Photo by nSquared
01
Jul
by Anson Wainwright

Mbenge (15-0, 12 knockouts) is coming off a banner year in which he moved from prospect to bonafide contender. The 27-year-old out-boxed the much heavier Diego Cruz and followed that with impressive stoppage wins over former world title challenger Diego Chaves and former lightweight titleholder Miguel Vazquez.

After taking some to relax, he is now ready to get back to what he does best against the unbeaten Formella.

“Sebastian is a good opponent for me,” Mbenge told The Ring. “He is a good mover, more than the last opponent I fought [Vazquez]. I have to adjust to the movement, then it’s game over.”

This will be Mbenge’s first fight outside South Africa but it won’t feel like it.

“It’s not a shocker because I have fought outside of South Africa as an amateur boxer,” he explained. “Germany is like my second home as I have a lot of friends, family and fans that support me there and I can’t wait for July 6.”

Mbenge feels that he has learned a lot from facing crafty veterans like Vazquez.

“It showed me that I am improving as a professional boxer and that fight took me to a different level,” he said.

His trainer, Sean Smith, believes his fighter has improved in the past year and feels he can make an impact at the highest level.

“[Mbenge has] grown and matured significantly,” said Smith. “I think a fighters mindset and goals start to evolve and he starts seeing the bigger picture of where he stands in the division and where he can go.

“His approach to training in general is from a more mature aspect with intense motivation. So with more fights and activity I am interested to see where he can go.”

Smith knows that his charge can ill afford to slip up and needs to continue getting the victories.

“If Thulani can execute a convincing win against Formella in Germany, it solidifies his position in the welterweight division and promotes him as a global threat to the top contenders,” Smith said. “I look forward to Thulani giving a convincing performance.”

Formella (20-0, KOs) turned professional in 2014. The now 32-year-old has moved steadily through the ranks in Germany, winning a handful of regional belts, and this bout marks a step up in class.