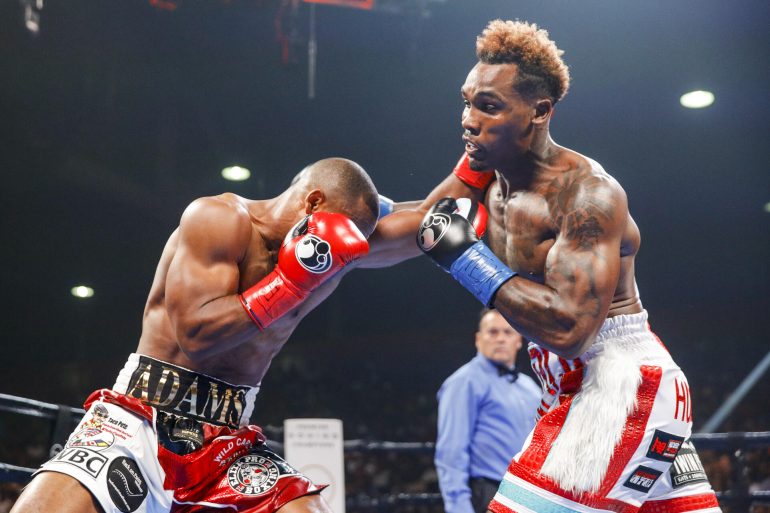 Jermall Charlo’s sanguine reaction might have been masked somewhat by not getting completely what he wanted Saturday night. Brandon Adams’ granite chin and courage may have had something to do with that.

Before he even threw a punch, Charlo already had the “interim” tag lifted and was openly declared by the WBC as its middleweight champion.

Charlo, the 29-year-old from Houston, Texas, intended to reward himself further with his fists before a hometown crowd of 6,408 at the NRG Arena with a knockout. An injured left hand derailed those plans on Showtime’s Championship Boxing, forcing Charlo to win by a convincing unanimous decision in his first title defense over the tough Adams.

“I worked for this,” Charlo said, holding up the WBC belt. “My hand will be all right. That’s part of boxing like I said. I hurt my (left) hand in like the second round, but I tried not to show it. I kept throwing it. It was obvious my jab wasn’t flowing like it was supposed to be.

“Look, I had a good night. It was fun. He had a chin. But this is a different level. I’m about to get back into the gym and back at it, baby.”

Judges Don Griffin and Steve Morrow both gave Charlo a shutout, both with 120-108 scores for Charlo, while judge David Sutherland gave Adams one round in his 119-109 tally.

From the outset, it was clear Charlo (29-0, 21 knockouts) was the far bigger fighter, though, according to Showtime scales the day of the fight, not the heavier fighter. Adams (21-3, 13 KOs) came in at 174 on fight night, two pounds heavier than Charlo.

In the opening rounds, Charlo had the better of Adams, though “The Cannon” did manage to get inside of Charlo’s range in the third, able to work off of Charlo’s chest. Still, Adams wasn’t able to do any respect-generating punches.

In the fourth, Adams did more damage with his head, leaning in and banging into Charlo.

With 1:11 left in the fifth, a stiff Charlo jab on the chin caught Adams by surprise and staggered him. Charlo jumped on him in the corner with roughly a minute left in the round, though Adams was able to escape without absorbing any more harm. 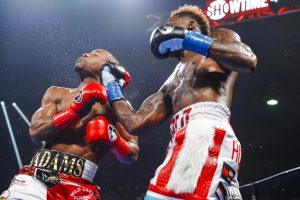 Charlo’s right uppercut jolted Adams more than a few times during the course of 12 rounds. Photo by Esther Lin/Showtime.

In the last :30 of the sixth, Adams caught Charlo with a heavy left to the face. An Adams’ looping left hook also caught Charlo’s attention. It was arguably the first—and only—round Adams won.

After the sixth, Ronnie Shields, Charlo’s trainer, stressed to Charlo between rounds that he was “trying too hard” to knock Adams out. Those Charlo chances created openings for Adams to counter Charlo attacks.

Charlo regained his composure in the seventh.

That caused Freddie Roach, Adams’ trainer, to stress that he “was giving too many rounds away.” Adams admitted it was true.

Adams was able sneak in a left hook to the cheek in the opening minute of the eighth, however, Charlo walked right through it.

In the 10th, Charlo, well ahead on the scorecards and very in command, had Adams some trouble with 1:12 left in the round, beginning with a right uppercut. Adams appeared somewhat rattled, looking down on the canvas, as if trying to find where he was.

But Charlo couldn’t finish him.

Adams, 29, deserves respect for his chin and amount of punishment he took. It’s the first time Adams went 12 rounds.

“I hoping to take everything he brings to the table,” Adams said. “He did what he was supposed to do. He’s a champion for a reason. I take my hat off to him. He’s the much bigger guy—period. I won’t sit right here and tell no stories, but I had to put my best foot forward and try for that Joe Frazier, Evander Holyfield style and try to take him out.

“He started boxing. When I started coming on, he started moving.”

Adams expressed an idea of going back down to 154 pounds.

“I feel like I just came ready,” Lubin said. “I was just a few steps ahead from the beginning bell. I knew I was going to come out here and dominate. After a few shots he looked hurt. I was going to keep teeing off until he was down or out.

“(Trainer Kevin Cunningham) has helped me a lot. He’s helped me keep focus. He took training to a new level with strength and conditioning. He’s a southpaw specialist.

“I don’t think it (the Jermell Charlo fight) was too soon there was a bit of mishaps in camp. Respect to him. He has to fight Tony Harrison, J-Rock (Julian Williams) has to fight (Jarrett) Hurd. My next fight won’t be for a world title but I definitely want to get in there with a top-10 kind of guy. I just want to prove that I’m one of the top dudes.” 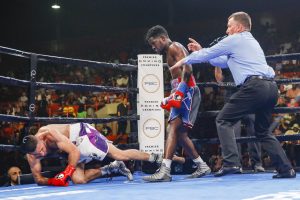 Attou claimed he hurt his right arm in the third round.

“I was injured in the third round,” Attou said. “I couldn’t use my right arm. I’m heartbroken about the injury. My strategy was to start picking up the pressure after the sixth round. I know that Lubin has never been 12 rounds before, so our plan was to come on in the late rounds and take him out.”

“My strategy was to pressure him all night and break him down,” Marrero said. “I knew that I was fighting basically in his hometown so I had to take the fight to him. He was an awkward fighter. That was hard to solve but I thought I did a good job as the fight went on. I could feel that he was weak in the body so I attacked there and did it well.

“I’m ready for anybody. I always step to the plate and fight who’s in front of me. Bring them on. Leo Santa Cruz could definitely get this action next.”

Ramirez was still in denial after the fight.

“I thought that I did enough to win the fight,” Ramirez said. “I disagreed with the judges. I thought it was close but that I won. I dominated enough of the fight to earn it. I went forward with my typical Mexican style and attacked all night. I wanted to target the body and I thought I did that well.

“There’s nothing I can do about what the judges decided, but I want the rematch with Claudio Marrero, that’s my goal.”

In a WBC super welterweight title eliminator, Erickson “The Hammer” Lubin (21-1, 16 KOs) scored a fourth round TKO over Zakaria Attou (29-7-3, 7 KOs) on Saturday night at NRG Arena in Houston, Texas. Lubin dropped Attou in round four and Attou’s corner threw in the towel. Time was 1:19. Attou suffered a bicep injury in round three.