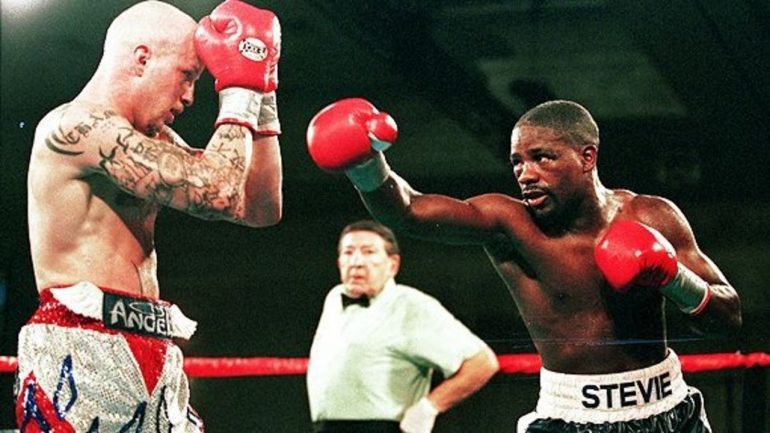 Stevie Johnston (right) on the offense against Angel Manfredy.
24
Jun
by Anson Wainwright

Lightweight stalwart Stevie Johnston twice held the WBC 135-pound title in the late 1990s. He was respected rather than admired for his slick boxing skills.

Johnston was born in Denver, Colorado on September 28, 1972. He lived with his mother and younger sister and was the man of the house for much of his formative years, although he was also influenced by his grandparents.

He became interested in boxing when he was eight years old.

“My uncles were fighters,” Johnston told The Ring. “My grandma used to babysit me when I was younger and she used to send me to the gym with my uncles. That’s who trained me and that’s how I got started.”

“Lil’ But Bad” didn’t look back and had a distinguished amateur career, winning several national titles, Internationally he won gold at the Pan Am games in Cuba in 1991.

Johnston attempted to represent his country at the 1992 Olympics but finished second in the trials behind Vernon Forrest. He finally exited the amateur scene with an impressive record of 260-13.

The diminutive Johnston turned professional in his hometown in February 1993 but immediately struggled to secure opponents. Desperate to keep his career from stalling, he stepped up to 140 pounds and bested future welterweight belt holder James Page in just his fifth pro fight. In his 12th outing, he would stop future junior welterweight titleholder Sharmba Mitchell in nine.

A couple wins later, having taken Corey Johnson’s unbeaten record, Johnston won the NABF 135-pound strap. He made three defenses of that title while working his way into the WBC mandatory position. The path to a title shot was tough.

In March 1997, Johnston traveled to Paris, France to take on reigning champion Jean-Baptiste Mendy. A close fight ensued, however, at the conclusion of 12-rounds, the American had edged matters by split decision in what he describes as his proudest moment in boxing.

“I thought I beat him pretty handily,” Johnston said. “I didn’t think it would be a split decision, I thought it was gonna be unanimous.”

Johnston was soon on the road again, defending his title in Japan against Hiroyuki Sakamoto. He then returned to America to post wide decision wins over Saul Duran and George Scott before being upset by Cesar Bazan in June 1998.

The two met in a rematch eight months later and a fired up Johnston regained his title by split decision. He was active in his second championship tenure, turning back the challenges of Aldo Rios [UD 12), Angel Manfredy [UD 12], Billy Schwer [UD 12] and Julio Alvarez [TKO 2].

In June 2000, Johnston faced the then-unknown Jose Luis Castillo in Los Angeles. The pair fought at close quarters throughout and Castillo claimed a close split decision in a bout that was named The Ring Magazine “Upset of The Year”.

Three months later the two met in a rematch and once again it was a close fight. At the end of 12 rounds, Johnston was declared the winner, but moments later it was revealed that the bout was a draw.

“Wasn’t meant to be that night, they called it a draw and the champ keeps the belt,” Johnston said with disappointment in his voice. “I thought I won. After the scorecards were totaled up they called me the winner and a few minutes later they say it was a draw.”

The always classy Johnston went to Castillo’s changing room and informed the Mexican of the error and returned the title to its owner: “What can you do? I just gave him back the belt [laughs].”

Johnston continued to fight but was stopped by Juan Lazcano in a world title eliminator in 2003. His prime had passed and years of fighting had taken its toll.

Looking back over his impressive career, there was one man he wished he could have fought.

“Me and Shane Mosley had a rivalry in the amateurs,” Johnston said. “When he had the IBF and I had the WBC belt, I wish we could have met. It would have been a good one, but it never happened. Floyd [Mayweather Jr.] came behind me [moving up to 135 pounds in April 2002].”

Johnston, now 46, still lives in Denver. He’s married, has five children and is no longer involved in boxing.

“Just living the retirement life, staying out of trouble,” said the former two-time titleholder of his life today. “I did good in boxing and I’m just enjoying life.”

Johnston graciously took time to speak to The Ring about the best he fought in 10 key categories.

BEST JAB
Cesar Bazan: He was so tall and lanky with his left jab and I couldn’t get in like I wanted to. I think he had the best jab of them all.

BEST DEFENSE
Jose Luis Castillo: In the second fight with Castillo, he trained really hard and was really hard to hit that fight. I give it to Castillo.

BEST HANDSPEED
Sharmba Mitchell: He was lefthanded and really fast. He was a good boxer.

BEST FOOTWORK
Mitchell: Probably Sharmba again. He knew how to work his feet really good being a lefthander.

STRONGEST
Castillo: Edner Cherry, mmm no, I take that back, Castillo was. The second fight with Castillo, he was in better shape, he came to keep his title. I thought I beat him but they robbed me and said it was a draw. He was really strong that fight.

BEST PUNCHER
Bazan: Castillo again, no wait, I take that back. The first fight with Bazan, he had a good left hook.

BEST CHIN
Edner Cherry: I give that to Cherry. I remember just hitting him and he just kept coming.

BEST BOXING SKILLS
Angel Manfredy: He was a good boxer. He had a good jab, he was a good counterpuncher, he was tough. I had to be on my game that night ’cause he was in shape and he was ready to take the title, but I was just a smidge better that night.

BEST OVERALL
Juan Lazcano: He was really tough. He was willing to take a shot to give a shot, he was on his game that night.