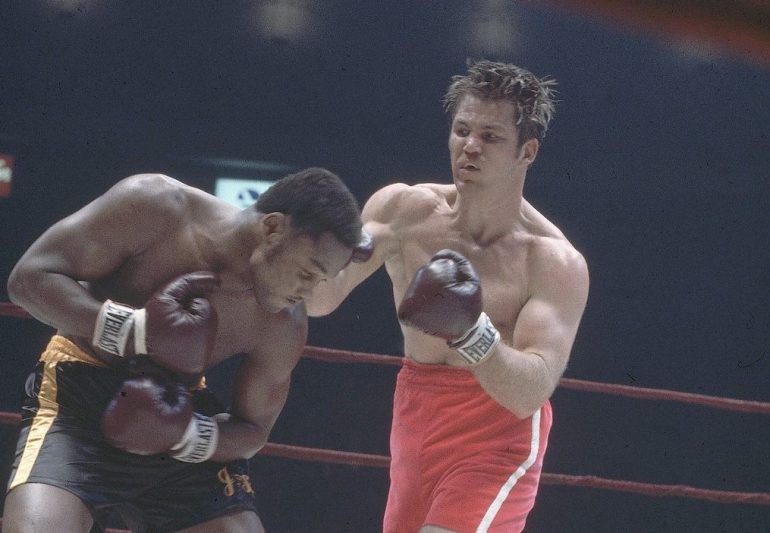 Joe Frazier weighed in at 203 pounds for his war with a 195-pound Quarry on June 23, 1969. Photo by Herb Scharfman/Sports Imagery/Getty Images
23
Jun
by Tom Gray

On June 23, 1969 – a full half-century ago – two super-tough heavyweights duked it out for a portion of glamour division supremacy.

Before a crowd of 16,570 at Madison Square Garden, Philadelphia’s unbeaten slugger “Smokin’” Joe Frazier locked horns with “Irish” Jerry Quarry who hailed from Bellflower, California. Following a classic high-contact duel that would later be named The Ring Fight of the Year, Frazier prevailed via seventh-round corner retirement, but the story behind the matchup is every bit as fascinating as the battle was entertaining.

When Muhammad Ali was forced into exile for refusing induction into the armed forces in April 1967, his undisputed heavyweight championship was split. The WBA elected to host an eight-man elimination tournament that would crown a new champion but, while good in theory, the idea didn’t sit well with everyone. Frazier, upon advice from trainer-manager Yank Durham elected to boycott the tournament, feeling that his lofty position in the world rankings had already been earned.

“Yank’s the manager and if he says go in, I’ll go in with full power, but I don’t think it’s a good idea,” said Frazier in an interview conducted days after Ali had been stripped of his championship. “If I’m all the way up to two or three (in the rankings), why should I go battling number five, six and seven? It really don’t make sense.”

Just how American was the heavyweight championship of the world 50 years ago? The greatest prize in sport was actually broken down into state jurisdiction; Ellis was recognized in 44 states, while Frazier was recognized in the remaining six. It must be said, however, that heavyweight championship boxing still belonged to New York at this time and Frazier’s recognition from the NYSAC carried major clout.

Quarry, despite the majority decision loss to Ellis, was still one of the finest heavyweights in the world. With a record of 31-2-4 (18 knockouts), the quick-fisted contender was known for his counter-punching savvy and tactical awareness. At this point in his career, the 24-year-old Irish-American held wins over former two-time heavyweight champion Floyd Patterson, Thad Spencer and Mathis. 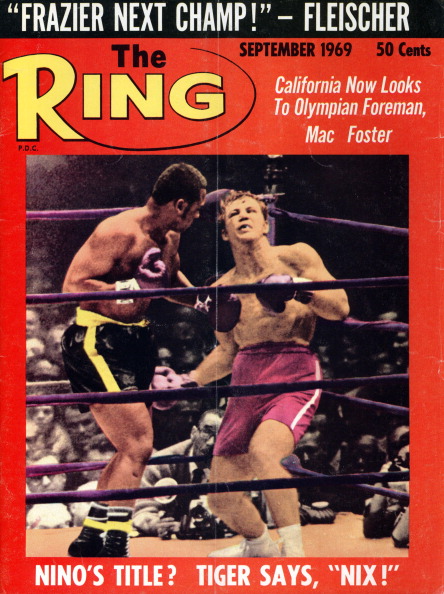 Frazier entered the ring as favorite but took a shellacking from Quarry in the opening round. That wasn’t unusual because Smokin’ Joe’s brilliant bob-and-weave defense took time to synchronize with incoming assaults. The Philadelphia bulldozer didn’t mind falling behind on the scorecards, because once he had an opponent’s timing down, hell would be unleashed. Nobody made Ali miss more than Frazier did in their first fight in March 1971. After picking up the timing on Ali’s sharpshooting, that huge counter left hook and a torrid body attack wore “The Greatest” down to a frazzle. Once asked by ABC’s Howard Cosell if he was surprised that Frazier threw as many left hooks, Ali responded, “I wasn’t surprised he kept throwin’, I was surprised he kept hittin’!”

“Truth is, even though (Quarry) was getting the better of those first-round exchanges, I felt exhilarated,” Frazier would recall in his 1996 autobiography, Smokin Joe, which was co-authored by Phil Berger. “A punchout nose-to-nose, without having to chase the scamboogah – I was in my element. For me, there was nothing like the feeling of letting it rip and seeing which man would break.”

Quarry had surprised everyone with his aggressive tactics but was soon put in his place. Frazier took the jab away with a sharp right-hand counter and drove in punishing hooks and uppercuts to head and body. Quarry also sustained a cut to his right eye in the fourth round and Frazier would target the damaged area with bone-breaking left hooks. As always, Quarry gave it everything. Overshadowed by the heroics of other heavyweights during this golden era, Quarry was as brave a fighter as you could ever come across. After being pulled out of the fight at the end of the seventh round, he wept his heart out.

At 25 years of age, Frazier (24-0, 21 KOs) was just entering his prime. Eight months later, he would smash Ellis in four rounds to win the WBA title. His superiority was further enhanced when the NYSAC aligned with the WBC who also gave Frazier full recognition as champion. The Ring followed suit a few weeks later. To give the Frazier-Ellis bout legitimacy, the exiled Ali was talked into issuing a retirement statement and Ring Magazine founder Nat Fleischer installed Frazier as champ following his victory. Ali, still applying for state licenses during this time, had no intention of retiring.

Quarry, despite excellent victories over Mac Foster and Ron Lyle, would never vie for the championship again. He received big paydays in two fights against Ali and a rematch with Frazier but was stopped in all three contests. His final bout of consequence was a losing effort to Ken Norton in March 1975. A much-anticipated bout with George Foreman, though talked about many times, failed to transpire. Foreman, coincidentally, made his professional debut on the Frazier-Quarry undercard.