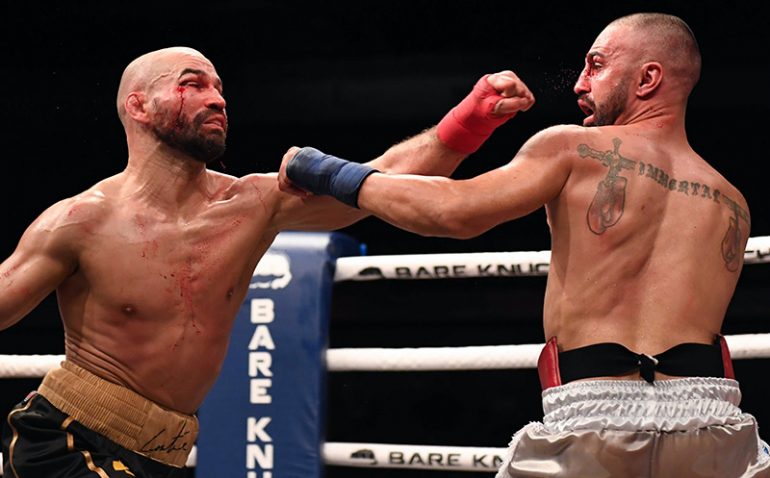 After five rounds of bareknuckle boxing action, Paul Malignaggi and Artem Lobov embraced like old friends, a complete 180-degree turn from their pre-fight promotion, which included Malignaggi spitting on Russian mixed martial arts fighter, in addition to slapping him and hitting him with a microphone. It would seem surprising if you believed it was something deeper than theatrics to sell pay-per-views, but what came a few minutes later would be an even bigger surprise. 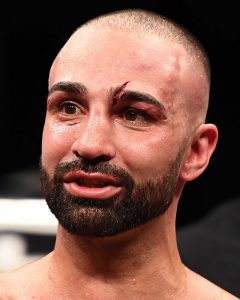 Lobov had his hand raised Saturday, defeating the former two-division boxing champion by unanimous decision at the Florida State Fairgrounds Expo Hall in Tampa, Florida in the main event of Bare Knuckle FC 6. All three judges scored the fight 48-47, likely giving the 32-year-old UFC veteran the edge due to his aggression over the final three rounds.

“Honestly, I’m not even kidding, I got hit with one clean punch all night,” said an incredulous Malignaggi, who had a cut on his left eye brow and one on the corner of his right eye.

“Maybe, and just maybe, this wasn’t meant to be. A lot of people in boxing told me ‘you’re above this, you shouldn’t do this, you’re a two-time world champion, this is beneath you,’ and I thought let me give this sport a shot because I think it’s a cool sport and there’s a built-in rivalry that I think the fans would really love to see.”

The fight was the first for Malignaggi, 38, since 2017, when he was knocked out in eight rounds by Sam Eggington in England and subsequently announced his retirement. He had been essentially semi-retired for the last few years of his fighting career, and has been working mostly as a commentator for Showtime Championship Boxing.

The rivalry he had spoken of was in reference to his back-and-forth with UFC star Conor McGregor, whom Malignaggi sparred before McGregor’s mega bucks showdown with Floyd Mayweather Jr. in 2017. Malignaggi had accused McGregor’s camp of releasing edited versions of sparring videos, and seemed to be angling for a big payday of his own against McGregor. Instead he found himself in a fight against McGregor’s stablemate SBG Ireland teammate Lobov fighting five, two-minute rounds with just hand wraps on his fists and wrists. 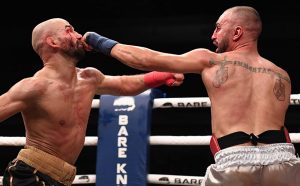 Malignaggi started the bout as the aggressor but Lobov landed the first combination out of the southpaw stance moments after the opening bell. The Brooklynite worked off his jab but landed a straight right to the body in round one and immediately clinched whenever Lobov came close. Lobov was reduced to swinging and missing for the most part as Malignaggi’s feints kept him off balance.

Malignaggi came out more aggressively in the second, stepping into his jabs and targeting right hands to the midsection. The best punch of the fight came with 40 seconds left in the round, when Malignaggi landed a right hand to the chin of Lobov that was as crisp as any he had thrown in his 16-year pro career. Unfortunately for Malignaggi, it may have had a greater impact on himself than the man who was hit, and his notoriously fragile hands may have betrayed him there.

“I’m pretty sure when I threw that jab to the stomach and right hand to the head in round two, I’m pretty sure my right hand is broken. I felt a pain that I’m pretty familiar with,” said Malignaggi (36-8, 7 knockouts), who added that his left hand was also sore.

Lobov began pressing forward in the third, reaching around with right hooks and switching stances before throwing to get closer. A straight left hand to the chin sent Malignaggi backwards. 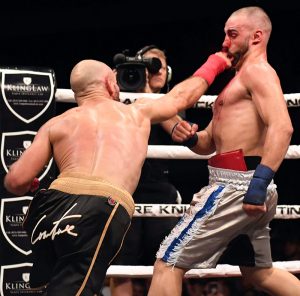 The last two rounds, Malignaggi was essentially a one-handed fighter, limited to just his jab as Lobov became increasingly unafraid of the man standing opposite of him. Lobov began to attack in combination, roughing Malignaggi up against the ropes as Malignaggi tried to clinch. Though Lobov rarely landed cleanly against his elusive foe, Malignaggi had little left in his fists to launch an attack of his own.

“It was an emotional fight. I came in on the back foot a little more than usual. I still pressed, that’s a nice decision win for me,” said Lobov, who had cuts around his face as well. Lobov moves to 2-0 in bareknuckle fighting, while his MMA record is 13-15-1 (1 NC).

“Being in there with a professional boxer, it was my first time. The whole fight, more or less, was boxing. We clinched very little. He was good at defending and I wanted to box myself as well. Also, without gloves, the punches are much faster, so it’s harder to time them and slip them, but we got the job done.”

The fight made an impact on social media with “Paulie”, “Artem” and “#BKFC6” all trending on Twitter in the U.S.

“To me, there is many people out there who talk a lot of shit, and then they don’t show up. You know, Paulie, he shows up. You can like him or hate him, but he shows up. I will always respect a fighter for that. The show goes on,” said Lobov.

Another pro boxing champ – former junior welterweight and welterweight titleholder Randall Bailey – was also set for the card but his fight against Brazilian MMA fighter Daniel Santos was canceled at the last minute, reportedly due to a medical issue. Neither fighter weighed in, and no official word was given as to why the fight was canceled.