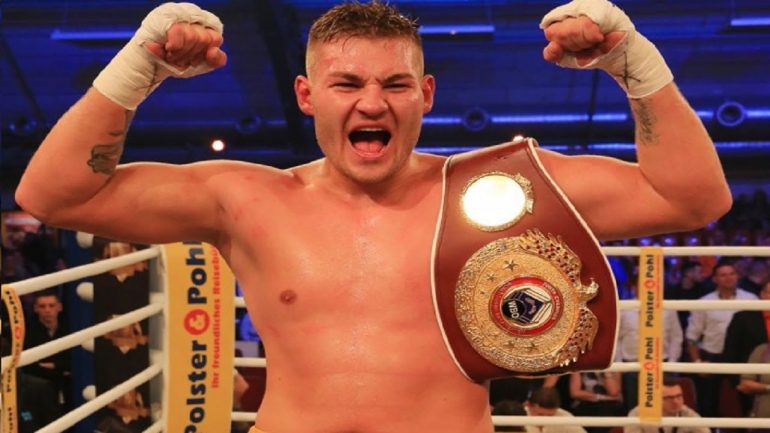 Unbeaten heavyweight Tom Schwarz will receive the chance of a lifetime when he meets the enigmatic Tyson Fury at the MGM Grand in Las Vegas on Saturday.

Schwarz (24-0, 16 knockouts) isn’t given much chance by the oddsmakers – William Hill list him at 12-1 – or boxing insiders. However, the recently turned 25-year-old from Magdeburg, Germany believes he has a big part to play in the heavyweight division and points to Andy Ruiz Jr.’s recent upset over Anthony Joshua as further proof that anything can happen when the big men collide.

“My tattoo on my right arm says that I am the future – the future of the heavyweight division,” Schwarz (24-0, 16 knockouts) told The Ring through Christof Hawerkamp of SES Boxing. “That’s my point of view, my message for boxing fans.

“Just look back at the other weekend – it’s heavyweight [boxing]. This is a good chance for me to show the world what I can do it and I may win. Andy Ruiz showed the other weekend and – by the way – what was his chance?”

Schwarz knows he’s in the fight of his life against “The Gypsy King” and has prepared diligently for the past few months at a hotel in the Bavarian Forest, as well as the state of the art Kinema Sports school with his strength and conditioning coach Sepp Maurer.

The last two weeks of his training camp have been spent in Las Vegas to acclimatize.

“My coaches, René Friese and Roberto Norris, choose some sparring partners with the size of Tyson Fury – that was not an easy task. But nobody can imitate Tyson Fury – he is so special, unorthodox and full of surprising action.

“He won’t be easy to fight. Inside the ring he’s very quick on his feet for his size. You can never tell what he will do next. He has very good boxing skills and he’s very flexible. On June 15 there will be two fast heavyweights in the ring. I will need to develop a good strategy. That’s what we worked [on] for the last three, four months.”

SES founder Ulf Steinforth built one of the most impressive stables in mainland Europe and believes this opportunity was too good to turn down.

“Tom Schwarz, since the age of 18 or 19, has been seen as a big prospect in Germany. He’s won most of his fights with early knockouts. Many fighters haven’t wanted to take the risk of fighting him – he’s a young, unbeaten heavyweight with exactly the same record (24-0) that Tyson Fury had when he fought Wladimir Klitschko. Maybe that will prove significant – and he has nothing to lose.”

Fury-Schwarz will be televised live on ESPN+ in the U.S. and on BT Sport Box Office in the U.K.