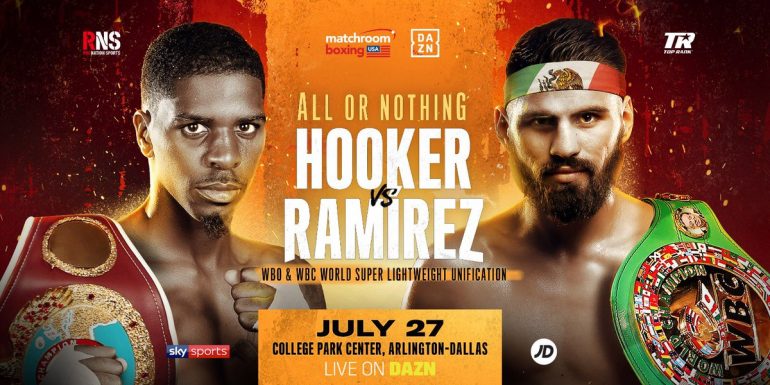 Top-rated junior welterweight world titleholders Maurice Hooker and Jose Ramirez will square off in a unification fight on July 27, it was announced Wednesday afternoon by Matchroom Boxing, which will co-promote the bout with Top Rank.

The 12-round title unification bout, which will take place at the College Center Park in Arlington, Texas, will be streamed live on DAZN.

A press conference will take place on Friday at Texas Live (starting at noon local time) in Arlington.

Ramirez brings the WBC title and and Hooker brings the WBO belt to the compelling clash. Both fighters are unbeaten and are considered among the best at 140 pounds, where the winner will likely be considered No. 2 at junior welterweight  behind the winner of World Boxing Super Series (WBSS) final between Regis Prograis and Josh Taylor, which will take place this fall.

The fight also marks a collaboration between Top Rank, which promotes Ramirez, and Matchroom Boxing and Roc Nation, whom co-promote Hooker. 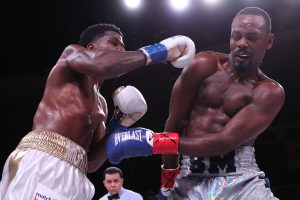 Hooker (26-0-3, 17 knockouts) will likely have the crowd support as he resides in the Dallas area. In his last bout on March 9 in Verona, New York, Hooker defeated Mikkel LesPierre by unanimous decision over 12 one-sided rounds.

The 29-year-old Hooker made the first defense of his WBO title on November 16, overcoming a knockdown to stop Alex Saucedo in the seventh round in Saucedo’s hometown of Oklahoma City.

“I want to show the world that I’m the best in the 140-pound division,” said Hooker. “My dream is to become the undisputed champion in my weight class. This unification fight with Jose Ramirez is a major step towards that goal.

“Training camp for Team ‘Mighty Mo’ Hooker is well underway and I’ll be at my absolute best on July 27 to take the green belt from Ramirez. It will be a thrill to do this in front of my home crowd and I’m looking forward to the energy they’ll bring to the ring. I am a dream killer, and Ramirez will be my next victim come July 27.”

Ramirez (24-0, 16 KOs) has built a solid fan base throughout California’s Central Valley, where he draws sellout crowds in Fresno. The 26-year-old Ramirez resides in the nearby farming town of Avenal.

In his last fight on February 10, Ramirez defeated contender Jose Zepeda by majority decision. The fight was very close, but Ramirez’s aggression was the deciding factor in Ramirez getting the nod on the scorecards. 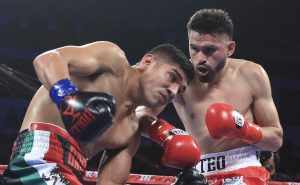 Ramirez is trained by Robert Garcia, whose first fight with Ramirez took place on September 14, a unanimous decision over Antonio Orozco.

“I am ready for my opportunity to unify the titles,” said Ramirez. “To get the opportunity to be a unified champion is a blessing for me. I’m thankful to Bob Arum and Top Rank for believing in me to go out there and get the job done. This is a fight I wanted. I told my manager, Rick Mirigian, that I wanted to fight Maurice Hooker. I know this fight can take my career to the next level. I want to make it easier for people to decide who the best 140-pounder truly is.”

Ramirez may have the deck stacked against him, especially fighting near Hooker’s hometown. It is something Ramirez welcomes.

“I’m treating this fight the same as when I won the title in New York City against Amir Imam. He was the taller, bigger fighter. It’s sometimes easier fighting someone in his backyard because it takes away some of my responsibilities behind the scenes. As the underdog, I have everything to win. I’m ready to prove myself and show everyone what Jose Ramirez is all about. I can’t wait to bring Hooker’s title back with me to California.”

Ramirez and Hooker are ranked Nos. 3 and 4 by The Ring, respectively.