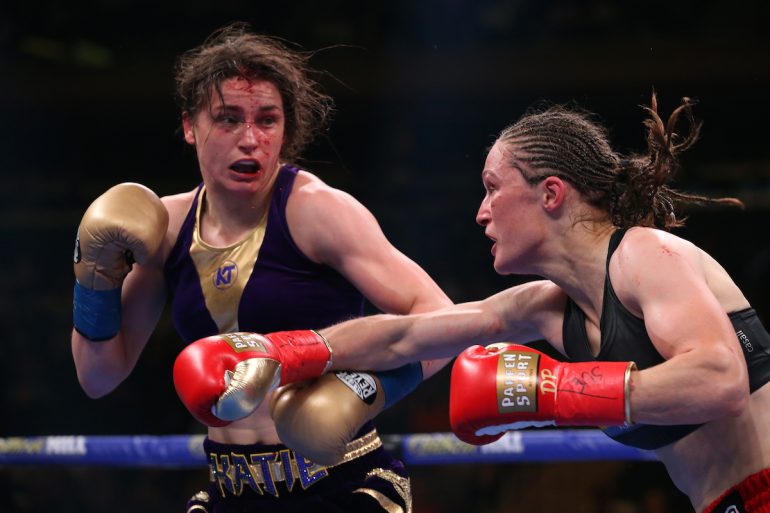 NEW YORK — Katie Taylor and Delfine Persoon set the bar very high for the heavyweights in the main event.

After ten rounds, one judge had it even at 95-95, while the other two had it narrowly at 96-94 for Taylor, a 2012 Olympic gold medalist from Bray, Ireland, making her the third female to be undisputed at her weight, joining Claressa Shields at middleweight and Cecilia Braekhus at welterweight.

The fight brought back memories of Christy Martin vs. Deirdre Gogarty from 1996, as both fighters ended the fight with cuts and swelling from what may have been the best women’s boxing fight in recent memory.

It was a rough fight from the opening bell as Persoon (43-2, 18 KOs) pushed forward behind a hard jab, landing with more authority than Taylor’s faster, but lighter jab.  The slower, awkward shots from Persoon still managed to land on Taylor, and Persoon continued the roughhousing in round three, trying to bang Taylor with her shoulder. 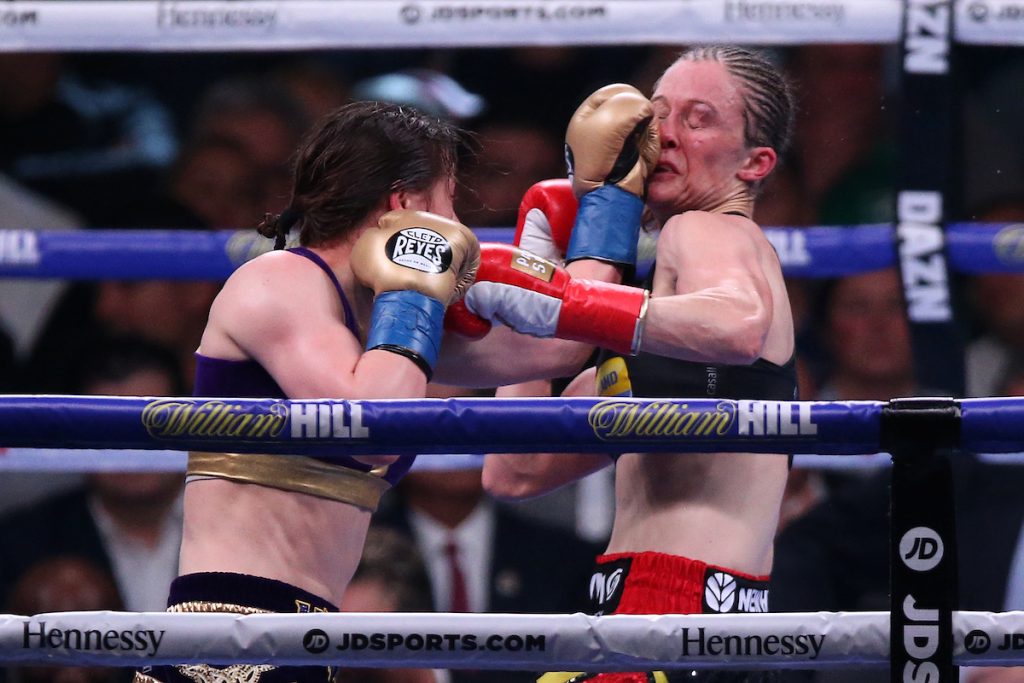 Taylor began to assert herself more in round five, getting off her punches quicker but Taylor emerged with cuts on her scalp and the bridge of her nose as Persoon succeeded in forcing the rough brawl she has wanted. Persoon wasn’t unmarked herself, sustained a cut above her right eye and swelling above her left, which progressively worse.

“It was a very, very close fight,” said Taylor. “I felt like I won the earlier rounds and she came on strong at the end. But I feel like I did enough to win that fight.

“Persoon was a fantastic champion and she is very, very strong. It all made for a fantastic showcase for women’s boxing. I knew this was going to be the biggest and hardest fight of my life. But I am great at digging deep. I am born for fights like these in the trenches. I worked so hard these past few months in training camp for this kind of fight. My coach [Ross Enamait] is the mastermind behind this and I am so grateful.”

The crowd tried to bring Taylor back to life, belting out the chorus to Oasis’ “Wonderwall” after the music had died down to begin the ninth. Taylor responded with a left hook that knocked sweat off of Persoon, but Persoon only answered back with a smile and continued to push forward. The crowd booed vociferously at the conclusion of the ninth when Persoon landed a right hand on Taylor after the bell to end the ninth.

The two traded punches toe to toe without any pretext of boxing, but Persoon’s physical strength had worn Taylor down, and an exhausted Taylor wobbled in the final moments to the bell.

Persoon (116 of 586) threw more and landed more than Taylor (103 of 410), according to Compubox stats, with a 55-28 edge over the final three rounds. The loss is the first for Persoon, a police officer who cashed in vacation leave to train for this fight, since a 2010 stoppage defeat against Zelda Tekin. Persoon was fighting outside of Belgium for the first time, and had held the WBC title for five years, making nine successful defenses.

Taylor, who won five World Championships as an amateur, admitted she should have boxed and used her speed and skill more than she did, but was open to running it back with a second fight.

“I am definitely happy to give Delfine a rematch. There are big fights out there for me. There’s Amanda Serrano and I think that fight should be next but I am really happy to fight whoever,” said Taylor.