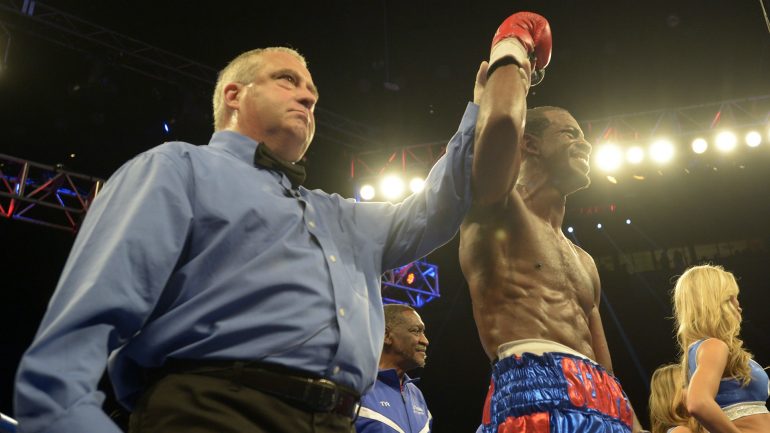 27
May
by Sporting News

The timing of Jamel Herring’s improbable victory over Masayuki Ito to capture the WBO junior lightweight championship on Saturday night couldn’t have been scripted better.

The U.S. Marine Corps veteran also won the fight during Memorial Day weekend in front of many active and reserve U.S. Marines as part of a sold-out crowd at the Osceola Heritage Park in Kissimmee, Fla.

But what made this victory truly special was the fact that Herring won the world title on the same day that his late daughter would have turned 10 years old.

“I want to dedicate this fight to my daughter, Ariyanah, who passed away from SIDs. Tonight would have been her 10th birthday, and I dedicate this title to her,” an emotional Herring said in the ring following his victory. “Ito was a tough competitor, but I always believed I could win a world title. This is a dream come true, and to do this on Memorial Day weekend makes it even sweeter.”

Herring’s southpaw stance gave Ito problems, as he asserted his jab early and closed the fight out much stronger than his opponent to pull off the upset.

The final moments of this World Title Fight. Who do you have winning? #ItoHerring | @ESPN pic.twitter.com/hgxpMc4UzA

“When we signed Jamel, a lot of people had their doubts, but he showed the heart of a world champion,” Top Rank chairman Bob Arum said. “He’s a true Marine and an American hero. We are so proud of what this young man has accomplished.”

A unifying title fight could be in store for Herring (20-2, 10 KOs), as WBC junior lightweight champion Miguel Berchelt came into the ring to congratulate Herring.

Herring’s stablemate and WBO welterweight champion, Terence Crawford, was also in attendance in support of the winner and new world champion.