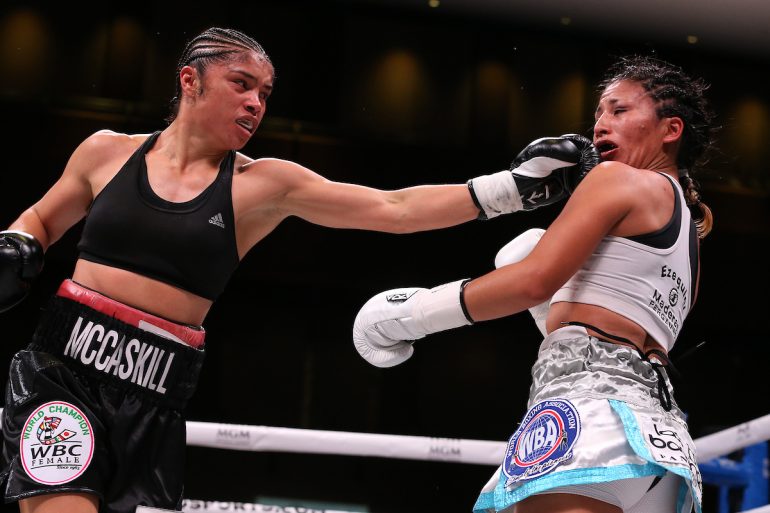 Jessica McCaskill (L) adds the WBA belt to the WBC title she won in her previous fight with a decision over Anahi Sanchez. Photo by Ed Mulholland/Matchroom Boxing USA
25
May
by Michael Baca II

In a sure candidate for female fight of the year in 2019, Jessica McCaskill became the unified WBC/WBA junior welterweight champion with a unanimous decision (99-91, 98-92, 96-94) nod over Anahi Sanchez.

“It was for sure non-stop,” said McCaskill. “Great accuracy from her — lots of power.”

McCaskill, Chicago, Illinois, sought an all-out war from the start of the opening round. The 34-year-old bit down and lunged forward with hooks to try and catch the Mexican off-guard but Sanchez was calm off the back foot and didn’t panic when a right hand bopped her on the chin to start the second round. On the final second of the same round, Sanchez returned the favor with a right of her own to stun McCaskill to her corner. That moment was a turning point for Sanchez, of Pergamino, Argentina, as she started to take control through the middle rounds and hand McCaskill the war she was looking for.

Sanchez (19-4, 11 KOs) had a one-two that would not only start to ward off McCaskill but become an offensive weapon. Seemingly every time McCaskill landed a clean shot in the middle rounds, Sanchez would follow it up better with a couple of her own. McCaskill became too aggressive for her own good against the sharp counterpuncher and Sanchez also started to switch stances in order to throw in different dynamic against McCaskill’s straight-forward style.

? Two Champions Fighting Like Champions ?#McCaskillSanchez had it ALL! ? pic.twitter.com/vIaD3YlOR3

The momentum wouldn’t stay with Sanchez by the end, however, and in the last two rounds McCaskill showed great conditioning to overwhelm a heavy-breathing Sanchez.

They were rounds McCaskill seemingly needed in order to capture victory in what was a very close fight action fight. Both had their moments and their stretches of dominance, but there was no doubting the fight was close but there was certainly no question the fight was great.

“I got no love from the judges or the referee,” Sanchez said after the loss.

“I thought the scorecards were a little drastic,” admitted McCaskill.

“I win today but I prefer to win by knockout,” Yelesussinov explained after the victory. “We expected a little bit different fight. This guy was a little uncomfortable.

“I think I need to work on my timing more.”

Still adjusting out of his amateur style, Yeleussinov (7-0, 3 KOs) wasn’t afraid to get on the inside and trade but his Chilean opponent was well-suited for that kind of fight. Norambuena, who took the fight on two day’s notice, was forced backward by an uppercut to the body in the opening minute, but his counterpunching kept him afloat.

Yeleussinov, 28, wasn’t getting hurt by the counters but the clean shots took him out of rhythm often and it spurred confidence in the late replacement. Norambuena (3-2-1) was also taking the shots well but much of that had to do with Yeleussinov unable to land a crisp power shot, thus resulting in a disappointed post-fight interview.

In the opening bout of the DAZN undercard, Lorenzo Simpson looked impressive in his first-round stoppage win over Rafael Garcia. The super middleweight bout was scheduled for four rounds.

Simpson, a 19-year-old prospect from nearby Baltimore, thrilled his hometown crowd with a rally of uppercuts that left Garcia hurt on his feet and too bewildered to throw back. Referee Harvey Dock stepped in to stop the fight at the 1:19 into the contest, just as a final blow rocked Garcia backward before the ropes kept him upright. Garcia (9-3, 6 KOs) had never been stopped before.

Simpson (4-0, 3 KOs) may have rated his performance a C in the post-fight interview, but it was a near-perfect outing even though he didn’t get the knockdown he yearned for. Garcia had never been dropped before as well, and while that still stands technically, Simpson outclassed him with hand speed and footwork alone.

Leading up to the TKO, Simpson started by fighting off the back foot but eventually walked Garcia down and broke him down with body shots. With Garcia behind his high guard, Simpson was able to let his quick hands go and the accuracy made it all that much harder to keep up with.

“Thank you to everyone,” said Simpson after his self-evaluation. “Please follow and support me.”