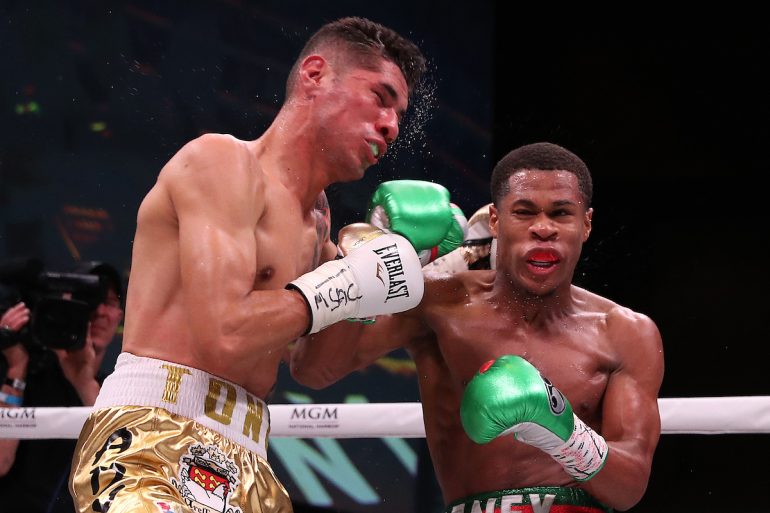 “There were rumors I didn’t have punching power,” said Haney after the win. “But as you can see I can [punch].”

After signing with DAZN and linking up Devin Haney Promotions with Eddie Hearn’s Matchroom Boxing, who co-promoted the card from the MGM National Harbor, Haney’s debut on the new platform was perhaps his best performance to date.

“That was like an artist painting a beautiful picture then signing his name at the end,” explained Hearn on the DAZN stream. “America has a superstar on their hands – he’s 20 years old!”

Haney (22-0, 14 KOs) hurt Moran with a body shot before connecting on an overhand right hand to the chin that caused the show-stopping finish. Moran (24-4, 17 KOs), who had never been stopped before, folded to the canvas in an instant after the punch landed and he remained there on his back for awhile as he was monitored by a ringside doctor, which tempered Haney’s celebration. Referee Kenny Chevalier didn’t bother to give him a count, resulting in a KO.

“One thing my Dad always told me is when you get a fighter hurt, go to the body,” said Haney about the knockout. “So I did, then I went over the top.”

Fighting out of Las Vegas, Nevada under his father’s tutelage, Haney was stellar before closing the show. The hand speed and nimble footwork made it tough for Moran to keep up out of the gate and in the first two rounds a straight right hand and lead left hook kept him honest on separate occasions. Starting in the third, the Mexico City native attacked the body in order to slow Haney down, but counterpunching ability of The Ring’s No. 6-rated lightweight slowly broke Moran down.

By the fourth round, Moran’s nose was bloodied and in the fifth round he suffered the bad luck of getting a knockdown ruled after his feet tangled with Haney’s in the same instant of taking a body shot. Haney’s shoulder roll defense was also on point as he got into an untouchable groove, and it prefaced the perfect finish any fighter yearns for.

“I just want to beat whoever they put in front of me,” proclaimed Haney.

It took less than a minute for Croatian heavyweight Filip Hrgovic to win his United States debut after dropping and stopping Gregory Corbin in the first round. The contest was scheduled for ten.

“It wasn’t enough time to show,” Hrgovic said in broken English in response to if we saw his best on this night.

Hrgovic (8-0, 6 KOs) flattened Corbin to the canvas with a chopping right hand – seemingly the first clean punch landed in the fight. The shot caught the side of Corbin’s head as he tried to make it physical on the inside, and he laid on the canvas as if he’d been kayoed. Corbin (15-2, 9 KOs) got up just before Brent Bovell’s count got to ten, but the referee didn’t like how the 38-year-old looked after struggling to stay upright, thus waving it off sixty seconds in. It was the first time Corbin had been stopped.

Hrgovic, 26, may not have been able show more in is U.S. debut, however, there is already intrigue from the hulking six-foot six-inch heavyweight from Zagreb, who’s already faced ample competition in his first eight fights.

American heavyweight contender Michael “The Bounty” Hunter dominated Fabio Maldonado for the extent of two rounds to earn a second round TKO victory. Scheduled for ten, the contest was sanctioned by the WBA for a minor belt.

“We’re all 200 pounds and eventually they’re gonna break because I have more heart,” explained Hunter after the win.

After starting his career patiently to become a solid cruiserweight contender, Hunter (16-1, 11 KOs) extended his KO-streak to four in his heavyweight campaign and has looked impressive in the process. Hunter, 30, hurt his Brazilian foe with a right hand in the opening minute of the fight, and proceeded to chop him down with a wide array of hooks and body shots.

Maldonado (26-3, 25 KOs) came into the fight game having never been knocked down let alone stopped, but a right hand in the second round started his unraveling. The 39-year-old stumbled into the ropes to get a standing eight-count issued from referee Harvey Dock, and soon enough he fell to his belly for a knockdown after Hunter followed-up. Hunter proceeded to keep landing clean shots to force Dock to wave the fight off at the 1:45 mark of the second just as Maldonado was rocked again to the mat.

“Please, I would love to,” Hunter replied on the prospect of fighting Anthony Joshua next week should Andy Ruiz bow out. The heavyweight contender holds a WBA heavyweight trinket, which could get him that fight with patience and continued success.