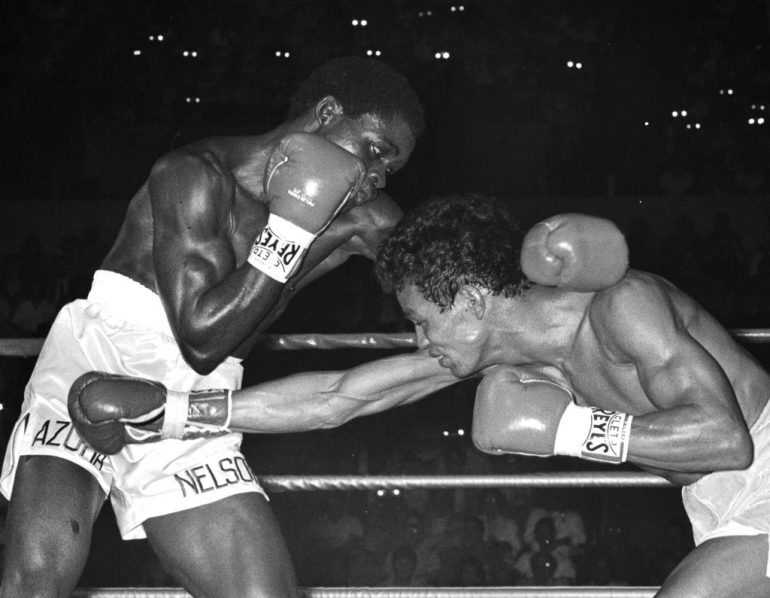 Marcos Villasana (right) against Azumah Nelson, Photo from The Ring Archive
24
May
by Anson Wainwright

Granite-chinned Mexican pressure-fighter Marcos Villasana gave many of the top featherweights of the 1980s-early 90s stern examinations before winning a world title at the fifth attempt.

Born in Lomas de Chapultepec, Guerrero, in the south west of Mexico on June 11, 1960, Villasana grew up one of 10 brothers and his family were farmers.

“Sometimes at noon, covered in sweat, I would say to myself, ‘I want to help my parents not be peasants anymore,'” Villasana told The Ring. “It is one of the greatest satisfactions I have. I helped all my family to stop being peasants, [helped them] start a business or do another activity. Three have died, there are seven of us left.”

As a child Villasana watched the legendary Ruben Olivares and Jose Napoles on TV. They impressed him and he decided to follow their example and try to make it as a boxer, his journey beginning at 12 years old.

The kid had a rugged style, but his natural ability caught the eye of a local coach.

“I used to throw sand into a sack, tie my hands in a rag, put on my gloves and hit the sack,” Villasana said of his basic training methods. “When I came to train with Zurdo Arce in Acapulco, I had to travel from Lomas de Chapultepec, he asked me about my coach.

“I told him I did not have one and he was surprised that I already knew how to throw the jab. I told him that I liked watching the fights and that you learn by watching television.”

Villasana embarked on a brief amateur career, winning all 10 outings by knockout before turning professional as a 17-year-old in January 1978.

In the first 18 months of his career, Villasana went 17-0-1 before suffering back to back losses. In his first defeat, he was stopped due to an injury but later gained revenge stopping the same opponent inside a round. Following that brace of setbacks, the heavy-handed featherweight rebounded to win his next 15 bouts, collecting a national title along the way.

On the verge of a world title fight, Villasana lost on cuts to Mario Miranda in Colombia. From there he relocated to America, earning his first world title opportunity against Azumah Nelson at the Forum in Inglewood, California in February 1986. Villasana dropped a majority decision.

The two met 18-months later in a rematch and this time Nelson, who had a reputation for being better in a rematch, retained his WBC strap by unanimous decision.

Undeterred, the Mexican star turned back big punching Jaime Garza to earn a third title shot, this time against WBA titleholder Antonio Esparragoza. The two went back and forth in an action-packed encounter, which ended in a draw.

The quality of that performance earned Villasana a bout against WBC titleholder Jeff Fenech in April 1989. Although outclassed, his toughness shone through when Fenech broke both of his hands on Villasana’s head.

The Mexican warrior is proud that neither Fenech or Nelson, two modern-day greats, were able to stop him.

“Fenech said he was going to knock me out,” Villasana recalled.

“Azumah, I remember him saying, ‘I’ll knock you out in five rounds.’ At the press conference, I got up and asked the translator to tell him that when I was little, I broke coconuts with my head. The journalists were impressed, they said, ‘This one has guts.'”

After a 14-month hiatus, Villasana was given a fifth world title shot. Fenech had relinquished his title and he was matched against Paul Hodkinson to fill the WBC vacancy.

The Brit got the better of the action and was way ahead on points when Villasana poured on the pressure in the eighth, causing both of Hodkinson’s eyes to swell. The Mexican warrior closed the show in the final seconds of that session, finally securing himself a world title with an unlikely stoppage.

Villasana made three defenses over the next 18 months before meeting Hodkinson in a rematch. He lose a wide decision and fought once more before retiring with a record of 55-8-3 (47 knockouts).

Looking back, the former titleholder has three moments that he most cherishes.

Villasana, now 58, lives in Acapulco. He has five children and one of them, Marcos Jr., is a professional boxer. In retirement, Villasana ran a seafood business in Mexico City before returning to Acapulco where he now works in public transport. He also has a WBC pension that helps make ends meet. 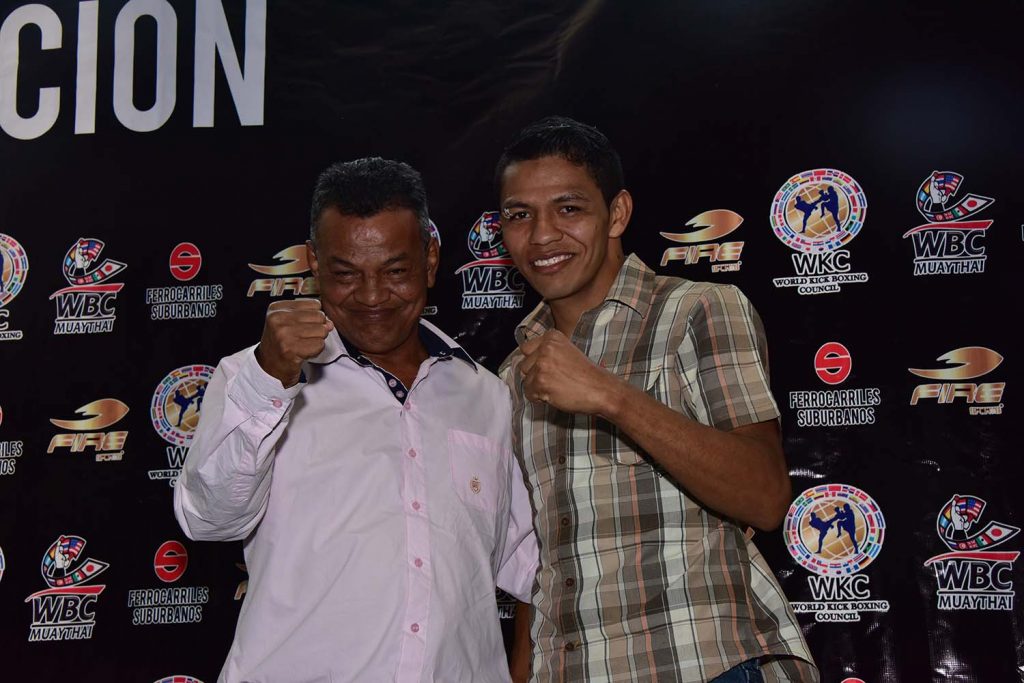 Father and son. Photo courtesy of the WBC.

“My promoters did not pay me enough, but I’m fine. I’m not rich but I live quietly,” he said. “I drive a couple of days a week, just because I like to talk to people, everyone knows me.

“I never get drunk, I’ve never drank. I smoke, but I started smoking after my retirement from boxing, never before.”

BEST JAB
Antonio Esparragoza: Well executed, with the arm straight and gave a twist with the fist before hitting.

BEST DEFENSE
Azumah Nelson: Dodged many blows; he had movement.

FASTEST HANDS
Paul Hodkinson: It overwhelmed you, he did not hit hard, but it was very fast. Mario Miranda was ranked No. 1 [in the world] and in the first three rounds I did not see his punches. The good thing is, the more he hit me, the more I liked it. Miranda had enormous qualities.

BEST FOOTWORK
Esparragoza: With his lateral steps, he was not a fixed target.

SMARTEST
Nelson: He was not the toughest, doesn’t have the hardest punch, but he’s the most intelligent. He was so clever inside the ring; he knew how to box and how to avoid problems. Every time I got him, he clinched or pushed me. Nelson had a lot of unusual resources to get out of problems and compromising situations.

STRONGEST
Nelson: I landed my best punches on him and it seemed as if I didn’t. He had the strength to assimilate all my hard shots. It really seemed as if I couldn’t hit hard.

BEST CHIN
Nelson: I connected some very strong hooks and I did not move him or Marcos Villasana. They never knocked me out (either). They knocked me down, I think only twice, and I got up to fight. I fell almost by slipping, but they never hurt me. I was always very well-prepared. Nelson was a 100 percent professional.

BEST PUNCHER
Jaime Garza: He made me dance, but he did not drop me. Without any doubt, he was the best puncher of all rivals I ever faced. He had a lot of power, more than Nelson. However, the difference is he was not able to resist [my power]. He could hit, but he could not stand up to my power shots. Azumah was able to throw and receive.

BEST BOXING SKILLS
Jeff Fenech: He had great footwork and moved a lot. He was very hard to hit and knew all the tricks when he got to the ropes. The thing with Fenech is that I did not have a clear fight with him; he was street smart, he was tricky, he had a lot of resources. He did not punch hard, but his greatness was in other characteristics; he knew how to stay away from problems.

BEST OVERALL
Nelson: He can punch really hard and take any punch. He was really the most complete fighter I ever faced.