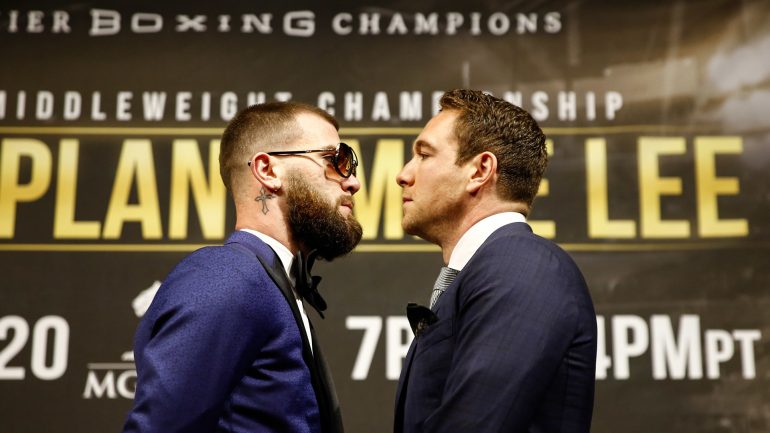 23
May
by Sporting News

NEW YORK — Caleb Plant couldn’t contain himself. His body language said it all.

“This has been a culmination of years of hard work, sacrifice, pain, in and out of hospitals,” said Lee, “most importantly getting somewhere no one thought I could get.”

Plant immediately began shaking his head. Despite the shades covering his eyes, you could see the disgust plastered over his face.

After all, it’s hard for the 26-year-old champion to hear his opponent paint a picture of pain, when inconceivable tragedy has been attached to Plant’s name and not Lee’s.

In January 2015, Plant had to make the painful decision of taking his 19-month-old daughter, Alia, off life support after she had been suffering from repeated seizures caused by a brain condition, as reported by the Tennessean.

After defeating Jose Uzcategui to become a world champ and dedicating the victory to Alia in January, tragedy struck Plant again in March, when his mother was shot and killed by a police officer following a heated confrontation. (USA Today reported that she flashed a knife at a sheriff, leading to the fatal gunshot.)

That being said, hearing Lee talk about his own pain, when he has a finance degree from Notre Dame and can seemingly cope without boxing, didn’t sit well with Plant at all.

The newly-minted world champ let Lee know about it by giving one of the most impassioned speeches you’ll ever hear at a boxing press conference.

“So, if this guy ever thought for one second that I would let him mess this up for me and send me back there — because unlike him, I have everything to lose; this is how I keep a roof over my head and food in my belly — that’s something he don’t know anything about,” he continued.

“So, if he thinks he’s going to mess this up for me, he’s not half as educated as I thought he was.”

Pausing for a second, Plant (18-0, 10 KOs) let Lee (21-0, 11 KOs) know that there’s no way that he’s walking out of the MGM Grand Garden Arena without the hardware that he’s been working all his life for and just won in January.

“Every night from now until July 20, I hope him and his team before they go to bed at night envision the words ‘and still,’” Plant said, “because that’s all that him and his team and any of you who are tuned in are going to hear July 20.”

“Unlike him, he has nothing to lose. But for myself, I have everything to lose.”@SweetHandsPlant gives a passionate speech ahead of his fight vs. @MikeLeeBoxing on July 20. #PlantLee pic.twitter.com/WMIgyefyIx

After the faceoff between the two, Plant stepped off the stage to his right and granted Sporting News a one-on-one interview, still fired up over what he perceives as Lee’s gall to talk about pain.

“He hasn’t had nightmares about some of the things I’ve been through,” Plant told SN. “I think in those moments of being in that deep water, it’s have you been in that deep water? Everyone’s been in deep water and I don’t claim to have the worst story because I know I don’t. I’m a blessed man, I’ve had many blessings in my life. But I’ve had many trials as well and those trials have made me have to dig deep.”

Choked up, Plant briefly stopped and exhaled to gather himself.

“I’ve had to look in the mirror and really decide if I could go on or not and every time, I said, ‘Yes, you will.’

After each tragedy, Plant turned to boxing as a solace, just like he’s doing now.

“Some people say pain is a fuel for greatness,” Plant said, “and if that’s true, then my tank will forever be full.”

“Sweethands” has already won over plenty of boxing fans for his fighting style and more importantly, fortitude. He can win over plenty more with another rousing performance, with this one bound to get more eyes, as it will serve as the co-main event on FOX to Manny Pacquiao vs. Keith Thurman on FOX Sports pay-per-view.

After dedicating his inspiring win over Uzcategui to Alia five months ago, Plant said that he’ll be dedicating his first title defense to his late daughter, mom and one more person.

“But for myself, I have everything to lose.”