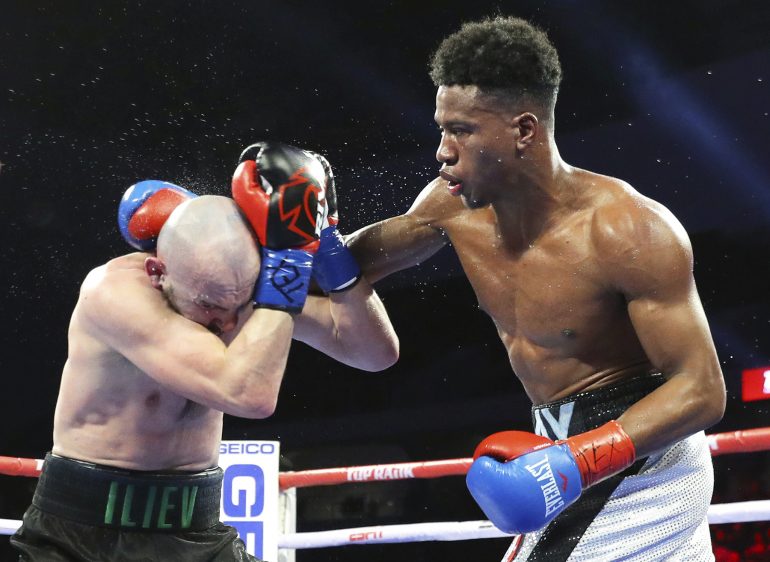 Patrick Day had been waiting patiently for the call to finally bring some clarity to who he’d fight next. Conversations were had with the Erickson Lubin camp and Kell Brook’s people too but so far nothing was sticking. The only thing that was for certain was that he knew he’d be back in the ring in June sometime, somewhere.

Now in Tokyo, training and sparring with middleweight Ryota Murata at Teiken Gym, Day continued his routine that has seen him ride a six-fight winning streak.

Finally, he received the text message he’d been waiting for, informing him that he’d face Carlos Adames (17-0, 14 knockouts) on ESPN in chief support of the Richard Commey vs. Ray Beltran, an IBF lightweight world title fight, on June 28th from Temecula, California.

To sweeten the pot even more, Day (17-2-1, 6 knockouts) has been informed that by fight night, his contest with Adames could wind up being a final eliminator for a junior middleweight title shot as well. There’s speculation that it could be for the WBO belt as Munguia is expected to vacate and move up to middleweight soon, though as of now Day isn’t ranked by the WBO.

An alternate for the 2012 Olympic team behind a guy named Errol Spence, Day is use to the sidelines and familiar with its view. Now, potentially one fight away from his coveted shot, he spoke to RingTV at Teiken after his final sparring session before his flight back to New York City.

Ring: What are your initial thoughts on your next opponent, Carlos Adames? Have you fought anyone like him before?

Patrick Day: Well as a pro I haven’t fought anyone like him. I have a lot of amateur experience as well. I’m a U.S. national champion, an Olympic alternate, so I mean I’ve been around the block. I’ve fought internationally, I fought top guys nationally in the amateurs. It’s not going to take long to recognize certain things about style. With the right sparring that my trainer is going to set up for me, I’ll be good.

Ring: You only have six weeks to prepare for what looks like on paper as your toughest fight to date, without giving away too much, what’s your plan of action over the next month and a half to get where you need to be?

Day: Mostly it will be to work as hard as I can. The effort will always be there on my part. My trainer [Joe Higgins], with the right sparring, we’ll work on the game plan, and that’s that. As long as I give the effort, my part is done. I’ll have my trainer meet me halfway and we’ll be ready.

I was already expecting to fight in June. First it was going to be June 1st on the Anthony Joshua undercard. Actually we were even looking at May 18th on the Wilder undercard but that didn’t workout. We called out Erickson Lubin. He didn’t want that fight. Then we called out Kell Brook for June 1st and he wasn’t interested. My promoter [Lou DiBella] has good relations with his promoter so we figured, why not? But those two dates didn’t work out so I’m already in shape because I was preparing for those dates, so I came here [to Tokyo] not knowing what was next, but just expecting to fight in June or July. Then June 28th popped up and it was perfect.

Ring: You’re going to be on ESPN. What does it mean for you to be featured on a nationally televised card and one that’s going to be anticipated for a lot of excitement with hard hitters Richard Commey and Ray Beltran?

Day: This is great. It’s exactly what I’ve dreamed of. I’ve been on national TV before but not to this scale of exposure. I fought on ShoBox like four years ago and that was just alright [in terms of audience]. I’m hoping to give everyone a good impression.

Ring: Adames apparently has like 35 siblings. I don’t know how that’s possible. What can you tell us about your upbringing for us to understand who Pat Day is?

Day: Well certainly it wasn’t like his upbringing. Everyone thinks of the stereotypical boxer upbringing, being raw and being from the gutter, and having to fight for food and this and that. That’s not my background. I come from a good middle class family. My parents raised me well. I’m from a good neighborhood. There was always food in my fridge. I never had to fight for that.

Ring: So why box then? Why go that route if it wasn’t out of necessity?

Day: Because I love boxing. I love the lifestyle of it. Is what people don’t understand is being a good fighter doesn’t depend on social economic status. Being a good fighter depends on what’s in your heart. So you either have it or you don’t. I’m Haitian. My parents come from Haiti. Everybody knows Haitians are good fighters. We’re the only country to rebel successfully against the people who enslaved us without any help from the outside world. So it’s in my nature and it’s in my heart to be a fighter.

Ring: Sparring a taller middleweight like Ryota Murata must help you prepare for the slightly taller Adames to some degree even though your training with Murata isn’t specifically for your matchup.

Day: This is fate just opening the doors for me. We didn’t plan any of this out. It just turned out we ended up here in Japan sparring Murata, who is a big, strong, right handed puncher with a lot of amateur experience, just like the guy we’re fighting.

Ring: Have you seen any footage on Adames?

Day: Plenty. I’ve been following him for a long time. He’s a top ranked fighter in my weight class. I know the whole 154 neighborhood in the top fifteen.

Honestly, Adames and I were supposed to fight a few months ago. Back in October they were talking about if we both won our next fights we were going to fight in January in a big Madison Square Garden show for the New York crowd. They took the easy way out. I’m not putting them down. They made it to the top five, good for them, but they took the easy way out by fighting stationary fighters and hittable fighters like Frank Galarza, guys who are washed up already. They avoided the tough fight with me.

I’m not going to say they ducked me but they prolonged [the time they’d have before fighting me] and said “Why fight Pat Day when we can fight Frank Galarza or these other no-names?”

Ring: You were last in action in February while Adames was last seen in April. Are you considered fresher or is he considered sharper by having just fought?

I know [Adames] has a weight issue. His trainer Joel Diaz says he comes into camp 30 pounds over weight. So that’s his problem not mine.