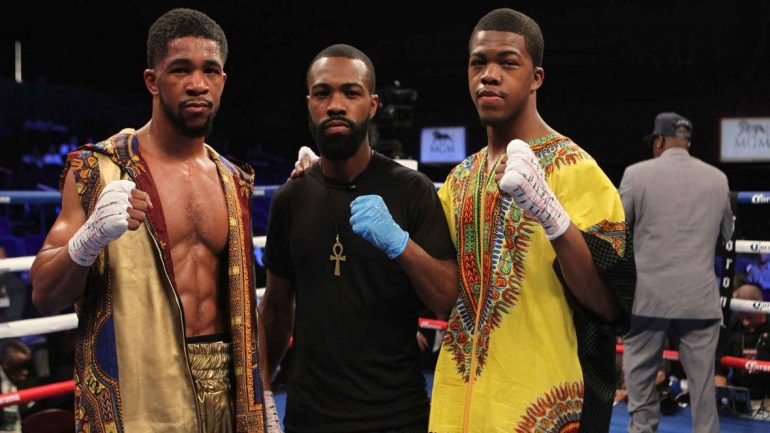 Gary Antuanne Russell (right) and Gary Antonio Russell were in action before older brother, Gary Jr., defended his WBC featherweight title on May 18 at Barclays Center.
18
May
by Vladimir Lik

BROOKLYN, New York – The youngest of the fightin’ Russell brothers, Gary Antuanne Russell, continued his knockout streak to begin his professional career, improving to 9-0, 9 KOs by stopping Marcos Mojica in the fourth round. The official time of the stoppage was 2:13.

The 22-year-old Russell, who had the privilege of having his older brother and world champion Gary Jr. work his corner ahead of his own bout later in the evening, was too much for Mojica (16-4-2, 12 KOs) who was caught with every combination Russell threw. Russell scored the first of two knockdowns in the fourth round when the southpaw connected with a lead right hook to the top of Mojica’s head followed by a sharp left hook. Mojica managed to beat the count but Russell went on the attack and hurt the fighter from Nicaragua again with a three-punch combination which dropped him again.

For the Capital Heights, Maryland native and 2016 U.S. Olympian this was his fourth appearance at Barclays Center, coming off impressive second round TKO of Roberto Almazan this past January.

Both men had moments in the bout where they could have exploited the weaknesses of the other but ultimately it was Alfonso who had more opportunities in the bout to hurt Kiladze. In the third and seventh rounds Alfonso found a home for his looping right hook but failed to follow up with anything meaningful which could have resulted in swaying the judges to his favor.

For the Republic of Georgia’s Kiladze who now resides in Los Angeles, he snaps a three-fight losing streak which saw him get thoroughly whupped by Joe Joyce, Michael Hunter and Adam Kownacki respectively. Hoping to get one more big fight, the 33-year-old Kiladze landed multiple shots on Alfonso but none with any resounding power to hurt the 6’4’’ former Cuban Olympian.

In what was his most complete performance as a professional, the 2016 Hatian Olympian showed off precise combinations and patience as he hurt Munera several times and took his time knowing it’s only a matter of time before the Colombian fighter will call it quits. Hitchins almost accomplished this in the opening round a big left hook caught Munera off balance and sent him into the ropes with wobbly legs. Hitchins pressed on but ran out of time to get him out of there.

In the third round, the 21-year-old Hitchins landed a clean left to the body dropping Munera. While Munera was able to beat the count his body language suggested that perhaps he had enough which is exactly what his corner was thinking and they stopped the bout after the third round ended. This was the eighth appearance at Barclays Center for Hitchins since signing with Mayweather Promotions following the 2016 Summer Olympics in Rio where he represented his Parents’ home country of Haiti.

Mayweather Promotions prospect Dylan Price improved to 8-0, 6 KOs with a fifth-round TKO victory over Manual Manzo (4-7-2, 2 KOs). The official time of the stoppage was 1:34 of the round.

The 20-year-old Price continues to mature as he shook off his recent no decision against Pedro Antonio Gonzalez in January to put on a dazzling performance of speed and timing, which hurt Manzo several times in the bout. Price picked up a few defensive tricks from his favorite fighter and promoter Floyd Mayweather. Price was able to connect with searing combinations and then evade any and all punched from Manzo. After Manzo would swing and miss, Price would land another 1-2 punch combination for good measure.

It became target practice by the fifth round of the scheduled sixth round bout and the ringside physician to jump up on the apron and instruct the referee to end the bout. This was the fifth appearance at Barclays Center for the amateur standout who was once named the most outstanding boxer of the 2013 junior Olympic nationals.

The bout was originally scheduled for eight rounds but was stopped in the sixth when an accidental clash of heads sent Hernandez down to the canvas holding his forehead In pain. After the ringside physician examined the fighter from Tijuana it was determined he would not be able to continue. Prior to the headbutt Russell was in complete control fighting comfortably on the inside willing to allow Hernandez to land one shot so that he may land three of his own.

The 26-year-old Russell had good moments throughout the bout including the third and fourth rounds where his stinging combinations almost got Hernandez out of there. This marked Russell’s second consecutive appearance at Barclays Center. This past January Russell scored a sixth-round TKO victory over Jose Maria Cardenas.

In the opening bout of the evening Kenny Robles (6-1, 3 KOs) scored a fifth-round TKO victory over Roy McGill (6-3, 3 KOs). The official time of the stoppage was 1:43 of the fifth round. Making his fifth appearance at Barclays Center, Robles brought the fight to McGill and pressured him enough get McGill to open up where the Staten Island, NY native can tag McGill without getting caught with anything in return. Robles landed a clean left hook which sent McGill into the ropes where he would stay for good. Seizing an opportunity to bring on relentless pressure, Robles jumped on the fighter from Harrisburg, PA and landed a succession of five unanswered shots prompting referee Harvey Dock to stop the bout. Robles, a 2016 New York City Golden Gloves Champion, has now won four in a row since suffering a majority decision loss in only his third pro bout.