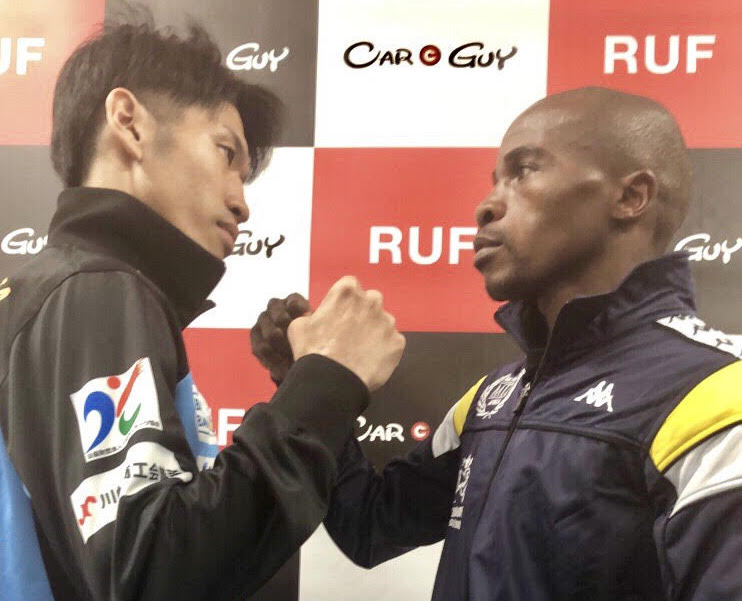 The king of the flyweights is taking his eleven year undefeated streak to the legendary confines of Korakuen Hall, Monday night in Tokyo.

Moruti Mthalane (37-2, 25 knockouts) will defend his IBF title against mandatory challenger Masayuki Kuroda (30-7-3, 16 KOs). For Mthalane, it will be his second straight fight against a Japanese fighter but his first inside Japan itself.

Mthalane comfortably made weight Sunday, coming in at 111.7 pounds with the taller challenger slightly lighter at 111.5 pounds. The two got their first look at each other yesterday at their medical evaluations, both all smiles and feeling confident, while excited and ready for fight night. For the challenger it could be his last chance at glory while the flip side sees Mthalane positioning himself for what he hopes will be a unification against champion newbie Charlie Edwards, who says he too wants a unification, though is fighting along a different schedule that would suggest otherwise.

We last saw Moruti Mthalane in action on New Year’s Eve when he dominated a younger, more inexperienced Masahiro Sakamoto who begged for a title shot but quickly found himself in over his head. The win came on the heels of another impressive performance five months prior to the Sakamoto defense, which allowed Mthalane to recapture his title that he briefly was forced to vacate due to inactivity. Now back in the swing of things and on an active schedule, the champ is dialed in and ready for war.

Just before he refueled with a massive plate of spaghetti from a nearby Denny’s, Mthalane spoke briefly on the record after this writer had the opportunity to watch him prepare over the last few days, watching him discover the Japanese substitute for Gatorade and seeing his trainer Colin Nathan wisely catch Kuroda’s coach trying to blend in amongst the Japanese media at an open workout.

Mthalane and Nathan echoed a similar tune: not giving up what they planned or how they would press Kuroda after they were repeatedly asked by local media. Nathan even instructed Mthalane to stay in the southpaw stance during the media workout once it was known that Kuroda’s trainer was in attendance.

Unfortunately for the Mthalane team, a synchronized strategy is not only the key to victory for tomorrow night, it’s also a healing tool as the group has recently been decreased by one. Just two months ago, Mthalane’s five month old daughter passed away and was laid to rest in South Africa. The fighter hasn’t gone about wanting to talk about his loss and has instead sought the confines of what he knows best: boxing.

RING: What was the response like back home after your last victory?

Moruti Mthalane: Everyone was happy and was glad to celebrate with me. We had a nice party.

RING: This is probably going to be Kuroda’s last chance at a world title. Do you anticipate he’ll empty his arsenal on you?

MM: He is ready and going to try his best. I respect that about him but he will not win tomorrow night.

RING: He says that your skills aren’t anything tricky and he’s not planning anything special for you.

MM: Hey, it’s his choice and I cannot decide how he trains. I can only control what I do and I’m ready for him.

RING: You said yesterday that you prefer fighting taller guys. Why is that?

MM: I have always fought taller guys since I was little. I’m used to it and ready for Kuroda, no matter his height.

RING: How did you react when you found out you’d be fighting in Tokyo for the first time?

MM: I was excited to learn that. It’s something I’ve wanted to do and now I’ll be able to fight in front of a great crowd and show them a good fight.

RING: Did you take note of the rather quiet nature of the Japanese crowd in your previous fight and do you think that makes it less of a home field advantage for your opponent?

MM: When I’m in the ring I’m completely focused so it doesn’t matter to me how the crowd reacts. I did notice that they’re very focused when they watch boxing.

RING: You said yesterday that you’re thinking of knocking Kuroda out. Kuroda has been in a lot of close fights and only been stopped by knockout once before. How do you envision getting the KO?

MM: Of course I’d like a knockout but I never plan for it. I’m ready to fight for twelve rounds.

RING: Where have you not fought yet that you’d like to?

RING: Charlie Edwards is from the U.K. Do you want to fight him?

MM: I heard him call me out after his last fight so I’ll return the call after mine. First, I want to defend my title.

Later this writer spoke with the head of MTK Africa and Moruti’s trainer Colin Nathan.

RING: Everyone is looking pretty confident the night before the fight. What’s your thought process right now?

Colin Nathan: Just obviously we’re very focused to get in the ring and perform. We’ve done the hard work. We’ve had a really good camp with great sparring. It’s time to represent South Africa and Africa boxing and to establish that Moriti is indeed one of the greatest fighters coming out of our country and our continent. We’re ready.