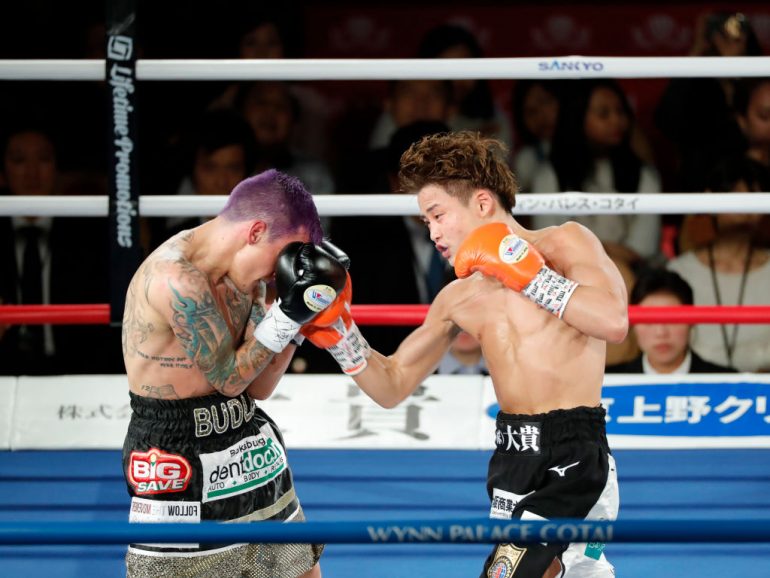 Hekkie Budler is caught with a right uppercut from challenger Hiroto Kyoguchi during their Ring/WBA 108-pound championship bout on Dec. 31, 2018, in Macau. Photo by Kevin Lee/Getty Images
06
May
by Nick Skok

After a well deserved six-month rest, Hiroto Kyoguchi makes his first defense of his Ring Magazine and WBA junior flyweight titles on the Ioka-Palicte undercard on June 19th from Chiba, Japan against Tanawat Nakook. Kyoguchi looks to improve his impressive 75% knockout ratio against the Thai challenger who is currently ranked eleventh by the WBA.

We last saw the young two-division champion in action on New Year’s Eve in Macau when he won his titles against Hekkie Budler in a tough outing. Initially allowing Budler to get work in through the first three stanzas, Kyoguchi (12-0, 9 knockouts) got Budler to quit in the tenth round after punishing him for seven consecutive rounds.

That fight was also on the Kazuto Ioka undercard and will again be broadcast on Tokyo Broadcast System (TBS). The duo is proving to be a nice one-two punch for the network.

Kyoguchi told local news outlet Nikkan Sport: “It’s been a half year since my last fight but I’ve been training the whole time. I always want to fight.”

He later told Sanspo.com that “there’s two Japanese champions in this division (the other being Ken Shiro) so my goal is a unification [with him].”

A fight with Shiro could happen down the line, perhaps on the coveted NYE time slot that is the biggest night for Japanese boxing. In the meantime, Kyoguchi will get some work in against Nakook (11-0, 5 KOs) who is stepping way up in opposition. His most recent fight was in February, when he stopped Crison Omayao (24-19-4, 8 KOs) in four rounds.

Expect Kyoguchi to go into this fight with tunnel vision without looking beyond the underdog. He told Sanspo: “I want to achieve a KO. I’ll defeat him for sure!”