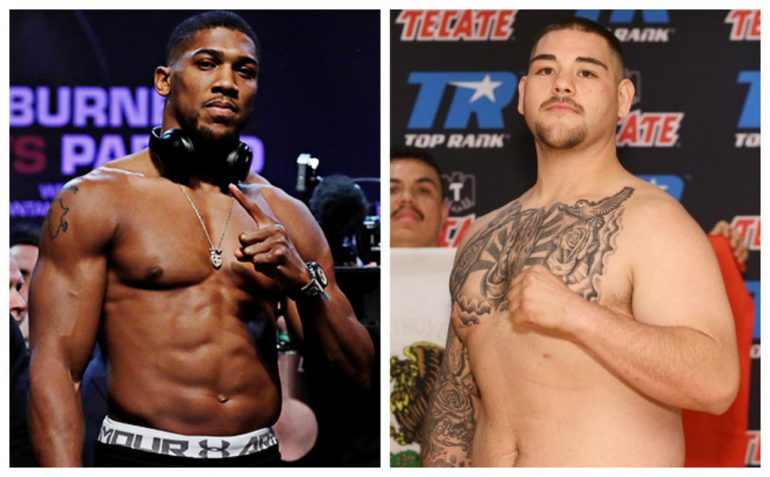 It was the worst kept secret in world boxing but it’s now official.

Britain’s Anthony Joshua will defend his IBF, WBA and WBO heavyweight titles against Andy Ruiz Jr. at Madison Square Garden in New York on June 1, live on DAZN in the U.S. and Sky Sports Box Office in the U.K.

Joshua, who is rated No. 1 by The Ring at heavyweight, was originally scheduled to face the unbeaten Jarrell Miller in his U.S. debut. However, that bout fell apart when Miller tested positive for three separate banned substances and had his licence revoked by the NYSAC.

This will be the second world title bout of Ruiz’s career. In December 2016, the Mexican-American slugger dropped a 12-round majority decision to Joseph Parker in a bout for the vacant WBO title.

In his most recent outing, just 11 days ago, the 29-year-old blasted his way through Alexander Dimitrenko in five rounds.

“The chills – I’m really excited for this fight,” said Ruiz (32-1, 21 knockouts). “There’s nervousness in me, but they’re happy nerves. This is my chance to make history. I want to be one of those greats like (Julio Cesar) Chavez, (Mike) Tyson, (Evander) Holyfield, Lennox Lewis. I want to be in that category. Thanks to God for everything that he put in me, I just can’t wait.

“I think being so tall, (Joshua) fights like a big robot. I think with my style, my speed, my movement, I don’t think he’s fought anybody like me. It’s going to be a whole different ball game. All the guys that he’s fought, they usually run around from him. I don’t think he’s good going back. I’m going to bring the pressure, the speed and the combinations to him.

“When I do pull out this win, everything is going to change. I’m going to bring the titles back to Mexico, it’s going to mean everything. I’m going to be able to change my whole family’s lives; my life and all my kids. It’s a win-win situation right now, but the main thing is to win the fight and make history.”

Despite Ruiz having limited time to prepare for the biggest fight of his life, this opponent switch has been far from ideal for Joshua. The Miller debacle would have been a serious distraction during training camp, but the unified champion seems eager to get back into the ring and is looking to make a statement.

“Ruiz is a different kind of challenge but one I embrace’” said Joshua (22-0, 21 KOs). “We have worked in the boxing gym week on week and whoever is put in front of me at Madison Square Garden on June 1 will be dispatched in style. The rent will be collected.”

“After a tricky week I am delighted to announce Andy Ruiz Jr. as AJ’s opponent for his U.S. debut at MSG on June 1,” said Matchroom promoter Eddie Hearn. “People talk about fighting AJ, some even have to fill their bodies with PEDs to try and beat him up, but very few genuine fighters step up and take the challenge.

“When we selected the opponent, I wanted someone with fire in their heart, someone who genuinely believed that they can win and become world heavyweight champion. Andy showed that desire.

“In my opinion, this is a tougher test than Jarrell Miller. Andy punches harder and is much faster – this is going to be a war. Andy brings Mexican heart, but he will meet the best heavyweight in the world on June head on at the Garden.”

Also on the card, Katie Taylor clashes with Delfine Persoon for the undisputed female lightweight championship, with more bouts to be announced shortly.