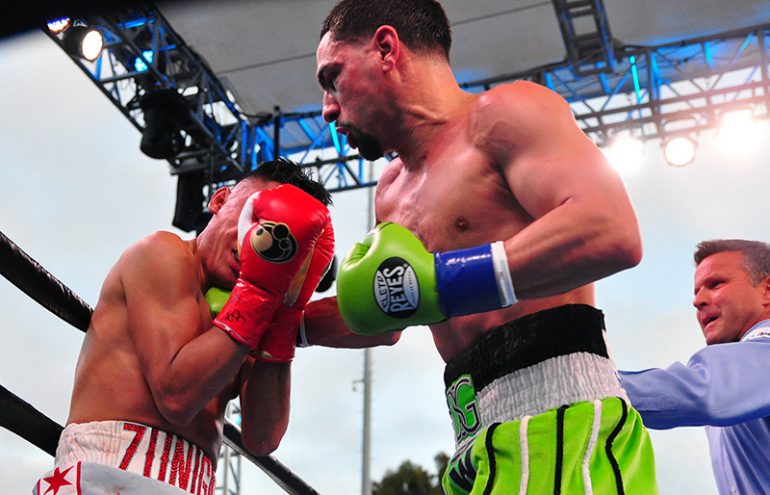 Danny Garcia announced that he's back with his brutal pounding of Adrian Granados, and he brought his vaunted left hook with him. Photo by German Villasenor
20
Apr
by Joseph Santoliquito

Danny Garcia has been angry for a while. The two-division titleholder has wanted to let the boxing world know he had more in him that needed to surface. A flicker of that fury showed when Garcia did something somewhat uncharacteristic by telling Adrian Granados after their weigh-in on Friday, “Welcome to the big league, little bitch.”

Then Garcia went out and showed just how “big league” he is by stomping on Granados from start to finish in an emphatic seventh-round TKO on Saturday in the main event of a PBC on Fox/Fox Deportes-televised card at the Dignity Health Sports Park in Carson, California.

Wearing fluorescent green trunks and gloves, Garcia (35-2, 21 knockouts) stopped Granados for the first time in the valiant Chicagoan’s pro career, knocking down the 29-year-old gatekeeper twice in the second and once in the fifth. 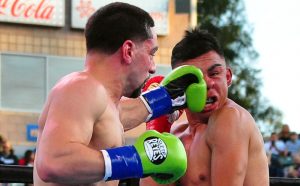 “I’ve said it before, when Danny Garcia is at his best, nobody can beat him,” Garcia said. “I had gotten a little comfortable in the past, but I put my 110 percent into this fight and when I do, I beat everyone. I had to make a statement and knock him out. I had to be the first man who stops him, and I got it done.

“I hope I didn’t scare Manny Pacquiao away. I’d love a rematch with Shawn Porter or Keith Thurman, or a fight with Errol Spence Jr. I’m back!”

In the first round, Garcia worked the body well and landed his trademark counter left hook. But Garcia was waiting for the left hook to make an impact. That came in the second, when a text book counter hook on Granados’ chin landed him on the seat of his trunks with 1:34 left in the round. Granados tried landing a left hook, making the dangerous mistake of doing it with his right hand down, leaving an open doorway for Garcia’s hook.

Garcia got a little wild after the knockdown, but within a minute left in the second, Garcia caused more trouble to Granados (20-7-2, 14 KOs) by plowing him a few more times against the ropes. As the second was winding down, Garcia barreled Granados over with an overhand right to the face with :16 left in the round.

With 2:28 left in the third, Garcia rocked Granados with another left hook. This time, Granados stood up to the big shots. Then Garcia chopped at the body and worked his way back up to Granados’ head.

With 2:07 left in the fifth, Garcia scored his third knockdown with a straight right to the chin, made possible with a body shot. As Granados got to his feet, referee Thomas Taylor told him “You better show me something, man.”

By the seventh, Taylor saw enough and ended it at 1:33 of the seventh.

If you didn’t know Andy Ruiz Jr. was a professional fighter, you might make the mistake and assume that he’s a bouncer at a corner pub. The 29-year-old from Imperial, California, is not exactly the body beautiful. He’s a stubby, 6-foot-2, 262-pound tatted-up slugger with no real body definition and often enters each fight as the smaller man.

That was the case again Saturday night in Carson.

There’s one other element to Ruiz Jr. that rings true: He’s a truth machine. If you don’t want to fight or just want to show up for a payday, Ruiz Jr. will bring that out. 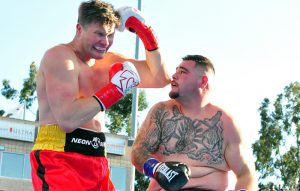 That’s what he did to towering 6-7, 259-pound Alexander Dimitrenko.

This had the makings of a comeback fight for Dimitrenko, who was making his first appearance in the ring in eight months, since he was stopped in nine by Bryant Jennings last August in Atlantic City.

Ruiz Jr. (32-1, 21 KOs) made easier work out of the disinterested Dimitrenko.

Ruiz Jr. plowed Dimitrenko with a left in the second, and Ruiz Jr. kept coming straight forward. In the third, Ruiz Jr. had Dimitrenko in serious trouble with a pair of big rights. In the fourth, Ruiz Jr. pounded away again at Dimitrenko, who was hesitant and appeared to have no game plan.

After the fifth, Dimitrenko’s corner mercifully stopped it.

“He started slowing down and I could see the face he made when I hit him with body shots,” Ruiz Jr. said. “I just stayed disciplined and focused. I couldn’t get too anxious. I just wanted to break him down until the tree fell down.

“We worked on slipping his right hand and coming back with my own. I missed with a few of them but I stayed busy. I focused on just getting the job done. For my next fight there’s somebody like me, a chubby exciting fighter I want. Adam Kownacki I’m ready, let’s do this.”