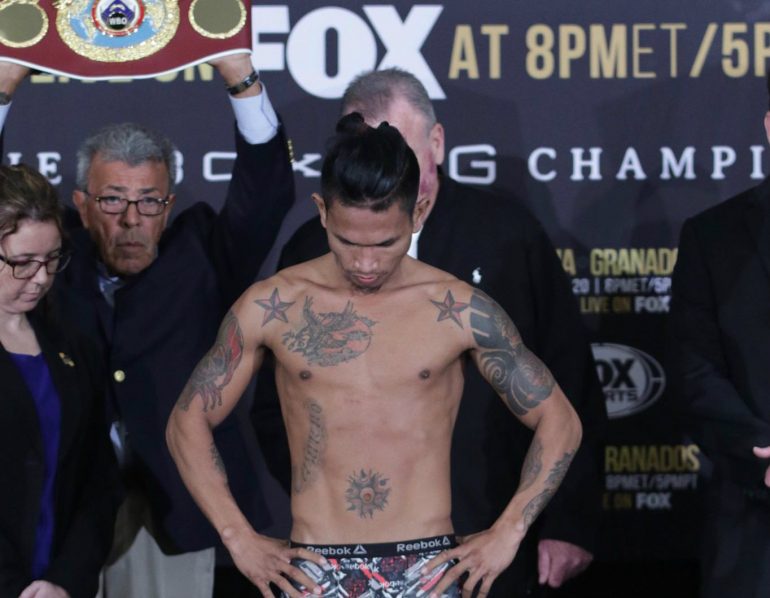 It isn’t ideal circumstances for a fighter to board a flight alone across the Pacific Ocean after his trainer was denied a visa. That’s the situation John Riel Casimero found himself in when he took off from Manila to Los Angeles a week before his fight this Saturday in Carson, California, without long-time trainer Jhun Agrabio.

Luckily for Casimero he was fighting in SoCal, where there is no shortage of cornermen who speak Tagalog and Visayan, and not somewhere like Indianapolis or Des Moines.

In LA, Casimero linked up with Rodel Mayol, the former WBC junior flyweight titleholder who used to train across town from him in Cebu City.

“I know him for a long time so we don’t have any problem as a trainer,” said Mayol.

Now together in LA for a week, Mayol will lead Casimero (26-4, 17 knockouts) into battle against Ricardo Espinoza (23-2, 20 KOs) on the Danny Garcia-Adrian Granados undercard at Dignity Health Sports Park. The fight will be contested for the interim WBO bantamweight title, keeping the winner in line for the belt currently held up in the World Boxing Super Series in the possession of Zolani Tete.

Since the unexpected loss to Jonas Sultan in 2017, Casimero has won two straight, including an impressive showing against Japanese fighter Kenya Yamashita in February, when he showed he still had considerable offensive weaponry at bantamweight with a vicious sixth round stoppage.

The SICK leaping uppercut by John Riel Casimero to finish off Kenya Yamashita last night in Manila. Scary scene as he collapsed to the canvas but he looked OK afterwards. Great show by ESPN 5 pic.twitter.com/8ePy2fMsga

Espinoza has won 13 straight since his last defeat two years ago and has stepped up his competition in recent fights, including a second round KO of unbeaten Yeison Vargas and a tenth round KO of former titleholder Ricardo Nunez last month.

“[Casimero] doesn’t have any problem in fighting against his opponent because he’s not so good,” said Mayol, who notes that Espinoza is a come forward brawler. “But he needs good stamina and a strong body to beat this guy.”

Agrabio, who had prepared Casimero at the Yraola Boxing Gym in Quezon City, said he hasn’t been in contact with Mayol but speaks regularly with Casimero to remind him of strategy.

“[Espinoza] punches fast and throws a lot and is strong but we studied him,” said Agrabio. Agrabio isn’t concerned about Espinoza’s perceived size advantage because he says Casimero had been sparring with featherweights and junior lightweights.

Mayol may be substituting, but he’s proven himself to be a fine trainer in his short time as a coach, working with Filipino fighters like Romero Duno and Aston Palicte to make them better-rounded boxers.

Despite having fought just about everywhere on planet Earth (on all continents but Antarctica and Australia), this will be Casimero’s first ever fight in the United States, and the tenth country he’s fought in overall.