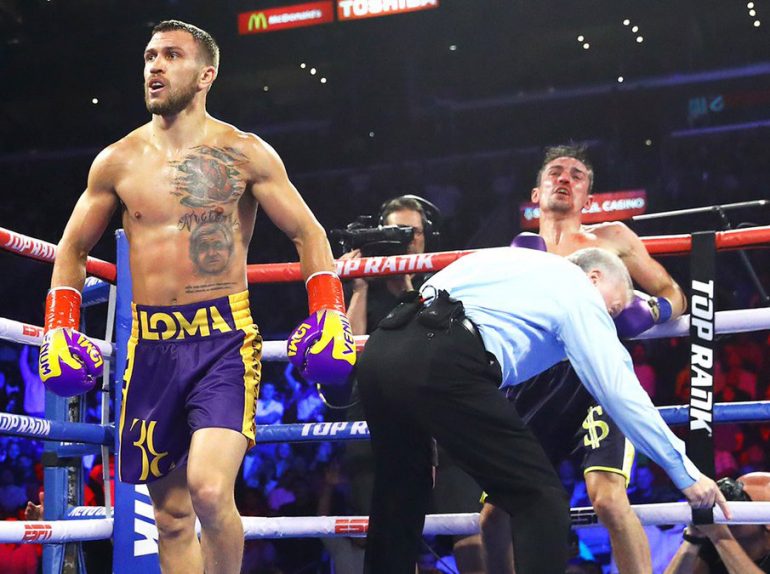 A vicious right hook that caught the usually game and durable English veteran toward the back of the head less than a minute into the round ended the main event, which was streamed live on the ESPN+ app.

Lomachenko (13-1, 10 KOs), a Ukrainian amateur legend who trains in Oxnard, California, almost finished Crolla off with a blinding barrage of power shots at the end of Round 3, but referee Jack Reiss stepped in to rule a technical knockdown because he determined that the ropes were the only thing holding the Manchester native up (well, duh, the poor guy was drowning in punches). That ruling confused everybody in the arena. Lomachenko jumped on the ropes of a neutral corner to celebrate his stoppage victory. Crolla (34-7-3, 13 KOs) started complaining about not being given enough of a chance. Lomachenko’s corner began to enter the ring. Fans went crazy.

Lomachenko scores the knockdown and thinks it was ruled a TKO. What do you think? #LomaCrolla pic.twitter.com/GVwAlYSLgs

All just a tad premature, but two minutes later, Lomachenko scored a cold KO and gave the large and vocal crowd something to cheer even more passionately about.

If Lomachenko’s tougher-than-expected fights against then-Ring/WBA champ Jorge Linares and WBO beltholder Jose Pedraza last year caused some to question his pound-for-pound king status (some think Top Rank stablemate and fellow three-division titleholder Terence Crawford deserves the No. 1 spot), his absolute blowout of Crolla – who went the distance twice with peak-form Linares – likely silenced most of his critics (who aren’t social media trolls).

Lomachenko had worried that Crolla would go into survival mode and make for an “uninteresting fight for American fans,” and he was correct for two and half tepid rounds before he stepped up his tempo in Round 3. Lomachenko, who had a 72-12 edge in total punches landed, according to CompuBox, was just as slippery as he was aggressive while closing the distance and working his jab and creative combinations.

Knowing that Crolla wasn’t in his fighter’s class and wouldn’t make for much of a fight, Arum told the media to tell their readers and followers that watching Lomachenko was like witnessing Picasso paint during Wednesday’s final press conference, which prompted some to quip, “Who wants to watch paint dry?”

The answer is 10,000 in Los Angeles, on a Friday. It was a surprisingly good turnout (equal to the crowd number he pulled in with Linares at Madison Square Garden last May), and one that included the glitterati of Tinseltown.

The plan is for Lomachenko to return to the ring in late summer, against IBF titleholder Richard Commey (who he was originally scheduled to face on April 12). If victorious against the hard-punching Ghanaian standout, Lomachenko would be one world title shy of his goal of becoming the first undisputed lightweight champion since the great Pernell Whitaker.

Garcia’s part of Al Haymon’s Premiere Boxing Champions organization, which does business with FOX and Showtime, plus he’s got bad history with Arum’s Top Rank company, which complicates potential negotiations, but a showdown with Lomachenko would draw a lot more than 10,000 fans to any Los Angeles-area arena (or stadium) that would have the honor of hosting it.