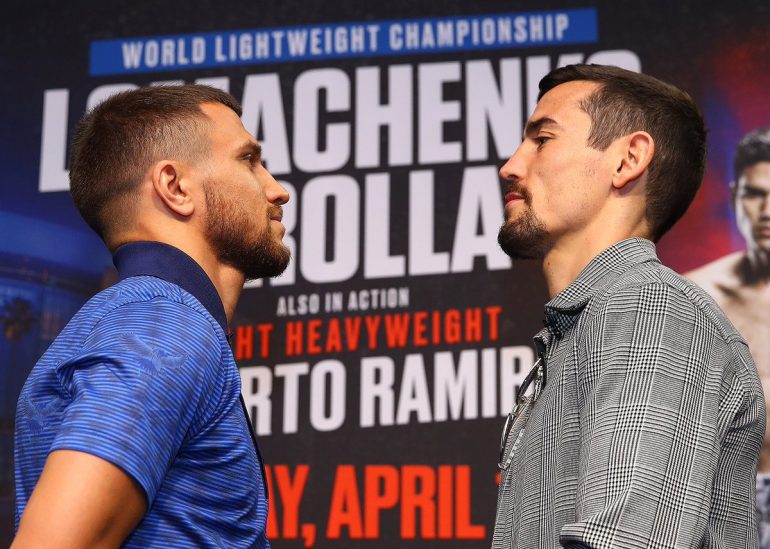 LOS ANGELES – Ring Magazine/WBA/WBO lightweight champ Vasiliy Lomachenko had hoped to continue his quest to unify all the major 135-pound titles by facing newly crowned IBF beltholder Richard Commey on April 12, but an injury to the Ghanaian standout’s right hand scuttled those plans, at least temporarily.

English veteran Anthony Crolla, the mandatory challenger for Lomachenko’s WBA title, stepped in as a credible substitute to save the ESPN+ date at Staples Center, but the pound-for-pound king is not enthused about the switch in opponents.

Crolla (34-6-3, 13 KOs), a former WBA beltholder who dropped two decisions to then-Ring champ Jorge Linares in 2016 and 2017, is as game and battle-tested as prize fighters come, but Lomachenko believes the high-guard “shell” the Manchester native fights out of could make for a monotonous fight.

“His style is very, very defensive,” the Ukrainian southpaw told Marcos Villegas of Fight Hub TV following Wednesday’s final press conference. “I think, for American fans, it will be not very interesting.

“I have my strategy (to deal with it) but it will be, for me, a little bit hard because every round I will need to find the key for his defense.” 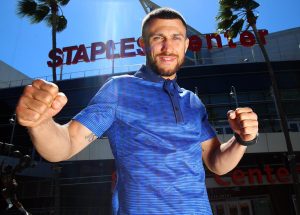 Loma wants to put on a show at Staples Center. Photo by Mikey Williams

Crolla, who was competitive with Linares in their first bout, has only been stopped once in 43 professional bouts (by Derry Matthews back in 2012), so Lomachenko is envisioning a long night on Friday. He hopes their main event won’t be a let down for Southern Californian fans, most of whom will be there to get a live look at the fighter that his promoter Bob Arum is comparing to Picasso.

Despite his concerns about entertainment value, Lomachenko says he accepts the title defense against Crolla.

“It’s part of the boxing life,” he said. “I understand this. My first choice was unavailable. Crolla is my mandatory, that’s why I took this fight.

Lomachenko, who won titles at featherweight and junior lightweight before stepping up to the 135-pound division last year where he defeated Linares and Jose Pedraza to unify WBA and WBO belts, adds that he didn’t lack any motivation during his training camp for Friday’s mandatory defense.

“I train for my place in boxing history,” he said. “I don’t train for one fight, or my next fight.”

However, “what’s next” occupies the minds of most fans and members of the media that can’t help asking Lomachenko about potential rival Mikey Garcia, who was soundly defeated by IBF welterweight titleholder Errol Spence Jr. last month but remains an elite lightweight and the holder of the WBC 135-pound strap.

“I’m very close to my dream, just two more belts,” he said. “I don’t want to run behind a train, but my next fight may be with Commey.

(Arum says the plan is to stage that unification bout this summer.)

“What about Mikey? It depends on him. Can he come back down to 135? He’s still 135 world champion but cutting weight to 135 is going to be more 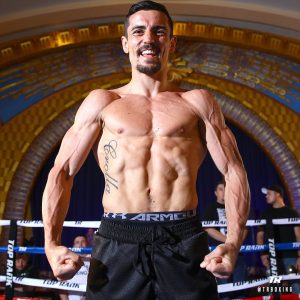 difficult for him now, I think, so we’ll see.

“But (what I want) doesn’t’ matter. If he (vacates) his belt, some contender (will win it) and in the future we can organize (a unification) with the future champion.”

For now, Lomachenko’s focus is on Crolla, who reminded him that he’s probably reached his ceiling with the 135-pound division.

“Did you see the size difference with Anthony Crolla when we stood side by side?” he asked.

In that case, bring on Crolla and Commey, top 130-pound titleholders like Gervonta Davis and Miguel Berchelt, young guns like Teofimo Lopez and Devin Haney, and maybe, just maybe, Mikey.