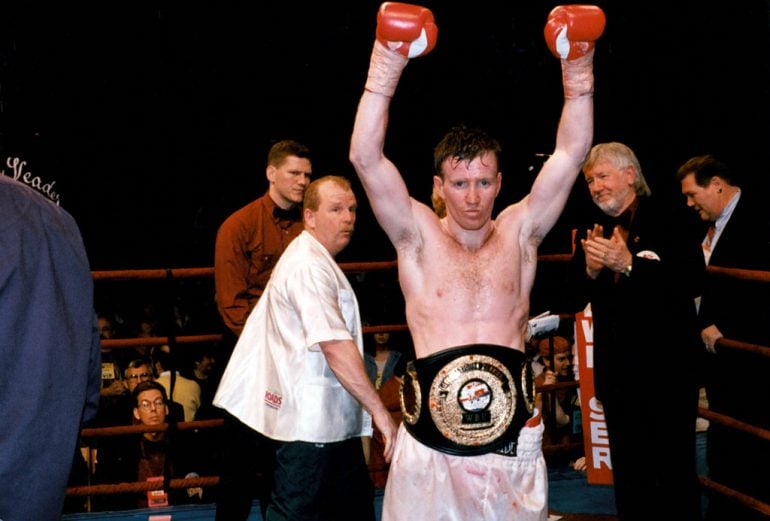 Photo from The Ring Archive
01
Apr
by Anson Wainwright

“Irish” Micky Ward was a blood and guts warrior who thrilled audiences with his fan-friendly style long before he gained cult status in the early 2000s for his classic trilogy with friendly rival Arturo Gatti.

Ward was born in the working-class industrial town of Lowell, Massachusetts on Oct. 4, 1965. As a youngster he played various sports but was drawn to boxing as a six-year-old when he watched half-brother Dicky Eklund box at the Golden Gloves.

After taking up the sport himself, Ward won three New England Golden Gloves titles and exited the unpaid ranks with a record of 40-10 (approximate) before turning professional in 1985.

The blue-collar fighter won his first 14 bouts before suffering his first setback to Edwin Curet (SD 10). From there Ward’s form became patchy and persistent hand injuries were a factor in a string of disappointing defeats. In 1991 he stepped away from the sport with a middling record of 21-7.

“I felt like I couldn’t get a break so I got away from boxing,” Ward told The Ring. “But I knew that I had a lot more left and didn’t want to go out that way.

“I came back because I wanted to and did it on my terms and that’s why I succeeded.”

Ward returned in 1994 and shook off the ring rust before taking on unbeaten contender Louis Veader. Trailing on the scorecards, the famed body-puncher scored a rousing ninth-round stoppage win that proved a turning point in his hard-luck career.

After besting Veader in a rematch, Ward secured a fight against IBF 140-pound titleholder Vince Phillips. The challenge proved too much for him and he was stopped – for the only time in his near 20-year career – on cuts in three rounds. 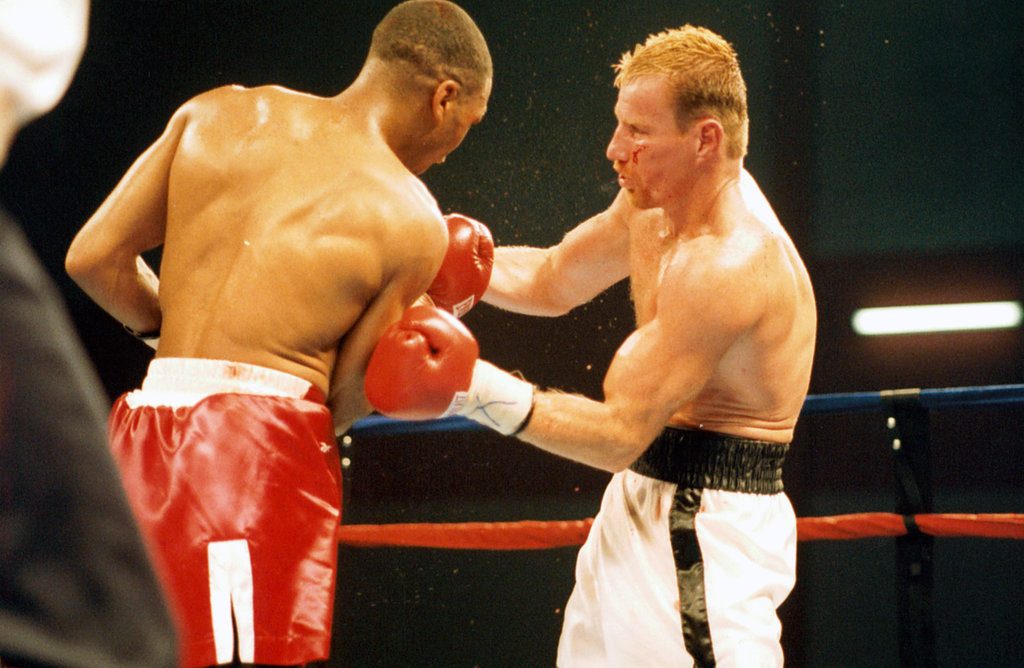 Ward’s money punch was the left hook to the body, seen here against Reggie Green. Photo from The Ring Archive

In May 2002 the curtain rose on the Ward-Gatti trilogy and the pair would become inextricably linked. Ward won the first fight but lost the second and third.

“I couldn’t have had a better partner,” Ward said of the man he shared 30 rounds with. “Our styles were perfect for each other.

“The first fight, he fought my fight. In the second fight, he stayed on his legs. I knew the first fight was special but it didn’t really hit me until after the third fight. I didn’t know it would be so popular, but people are still talking about it.”

With nothing left to achieve Ward retired with a record of 38-13, 27 KOs. He remained involved in boxing and even trained Gatti for a short period of time.

“I was honored to be in the ring with Arturo,” he said proudly. “I fought him three times, walked him into the ring, trained him and he was a great friend.” 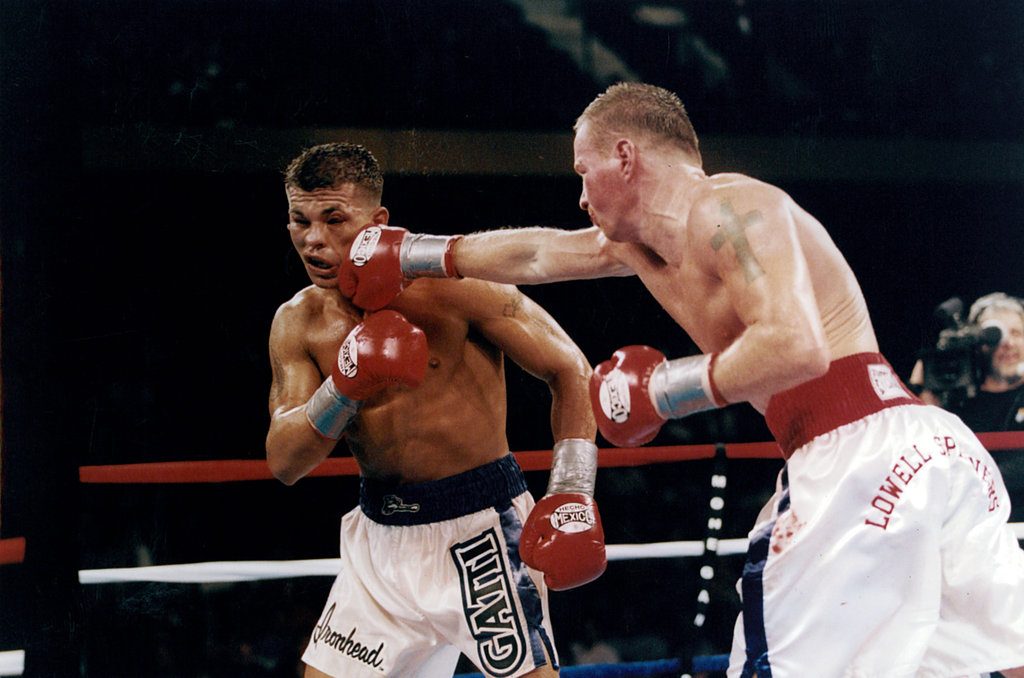 Ward (right) and Gatti battle it out in the first and best fight of their epic trilogy. Photo from The Ring Archive

Ward, now 53, is married and has a daughter. He regularly attends amateur and professional shows in New England. He also makes appearances in local advertisements and commercials.

BEST JAB
Zab Judah: Zab had a good, stiff jab and because he was a lefty it was awkward for me and tough to hit him. Charles Murray had a great jab too.

BEST DEFENSE
Charles Murray: I had trouble hitting him because he was tall, long and had a great defense. Harold Brazier was very good defensively and good offensively as well. He beat Roger Mayweather for the world title, but they robbed him.

FASTEST HANDS
Judah: Again, Zab Judah. He was always fast but at 19, when I fought him, he was exceptionally fast. Charles Murray a close second.

BEST FOOTWORK
Arturo Gatti: I wasn’t looking at their feet (laughs). Arturo Gatti, when he was moving, had the best footwork. He knew how to work the whole ring. A lot of times he stood and banged, but when he was on his toes and moving around, he had great footwork because his legs were so strong.

BEST CHIN
Gatti: Definitely Arturo Gatti. I put him down twice, once to the head. He was just so tough. Emanuel Augustus had a great chin too. He could hit hard and was the most awkward guy to fight.

SMARTEST
Brazier: I have to go back to when I was younger. Harold Brazier was a veteran, probably 35 (he was 34) when we fought, but it was like fighting a 25-year-old. He could really fight, and he was so smart in the ring. Arturo and Zab were smart too.

STRONGEST
Gatti: I fought a lot of guys who were strong but if I had to pick one – Arturo. He had a good left hook. Arturo put everything into his punches, never worried about getting hit back. He didn’t care.

BEST PUNCHER
Gatti: Arturo could really punch. I did fight a lot of guys earlier in my career who could punch, but they never went anywhere.

BOXING SKILLS
Judah: As he got older, he stood and fought more. He moved (up) in weight, but between 19 and 21, his skills were very, very good. He had some pop too. Arturo had good skills when he boxed.

BEST OVERALL
Judah: So tough. I can’t pick between Arturo and Zab. Arturo was fast, punched hard and was good defensively when he wanted to be. Zab had crazy speed and he could punch. If I had to pick, I’d go Zab because of his speed. Arturo was fast but not as fast as Zab.