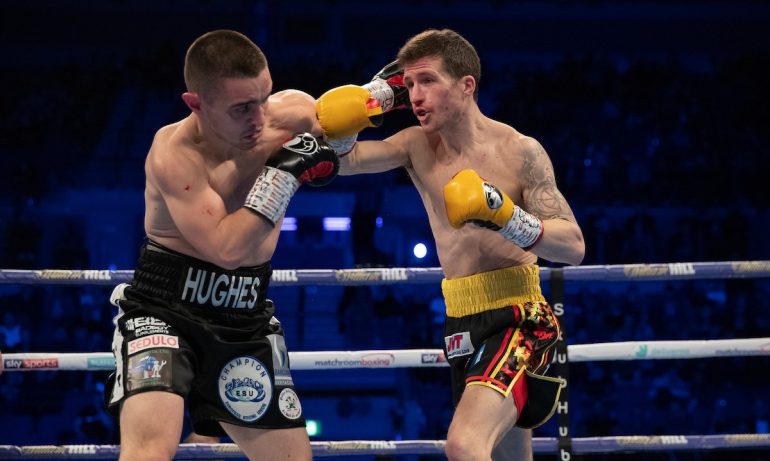 In an all British affair, Robbie Davies Jr. added the European junior welterweight title to his Lonsdale belt by scoring a 12-round unanimous decision over Joe Hughes at the Echo Arena in Liverpool, England, on Saturday. The official scores were 118-110, 115-113 and 115-114.

The 118-110 card handed in by Terry O’Connor seemed harsh as the action was evenly contested from beginning to end. Neither fighter was seriously hurt at any point, although blood poured from Davies’ nose throughout and his right eye was closed by the end of the fight.

“I just grounded it out like you wouldn’t believe,” said Davies in his post-fight interview with Sky Sports in the U.K. “Joe Hughes, what a competitor. I knew he was good, but when you’re in there with him, he’s like a pit bull.

“Hopefully I can push on for the rest of the year. I honestly don’t think anyone can beat me domestically. I think I’ve earned my merits tonight in Liverpool and hopefully everyone gets behind me now.”

The early rounds were contested at long range and ironically it was the smaller fighter, Hughes, who probably got the best of it. Davies, an adept switch-hitter, needed a change and drifted inside in the fifth to score effectively with body shots and uppercuts.

By the eighth the distance had again increased between the two and the ebb and flow was constant. The rounds were very difficult to score as the pair were so evenly matched. Whenever Hughes (17-4-1, 7 KOs) took control, he was put in his place by Davies and vice versa.

Sensing the last round could decide the outcome, both men swung from their heels in the final minute. Again, as had been the case throughout, it was difficult to separate them, but it’s Davies who moves forward to bigger things.