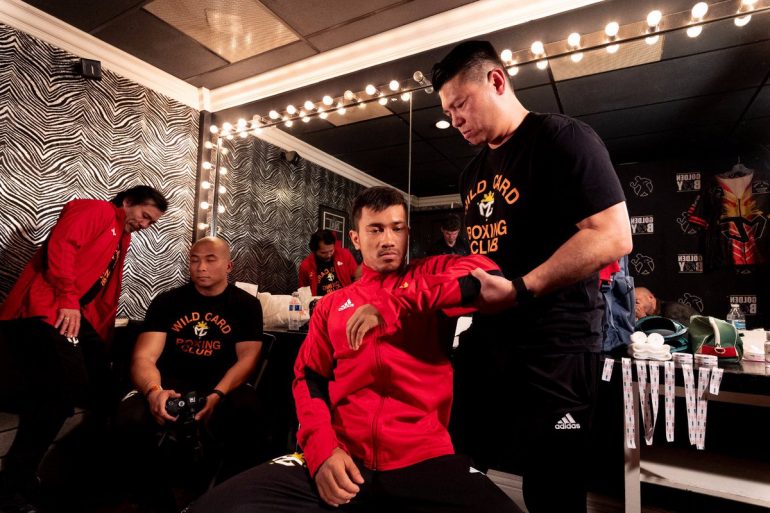 Juan Rodriguez pulled off a significant upset Thursday night, stopping lightweight contender Mercito Gesta in round nine at The Avalon in Hollywood, California.

Gesta, who closed as a 13 to 1 favorite, had not fought since a majority-decision victory over Robert Manzanarez on June 14.

Rodriguez, who resides in Puebla, Mexico, last fought in June of 2017, when he lost by unanimous decision to junior welterweight contender Pedro Campa.

Rodriguez was the aggressor from the opening bell, forcing Gesta to fight off his back foot. With each passing round, Rodriguez landed counter and lead left crosses to the head of Gesta.

Gesta did momentarily stun Rodriguez with a right hook to the head towards the end of the fourth round. Gesta did not follow up during the next round, where he looked complacent and lacked a sense of urgency.

“I felt it was a matter of time (before I would stop Gesta),” said Rodriguez after the fight. “I was connecting to the body. I felt he was going to quit. He stopped throwing punches.”

Gesta did have a decent ninth round, outboxing Rodriguez. With less than a minute left in the round, Rodriguez contented with a left hand to the jaw. Gesta was sent reeling across the ring as Rodriguez attempted to follow up. A barrage of punches from Rodriguez against Gesta prompted referee Zachary Young to stop the fight at 2:55.

The 31-year-old Gesta, who twice challenged for a world title belt, most recently against then-WBA titleholder Jorge Linares on Jan. 27 of last year, drops to 32-3-2, 17 KOs.

Within the opening minute of the first round, Kerobyan had to deal with a nasty cut over his right eye from an accidental clash of heads with Cobbs.

The southpaw Cobbs threw and landed an array of combinations to the head of Kerobyan. With each passing round, Kerobyan had to deal with blood dripping out of the cut and a significant bruise below his right eye.

Sensing he was down in the fight, Kerobyan increased his punch output and closed the distance between the two fighters. Kerobyan threw punches, but Cobbs made him miss and countered with several left hands.

Kerobyan and Cobbs unloaded with several punches in the final round. With about a minute left in the round, a right hand from Kerobyan immediately bruised Cobbs’ right eye, but Cobbs was able to make it to the final bell.

“He’s a phenomenal fighter,” said Cobbs, who is originally from Philadelphia and now resides in Las Vegas. “He may not have won (tonight), but I could definitely see him as a (future) world champion.”

“The fight went how I thought it would go. I didn’t expect him to have so much heart. Anytime I landed, I thought he would quit.”

“The vision bothered me because of the blood that tricked down from the cut,” said Kerobyan, who is originally from Armenia and now resides in nearby North Hollywood. “I felt I hurt him a few times. I’m pretty sure I gave it my all tonight.”

In a crossroads clash between featherweights, Manuel ‘Timo’ Avila and Jose Gonzalez fought to a majority-decision draw over eight rounds.

Avila (23-1-1, 8 KOs), who resides in Fairfield, California, was fighting for the first time since November of 2017. Avila looked solid from the opening bell, outboxing Gonzalez during the first half of the fight.

Gonzalez (23-7-1, 13 KOs) closed the distance between two fighters at the midway point of the fight. The Guadalajara, Mexico fighter was the aggressor, putting Avila on the defensive during numerous exchanges in the second half of the fight.

In an entertaining clash of heavyweights, unbeaten James Wilson and veteran Miguel Cubos fought to a majority decision draw.

Junior welterweight David Mijares of nearby Pasadena notched a one-sided victory over Puerto Rico’s Antonio Sanchez (6-6-2, 3 KOs). All three judges scored the bout 60-54 in favor of Mijares, who improves to 7-0, 3 KOs.