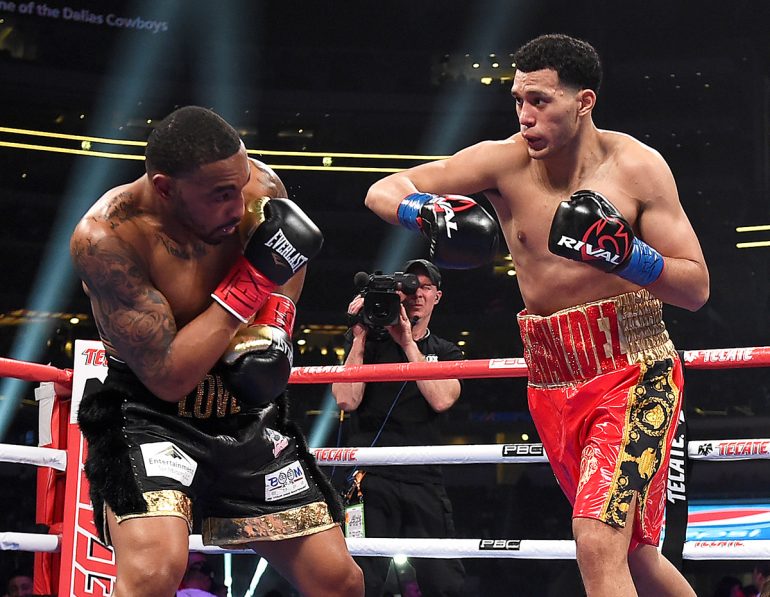 ARLINGTON, Texas – David Benavidez and J’Leon Love squared off in the co-main of the Errol Spence Jr.-Mikey Garcia FOX PPV card at AT&T Stadium. The former WBC super middleweight beltholder was returning from a 13-month layoff after testing positive for cocaine last year. Love was making his ring return after suffering a near shutout loss against former middleweight titlist Peter Quillin last August.

Both men got to work right away in the first round, each having their moments. Toward the end of the round Benavidez backed Love up several times with hard shots. A left-right-left combo just before the bell had the Detroit native back on his toes. It clearly made an impact and had the Mayweather Promotions fighter on his back foot for the remainder of the bout.

They fought a more measured pace to open the second, but it was Benavidez coming forward. Halfway through the round he caught Love on the ropes and landed a flush right hand that buckled his legs. The Phoenix native followed up with a barrage of punches that went unanswered by a crouched over Love, promoting referee Laurence Cole to stop the fight.

Some felt the stoppage was premature, but Love did not protest. Moments after the action ended Floyd Mayweather, Love’s promoter, was shown on the massive television screen above the ring. The crowd erupted in boos and jeers as a stunned Mayweather and Leonard Ellerbe looked upon their beaten fighter. The punch stats were completely one sided, particularly in the second round. Benavidez landed 61 of 117 total punches (52%), while Love landed just 19 of 113 (17%).

Benavidez improved to 21-0 (18 KOs) with the explosive victory and immediately called out Anthony Dirrell, who is currently in possession of the WBC 168-pound title he used to own.

“I saw Anthony Dirrell with the WBC belt,” he said. “He can’t call himself champion until he fights me. That’s my belt. I’m going to go get it. It’s mine.”

A fight between Benavidez and Dirrell, as well as current IBF titlist Caleb Plant, should be easy to make. They are all part of the Premier Boxing Champions (PBC) universe and seemingly eager to fight the best in their division. It’s up to management to make it happen.