Katie Taylor, out to annex third lightweight belt, has even bigger goals on horizon 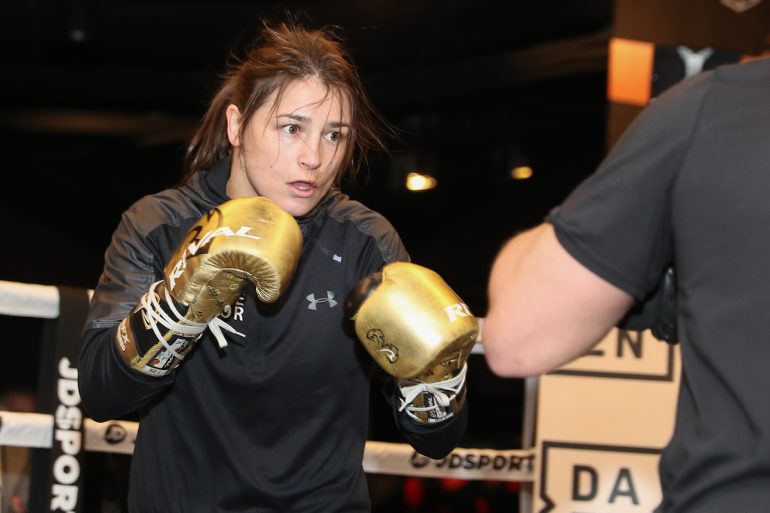 PHILADELPHIA — The initial impression is wrong. So, so, so wrong. Katie Taylor is a tiny dynamo, with a pleasant-sounding Irish accent and a dainty handshake – you’d assume the last thing on earth she would be is a prize fighter. She talks and you immediately see green.

She puts on boxing gloves, and the unfortunate person opposite her usually sees an assortment of different colors. The 5-foot-5 IBF/WBA lightweight champion has huge plans for 2019, starting with her showdown this Friday in a lightweight unification fight with WBO queen Rose Volante (14-0, 8 knockouts) at Temple University’s Liacouras Center being shown live on DAZN in the U.S. and on Sky Sports in Britain.

Taylor (12-0, 5 KOs) will be in the co-feature bout under IBF world super featherweight titlist Tevin Farmer’s third title defense against Jono Carroll, though to many, Taylor will be the prime attraction.

She’s brought with her a pile of Irish media, and everywhere she goes, it seems, cameras and reporters follow in her wake.

Taylor, 32, carries her celebrity very well. She’s big in Ireland. She would like to become bigger in the United States. As more see her fight, that won’t be a problem.

“This could potentially be the biggest year of my career,” Taylor said. “I have to get by Rose Volante first, then taking on the other champions. That could be on my mind this year as well. There is a huge fight out there against Amanda Serrano. My focus is to compete and fight against Volante, and then think of bigger plans after that. 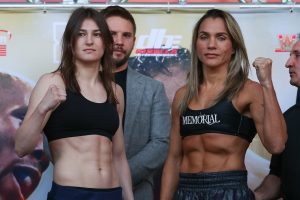 “But I can’t look past Volante. I know she’s an undefeated fighter, who’s a very strong fighter. She has a big right hand, and is a very dangerous fighter. I think this could be a very physical fight. It’s going to be a very exciting fight for the fans as well. I’m definitely ready and up for the challenge.

“She’s not as athletic as me, but she’s definitely very, very strong. Those kind of fighters are always in your face. I won’t overlook her. I prepare every fight the same way in my career. I know I’m expected to win this fight, but it could be a very tough fight.”

Taylor, who lives in Connecticut when she’s not in her native Bray, Ireland, is looking at fighting three more times this year, depending on how the schedule goes. This will be her fifth fight in the United States.

“I hope that I’m not losing my accent, don’t say that,” Taylor said, laughing. “This is the second time that I’ll be in Philadelphia. I was in Philadelphia when I was playing for the Irish national soccer team and we were playing the United States. I know I couldn’t play both soccer and box. I was around boxing my whole life, and I loved the fellowship aspect of soccer, but I felt I could excel more in boxing than soccer.

“Plus, I couldn’t take the risk of getting hurt playing soccer. It wasn’t a hard decision to leave soccer in favor of boxing.”

By the end of this year, who knows, maybe Taylor closes the year by becoming the undisputed lightweight champion by beating WBC 135-pound champ Delfine Persoon and tops the year by taking on pound-for-pound champ Cecilia Braekhus at a catchweight later in 2019.