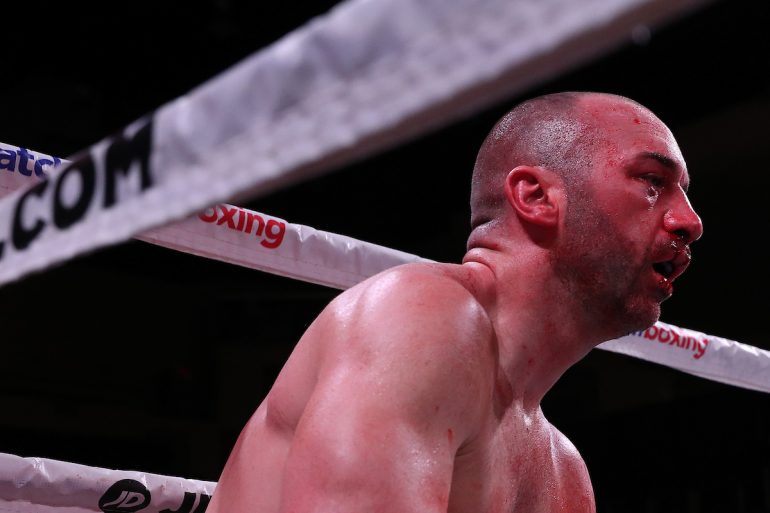 The walk to the dressing room after a finish like that one is harder.

It’s lonelier, it feels like a different level of weight upon a man who is 37 years old, and was just stopped in round three. A stoppage loss, after a loss in his last outing. Second stoppage loss in less than two years.

Sean Monaghan left the ring after Brit Callum Johnson (18-1, 13 knockouts) took him out at Turning Stone in Verona, N.Y., and his head was held high.

The chin was up, mostly…But the mind was in another zone.

What is next? Is this the last one?

Are the boxing gods trying to send me a message to hang up those mitts, and find another vocation?

Blood came forth in round one, and the flow worsened in the second. Johnson’s body work from the get go landed clean and looked like they hurt.

Seanie wouldn’t let anyone know that, but he couldn’t help it, his pride was immense… but pride can defend ego, but isn’t as good with keeping the chin unchecked… down he went in round two. A right hand buzzed him bad, sent him to the mat. Seanie got up, walked to continue combat, and then two left hooks,  and a right, and he went down again.

Trainer Joe Higgins told him he’d pull the plug if he saw much more punishment. “Whaddya want me to do? I’m gonna have to friggin’ stop it if ya don’t show me something.’ …Spit the blood outta yer mouth!”

You better hold if hurt, Higgins said to his proud and defiant warrior.

To the third…Seanie was getting backed up. On the ropes, he was getting basted, blood masked his visage. He looked 37, it must be said. Pride and internal fire are most meaningful, but the passage of time can nullify those traits. Maybe twenty shots were thrown, Seanie answered with one…and the ref hopped in. Game over. Maybe game, and set, and match.

So Seanie heard David Diamante say the other guys’ name…He looked to the mat…he looked into the crowd, his mind wandered. He looked pre-occupied. But of course, the classy sportsman gave props to the winner.

And then Seanie–and we know we are using his first name, it’s deliberate, because we feel like we know him, because you want to know him, he’s got that stout character and decency– walked to the dressing room, where more pondering would occur.

He soon sent a post out to his fans, letting them know he was alright:

I’m showering up in my hotel room now, very disappointed but physically ok. I don’t know what’s next for me Boxing wise…

All class from the Long islander, who Tweeted out this on Sunday afternoon:

Much respect to the man who beat me last night @CallumTheOne I’ve been in the ring over the years fighting and sparring with plenty of big punchers but Callum might have the Heaviest hands I’ve ever seen! Savage punching power. Respect and best wishes going forward champ ??

And more props…for the “Loser”…rather than sliding into a shell, he answered my queries on Sunday. I asked Seanie to tell me about the fight, from his perspective.

“I felt his power right away! He might be the hardest puncher I’ve ever been in with,” the boxer, who holds a 29-3 (17 KOs) mark, said. “I ducked down low in the first and he dropped me with a short little two piece. It was all a mess from there haha. Respect to him he’s a cool guy and a savage puncher! And I’ve been in the ring with plenty of hard punchers but this guy is extra!”

He assured me he feels OK. Then, the million dollar question–is this it? Will he fight on?

He pondered, he slept on it, he has looked in the mirror the morning after, and the bruising and closed cuts were silently weighing in…

And if so, full on props to a guy who repped the sport oh so well.

He showed what perseverance is all about, and shrank back from no challenge.

If this is it, thank you for your service to the sport, Seanie.