Erislandy Lara and Brian Castaño battle to an agreeable draw 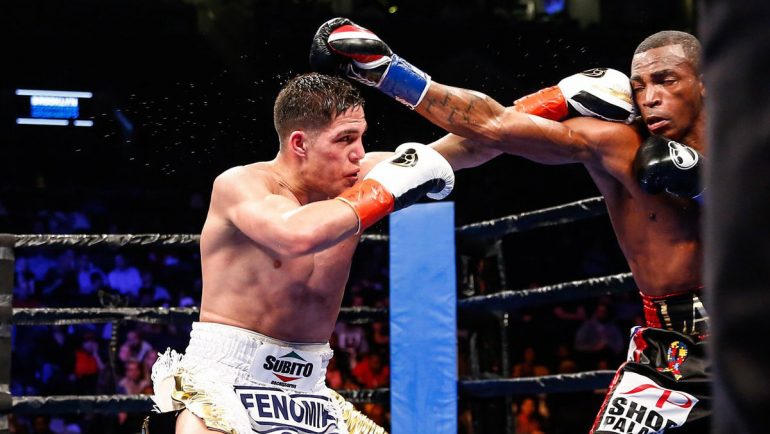 NEW YORK — The spring in the legs were gone. So was the head movement. So was the feinting and constant swirling that made Erislandy Lara hard to hit.

Maybe it was the 11-month layoff. Maybe it was just the fact that Jarrett Hurd beat the bounce out of his legs, and head, and his defensive swirls.

And young, vibrant Argentinian Brian Castaño was the benefactor.

Fighting before an announced crowd of 7,329 at Barclays Center on Showtime Championship Boxing Saturday night, Lara and Castano finished in a split-draw, which hardly anyone ringside seemed to have a problem with, after judge Kevin Morgan ruled for Castaño, 115-113, judge John McKaie had it 115-113 for Lara, and judge Julie Lederman had it 114-114.

Naturally, both fighters thought they had won.

“It was a great fight, but I saw myself winning eight rounds tonight,” Lara said. “My punches were much more effective. He did have pressure but I was dominating the pressure. I was definitely expecting that pressure because he waited a long time for this fight.

“If we have to fight him again, I’ll fight him. Hurd or Castaño. Anybody, I’ll have the rematch with both.”

Said Castaño, “It was a good fight. A clash of styles. I know I won the fight. I feel I was robbed. If he wants the rematch, I’ll give him the rematch.

“He’s an elusive boxer. I knew that, I prepared for that. I think it was a good fight but I won. I know I won. I landed more punches.

“I would give him the rematch if he wants. I can also go ahead and fight any other champion that wants to fight me. I’m ready for whoever they put in front of me. Hurd or anyone else.”

The duo combined to throw 1,688 punches. Castaño did land the greater number of power shots (181-103) and a 7-3-2 lead in the CompuBox round-by-round breakdown of total connects.

Countering that, Lara had greater success landing lefts down the middle (he led 34%-27% in power accuracy). 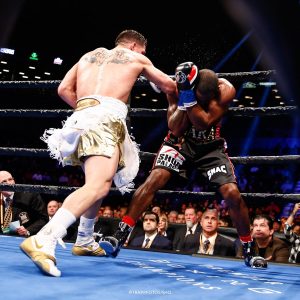 After a slow start, Castaño (15-0-1, 11 KOs) began establishing himself in the third round by crowding Lara. It was probably the first round he won. Castaño landed a solid right with Lara pinned against the ropes. Castaño kept coming forward in the fourth, and an uppercut caught Lara’s attention—again with Lara up against the ropes.

Swelling was also beginning to build under Lara’s left eye as the fifth began.

Lara’s sharp counter punching began surfacing in the fifth. But in the last 10 seconds of the fifth, Lara was trapped in a corner and absorbed a left hook to the body. Lara may have done enough work to win the fifth.

In the sixth, Lara began using his jab. He kept pushing forward into Lara. During a portion of the round, Lara put his arms out, inviting Castano to punch him.

It didn’t deter Castaño. He burrowed in and chopped Lara to the body, after six, you couldn’t help but feel Castaño’s confidence was growing with each passing round.

Halfway through, it was possible the fight was even.

By the seventh, Lara’s right eye was starting to swell. There seemed to be a greater sense of urgency from Lara in the seventh. But the former junior middleweight titlist could not keep the younger, more vibrant Argentinian off of him.

Castaño went back to the body attack in the eighth, chopping at Lara inside and it may have been what he needed to win the round. After eight, it appeared to be an even fight. 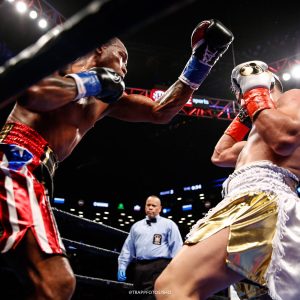 In the ninth, Lara landed a straight left with just over two minutes left in the round. With 1:40 left in the ninth, Castaño lunged at Lara and landed a left hook to the body. Castano bulled Lara into the ropes and hit a lot of Lara’s arms and shoulders.

But Castaño was also the more active fighter. Lara appeared content on leaning against the ropes and trying to catch everything he could.

For the first time in the fight, it was Lara backing up Castaño. In the last :30 of the round, Castano had closed the distance and the two exchanged in tight quarters. Both fighters landed effective shots—though Lara may have gotten the better of the inside work.

In the 11th, Lara landed the cleaner shots. Another big key was Lara used distance very well. When Castaño neared Lara, Lara made him pay. But in the last minute of the round, Castaño got through Lara’s defense and landed a few uppercuts inside.

Lara started the last round strong. He landed a straight left that cleaved Castano’s high guard. Castano absorbed a few more shots, before retaliating and boring into Lara.

Lara, bracing behind a high guard, took heavy shots against the ropes. It was, however, Lara that closed with a straight left to Castaño’s face as the final bell sounded—punctuated by the overwhelming cheer of the crowd.