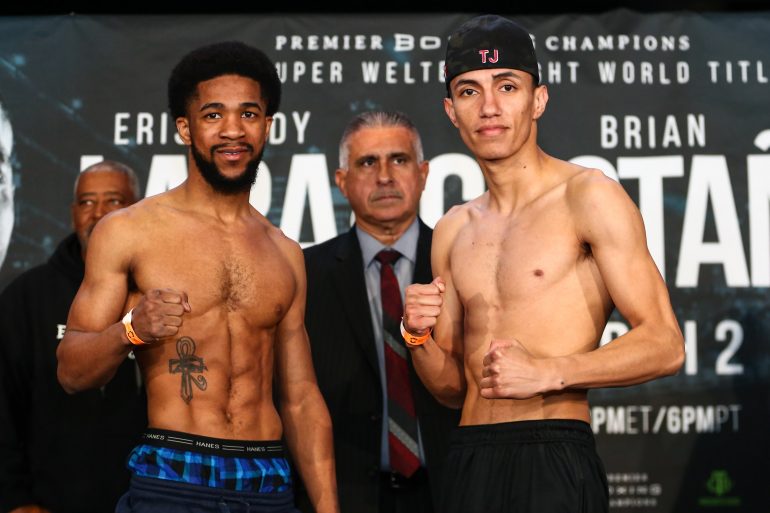 NEW YORK — Antonio Russell (13-0, 11 knockouts) defeated Jose Maria Cardenas (16-4, 13 KOs) by sixth round TKO on the Erislandy Lara-Brian Castano undercard at Barclays Center in Brooklyn, NY. The official time of the stoppage was 22 seconds of the sixth round.

The 26-year-old younger brother of world champion Gary Russell Jr. had Cardenas hurt multiple times in the bout. In the sixth round Russell sent Cardenas flying into the ropes with a big right hand. With Cardenas rendered defenseless, Russell unloaded five consecutive right hands until the ringside physician jumped on top step of the ring corner and motioned to referee Sean Clark to stop the bout. Russell has now stopped his last six opponents.

The Capital Heights, Maryland native looked sharp from the opening round when he floored the Mexican fighter with a perfectly placed right hook that almost knocked Cardenas out. The game Cardenas beat the count but couldn’t mount much of a defense after the knockdown. Russell used his speed and pin-point accuracy to touch Cardenas anytime he wanted to.

Russell is coming off two knockout victories in 2018 including a first round knockout off Nick Otieno last August in Minneapolis.

Making his first appearance as a cruiserweight the 33-year-old Rodriguez looked lethargic at times but still mustered to land freely on Williams who had virtually no ability to evade any of Rodriguez’s punches.

Rodriguez, who used to make Worcester, Massachusetts home, is now attempting to reinvent himself in a new weight class and recently moved to Stafford, Texas to jumpstart his career. Rodriguez was initially slated to face Andrzej Fonfara a week from tonight in California on the Shawn Porter-Yodenis Ugas card, but Fonfara withdrew from the bout and subsequently announced his retirement, placing Rodriguez on this card tonight.

Rodriguez had his best moment in the fourth round when he found a home for his right hand and had Williams hurt several times with referee Eddie Claudio leaning in closely to determine if he should step in, but Williams managed to survive the round. Rodriguez had another successful sequence in the fifth landing his right hand at will.

As Rodriguez started to fade in the later rounds Willams tried to mount a comeback and rallied late in the seventh round, sending Rodriguez back to the ropes. Williams tagged Rodriguez again in the eighth round but was unable to follow up with much else to hurt Rodrguez. Williams tried to finish the bout strong while Rodriguez hopeful he had done enough early on was just trying to get to the finish line. Rodriguez has now won three straight bouts since being stopped in the second round by Thomas Williams Jr. in 2016.

In junior lightweight action Cuban-born Leduan Barthelemy (14-0-1, 7 KOs) defeated Miguel Angel Aispuro (11-7-2, 7 KOs) by an eight-round unanimous decision. The official scores at ringside were 80-72 on two cards and 79-73 on the third.

Barthelemy finds a home for his right uppercut in round 6. #BarthelemyAispuro pic.twitter.com/fvxHfHbNMT

The younger brother of former Olympian Yan and two-division world champion Rances, Leduan found himself with a much easier opponent than his last appearance which was over two years ago when Barthelemy escaped with split decision-draw against then unbeaten Eduardo Ramirez. Barthelemy tried to shake off any ring rust in the first round as the 29-year-old who now lives and trains out of Las Vegas came out throwing combinations at a dizzying pace. Aispurro was outclassed from the start but managed to hang in there as long as Barthelemy allowed him to.

Brooklyn’s Richardson Hitchins (8-0, 4 KOs) scored a TKO victory over David Morales (13-10, 13 KOs) when Morales was unable to answer the bell for the fourth round. This marked the seventh appearance at Barclays Center for the 2016 Haitian Olympian and Mayweather Promotions fighter who just fought a few weeks ago in Las Vegas.

“It feels great to be home,” Hitchins said following the bout. “I went out to Vegas on a vacation, picked up a win then came home and got another win. I am calling out all the champions at 140 pounds.”

Hitchins dropped the overmatched Morales in the third round with consecutive overhand right hands that hurt the Nicaraguan fighter. Morales beat the count but meekly meandered back to his corner where it was decided he would not make it back out for the fourth round. The 21-year-old Hitchins continues to improve as he matures a professional and builds a following in his hometown.

Hitchins busted Morales’ face open in the second round with his speed and accuracy and worked diligently behind the long jab that helped the Brooklynite stay in control and keep the wild-swinging Morales at bay.

Making his second appearance at Barclays Center in as many months, Irby scored the bout’s lone knockdown in the first round by dropping Okoth with a straight right hand which connected clean. The Landover, Maryland native got off to a quick start hurting Okoth and making the Kenyan fighter miss with his own shots. In the second round Okoth landed a right to the body and forced Irby to fight off the ropes.

Irby roared back in the third round behind the stiff-right-handed jab to keep Okoth off balance while Irby pulled the momentum back in his direction. Irby used his 5’10’’ height as an advantage while he moved from side to side allowing the Kenyan fighter to tire out trying to reach him. In the sixth round an accidental clash of heads opened a cut over Irby’s right eye causing him to evade Okoth for the remainder of the round.

Irby is coming off a unanimous decision victory over Jonathan Figueroa last month at Barclay Center on the Keith Thurman-Josesito Lopez undercard.

In the opening bout of the evening Aaron Anderson (4-0, 3 KOs) defeated Chukka Willis (4-10, 2 KOs) by a four-round unanimous decision victory. The official scores at ringside were 40-36 on all three cards.

The 27-year-old Anderson used his jab to control the pace and never allowed gun-shy Willis to get close enough to land anything meaningful. In the third round the Baltimore-native easily landed body shots to open Willis up and as the overmatched Willis lowered his head Anderson measured and tagged Willis with an uppercut to send him back into the ropes. Following that exchange Willis perfectly content remaining on the outside and being peppered with jabs. This was the first bout in over two years for Anderson.