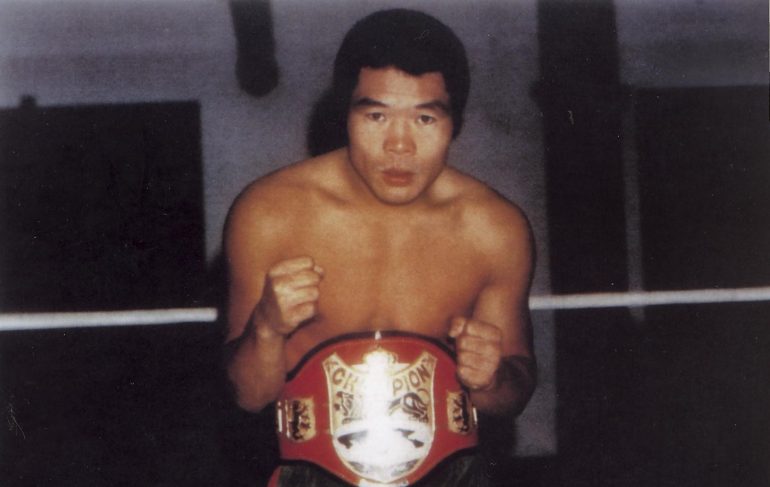 Japanese battler Guts Ishimatsu won a lightweight world title at the third time of asking and went on to make five successful defenses during the mid-70s.

Ishimatsu, original name Yuji Suzuki, was born in the city of Tochigi in central Japan on June 5, 1949. He grew up in the countryside in a poor family and was one of four children. Initially he wanted to be a professional baseball player, but his interest in boxing began when, as a 12-year-old, he watched countryman Fighting Harada.

“He was a hero of mine in my youth,” Ishimatsu told The Ring. “For me he was a Muhammad Ali for boxers all around the world.”

Ishimatsu never fought as an amateur but turned professional at 17 in the fall of 1966.

“As an amateur I could not earn money,” he said. “At that time I wanted to make money as soon as possible. I was not interested in boxing as an amateur.”

Early in his career Ishimatsu looked anything but a future world champion. Over the first three years the Japanese fighter went 12-5-4 (9 knockouts).

Ishimatsu quit in some fights and appeared to lack guts. It was at this point a friend made the suggestion that had huge ramifications for his career.

“My friend named me Guts Ishimatsu to inspire me to show more guts in fights,” disclosed the former champion. “Ishimatsu came from ‘Mori no Ishimatsu’, a famous professional gambler from the Edo period, who in Japanese culture is often romanticized as a chivalrous Robin Hood figure.”

Not wanting to dishonor the name, Ishimatsu morphed into a far more courageous boxer, winning four fights to set up his first world title opportunity. He traveled to Panama and took on the wonderfully skilled undisputed lightweight champion Ismael Laguna on June 6, 1970.

Although he gave a good account of himself, the challenger was no match for the slick Laguna who stopped him in 13 rounds.

Following that defeat Ishimatsu’s form again became patchy and he dropped decisions to former bantamweight kingpin Lionel Rose and three-time world title challenger Rene Barrientos. He also lost to Shinichi Kadota and future world title challenger Chang-Kil Lee before getting his career back on track by outpointing Kadota in a January 1972 rematch.

Joe Koizumi, the doyen of Japanese boxing, believes Ishimatsu overachieved in his career.

“He had a couple of contemporary rivals in Olympian Masataka Takayama and Orient champ Shinichi Kadota, people had expected much more from these two prospects than Ishimatsu,” said the 2008 Hall of Fame inductee.

“As Kadota’s OBF (Orient Boxing Federation, before the OPBF) challenger became unavailable, he thought Ishimatsu must be an easy opponent due to his previous KO win. Ishimatsu, however, upset world-rated Kadota to become the Orient champ, then changed himself and surpassed his talented rivals thereafter.”

The new OPBF champion made two defenses and was on a six-fight win streak when he was offered a second world title opportunity, again in Panama, this time against the great Roberto Duran.

The Japanese star put up a spirited effort before being stopped in 10 rounds, although he did bloody “Hands of Stone” early in the fight.

“In the first and second world title challenges, I felt the level of world champions and keenly felt the importance of body strength and physical capacity,” acknowledged Ishimatsu. “So I had many camps to exercise the body and consequently – and fortunately – I become a world champion. I felt very happy because I rebuilt my family home with the money from that fight.”

Ishimatsu retained the WBC title on five occasions, turning back the challenges of, among others, Gonzalez (KO 12 in rematch) and former undisputed champion Ken Buchanan (UD 15).

In May 1976, Ishimatsu traveled to Puerto Rico and lost his title to Esteban De Jesus by wide unanimous decision.

In one final world title attempt, Ishimatsu stepped up to face WBC  junior welterweight champion Saensak Muangsurin but was stopped in six by the Thai southpaw.

He walked away from boxing only to make an ill-advised comeback 14 months later. Ishimatsu lost on points to the undistinguished Yohi Arai before bringing the curtain down on a storied 15-year career. His final record was 31-14-6 (17 KOs).

Ishimatsu, now 69, is married and has three children and two grandchildren. He lives in Tokyo and is the chairman of Pro Boxing World Champions in Japan. Since retiring, he has appeared in several movies, including Empire of the Sun and Black Rain, as well as a host of Japanese films.

The ex-champion graciously took time to speak to The Ring about the best he faced in 10 key categories.

BEST JAB
KEN BUCHANAN: He was always able to keep appropriate stance and angles from me in order to throw his jabs effectively.

BEST DEFENSE
SAENSAK MUANGSURIN: He had long reach and it was difficult for me to land my punches on him.

FASTEST HANDS
BUCHANAN: His jab and straight right were the fastest I experienced. Ismael Laguna was fast of foot as he quickly moved away just after hitting, but his punches were visible. Duran’s hands were also fast, but I could see and react against his punches.

BEST FOOTWORK
ESTEBAN DE JESUS: He was good at keeping good stance from me in both offence and defense.

BEST CHIN
MUANGSURIN: Since he was a legitimate junior welterweight, he was physically much stronger than me. I landed some solid shots, but he shook them off due to his physical strength. Duran had a strong chin, but I sometimes scored with good shots and gave him some damage.

SMARTEST
ISMAEL LAGUNA: He was good at getting points by not chasing any opponent too far.

STRONGEST
ROBERTO DURAN: Duran’s physical power and stamina was beyond description. He always kept punching with his physical power so that he wore down all opponents with his abundant stamina. His opponents fell as they didn’t like to absorb more punishment incessantly. That’s the way of Duran’s knockout.

BEST PUNCHER
DURAN: Duran, Muangsurin and Gonzalez were all hard-punchers, but the quality of their punching power was different respectively: Duran; hard punches in succession, Muangsurin; hard single pinpoint punch, Gonzalez; very solid puncher, though I could fortunately defeat him twice.

BEST BOXING SKILLS
LAGUNA: He knew the importance of judgement of distance. He always kept his own distance of hitting without getting hit. He always moved away after hitting me to make himself an elusive target. Buchanan also kept his distance by continually jabbing. De Jesus was also skillful with his constant footwork and hit-and-run tactics. Muangsurin was a southpaw boxer and therefore it was difficult for me to fight with him.

BEST OVERALL
DURAN: He was a super champion and enormously excellent in every aspect. His strength, as I felt in fighting him, was chiefly based on his tremendous stamina. As he had exceptional physical power, he could overwhelm his opposition with his volume of punches and his hand-rotation speed. He never got tired throwing double or triple as many punches as his opponent. Duran’s overall strength resulted in his monstrous stamina.

Tomoyuki Kataoka and Joe Koizumi helped co-ordinate and translate this feature. The Ring appreciated their assistance.